Home Features The Rainbow Nation is a lie, and other lessons from the 2015...
WhatsApp
Facebook
Twitter
Email
Print 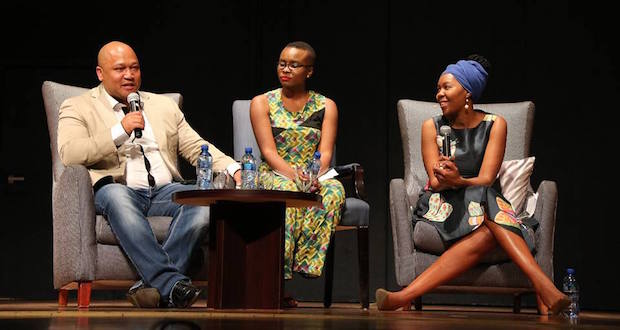 1. Black women are here to stay – and to slay!
The rise of black women to claim their space in the media landscape, and ultimately in South Africa, is not only evident in their visible presence within at the lecture but also in the fact that both Ruth First fellows are black women. #BlackGirlMagic

In both their talks, Chigumadzi and Msimang referenced various black women who are emerging voices within the South African discourse.

“I chose this genre because I wanted to signal that there is a new generation of contemporary thinkers – people like Milisuthando Bongela, Danielle Bowler, TO Molefe, and others who are cited in this work, whose words are as much a window into this country’s collective soul as those of Gordimer or Coetzee or Paton,” Msimang said.

2. White Privilege is real and it needs to fall
The existence of white privilege is one that is highly contested – usually by those who benefit from it but, Msimang said, it is the responsibility of both black and white people to pursue true reconciliation and authentic interracial friendships.

“For the white South African, who is surrounded by millions of black potential ‘friends,’ the implied question in Aristotle’s framing of the relationship between friendship and justice is, ‘Are you just’?”

3. The Rainbow Nation is a lie
Many vehemently agreed when Msimang suggested that we need to move away from the original version of the Rainbow Nation, into what she calls Rainbow 2.0.

“If we are to replace the distorted idea of the rainbow with a more honest but no less aspirational vision of dignity and respect, whites will need to give up their ideological and practical specialness and they will also have to reject the increasingly irrelevant, weepy and unhelpful mythology of Rainbowism.” said Msimang.

4. Black people’s anger is legitimate
During a brief Q&A after the lecture, Mbe Mbhele, a Wits student, expressed his anger and questioned why the event commemorates a white woman like Ruth First, instead of the likes of Robert Sobukwe.

In response to Mbhele’s comments, moderator Eusebius McKaiser said, “There is a massive difference between deep disagreement and swearing unnecessarily.”

But Chigumadzi disagreed with McKaiser and said that the anger and pain of black people cannot be policed or expected to look a certain way. “Black pain is not an academic thing, it’s an everyday thing,” she said.

5. Interracial relationships are still fraught
Chigumadzi and Msimang disagreed on whether black people and white people in South Africa can have real, meaningful relationships.

“I am not interested in having white friends or non-racialism at this stage. It cannot be fully achieved while we demand for our land back,” Chigumadzi said.

Msimang however said she will keep striving for authentic interracial relationships.

“I refuse to give up on the notion of working towards a world in which these things [interracial friendships] do not matter. Can we be friends across these ‘racial’ boundaries? Yes we can. And no we cannot. Itâ€™s that simple and that complex.”

You can listen to the full discussion on the Wits Journalism site.