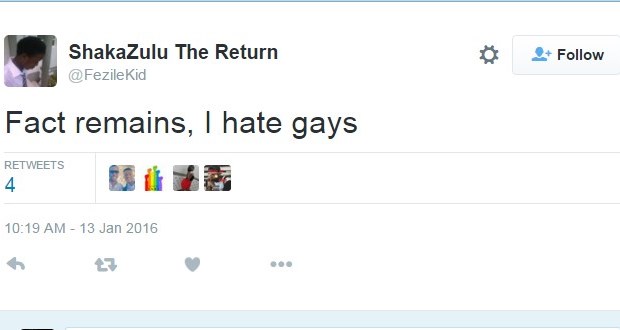 On Wednesday, a young man who claims to be 17 took to Twitter to declare he would rape lesbians to “turn them straight”. His tweets sparked a conversation about the culture of homophobia and misogyny in South Africa and, in particular, the risks faced by black lesbians. Mishka Wazar spoke to MATSHIDISI MOFOKENG from Tisa-Tshireletso about homophobia and hate crimes that such comments may inspire. Where does the idea of â€œcorrective rapeâ€ come from?
It comes from our culture and our communities, where people use violence against those who donâ€™t obey the laws of our culture, to show us that we are not “normal” to them. If a woman doesnâ€™t do what a man says, people think that she is competing with men. Rape and violence are used by these men to show us that we are not men and to “fix” us.

Do you personally know people who have been raped for being lesbian?
There have been many cases of lesbian rape in the country. There are many cases of lesbians and gay men who were raped and nothing was done. Hate crimes happen more often in some communities than others and I have worked with many rape survivors. There are many times when people try to cover up the assaults and the crimes, and we donâ€™t hear about them.

In your opinion, what can be done to alleviate the number of rape cases and hate crimes towards South African lesbians?
First of all, the government and the Department of Justice should try to raise more awareness about hate crimes and homophobia. We have government people who we work with but there is still a lack of awareness. There was a xenophobia march that happened not too long ago and our president paid attention to that, but there is less attention given to homophobia. Our government must pay attention to these issues because they have the resources to raise awareness.

Do you think the general South African community cares about trying to end the rape of lesbians?
Honestly, our black brothers are very angry right now. There is unemployment, poverty, lack of education and as the LGBT community we are trying to engage with our own communities. We can raise as much awareness as we want to but the communities refuse to change because there is a lack of dialogue. In South Africa, we use violence to be heard and recognised and in the black communities unemployment means that men have nothing to do. So to use up time, they target the vulnerable and they know that we are a vulnerable community. This makes it very difficult to engage.

Is the rape of lesbians classified as a hate crime in addition to being a criminal act?
We have a lot of trouble with these cases because when a perpetrator is caught we have to prove that the victim is a lesbian, which can be very difficult to do. We try to say that because of their sexuality, the rape of a lesbian is not an ordinary criminal act. We have had training and we work with people from the Department of Justice who are helping us because there are laws that we try to use and procedures to go through to have these rapes treated as hate crimes.

@FezileKid besides hating gays, you said you would rape people. You know that's a crime right? ?

@FezileKid Lololol go read your Constitution little child. Section 16. I'll wait. Ignorance is nothing to be proud of. And NOT attractive.

Is the issue of lesbian rape just about homophobia?
In reality, the issue is not about sexuality. We live in a patriarchal society and that oppression will always be there. As a woman you canâ€™t question the authority of men, you canâ€™t decide to get a job or leave the house without their permission. As lesbians, we donâ€™t live like that and we donâ€™t ask their permission. Some of us dress like men or act like men. Many men think they must â€œshowâ€ us that we are women and they are men, and they use rape to show us that they have control over us and we must act the way they want.

[box type=”shadow” align=”aligncenter” ]Despite being the first country in Africa to legalise same-sex marriage, South Africa has a shockingly high rate of “corrective rapes”.

A hate crime is â€œany incident that constitutes a criminal offence perceived as being motivated, in whole or in part, by prejudice, hate, or bias.â€ Because we do not yet have hate crime legislation, the true extent of this crime may be hidden, as it is not properly categorised in SAPS cases, making it difficult to pinpoint exact statistics. But there are numerous incidents of the murder of black lesbians.

While South Africa’s Equality Act protects citizens from discrimination, there is no specific legislation in place which protects victims of hate crimes. This is set to change this year however, as a draft of a hate crimes bill is set to be presented to Cabinet in February. The bill will protect members of the LGBTIAQ+ community from hate crimes and, “while not perfect, provide an important structural response to ongoing injustice against LGBTI people which can be built upon by activists,” says Matthew Clayton, Research, Advocacy and Policy Manager at LGBTIAQ+ research group Triangle Project.

When people like @FezileKid tweet about raping lesbians, we should not lose sight of the real-life consequences for lesbians in our community of this hate speech.

Just last month the body ofÂ Â Evaton lesbianÂ Motshidisi PascalinaÂ wasÂ found tied up, with eyes, breasts and vagina mutilatedÂ and her body set alight. Her family were only able to identify her by a tattoo on her leg. There was Eudy Simelane’s brutal rape and murder in 2008 – the South African soccer star was gang-raped, beaten, and stabbed in the face, chest and legs and her body dumped in a stream in Kwa-Thema. Lesbian couple Sizakele Sigasa and Salome Massooa were gang-raped, tortured and then shot in the head, execution-style in Soweto in 2007. In 2012, Phumeza Nkolonzi was shot at close range by a gunman who kicked her door down as she watched TV in Nyanga. [/box]