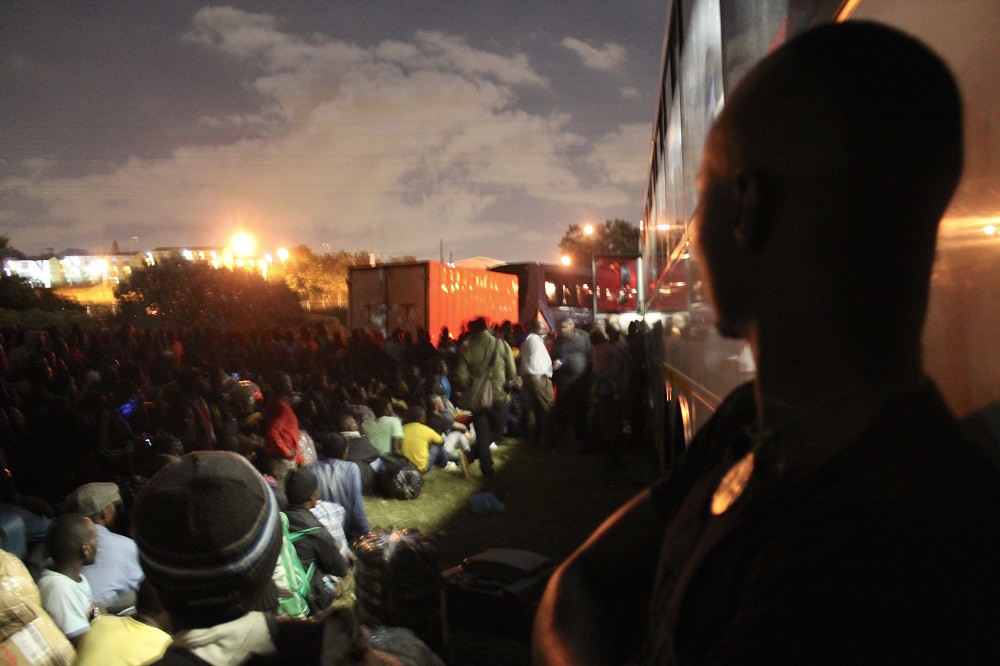 On Tuesday, about 1,500 Malawians were repatriated from the three KwaZulu-Natal displaced persons camps. They were part of the first group of Malawian nationalsÂ to leave the camps for their home country, following a spate of xenophobic attacks in Durban. Many more faced the disappointment of having to spend another night at the camp due to the shortage of buses. QINISO MBILI visited the Chatsworth camp to find out how people felt about having to return to Malawi under such tense circumstances. Mike Naphane, tyre company worker, 25, Cavendish
I came here in 2007. They called a meeting for us in the community and they decided that all foreigners must go. This is when I left to the camp. I have been living in the camp for threeÂ weeks and I didnâ€™t like it. I am not happy to go back home because here I had started a life. Here I have a loving girlfriend â€“ sheâ€™sÂ South African â€“ and two children. I last saw her on Friday. Ever since I told her that I would be going back home she has been crying during every phone call. She wants me to go back to Malawi because she doesnâ€™t want the locals to kill me, but she is also sad that I have to go away from her and the children. She is not working and I donâ€™t know how sheâ€™s going to send the children to school anymore. Another reason I am not happy about going back to Malawi is that there is nothing for me there now. My parents passed away a long time ago; no one is waiting for me back there. I am going to return home poorer than when I left, that is a shame. I promised my girlfriend that I would come back to South Africa but that is going to be very hard because I wonâ€™t have money back in Malawi. I am now ignoring my girlfriendâ€™s calls because when she calls she just cries â€“ she canâ€™t even talk, and this breaks my heart. Twain Adam, fruit and vegetable seller, 23, Marianhill
I am going back home now because the South Africans are chasing us out. I hope they are happy now that this is happening. I am not ready to go back to my country; I have nothing to give my people back home. I came here because I wanted to afford my family a better life. Before this xenophobia thing arrived I was very happy. Everything was going well and I had settled in. I arrived here in 2013. I will never come back here again; I have never seen this amount of hate towards other people before. My family knows what has been happening here and have been begging me to come back; it will be nice to see people who appreciate me. Yassin Twaibo, embroiderer, 29, Marianhill
We were attacked in Marianhill; this is when I decided to come to the camp. Coming to this country was a big gamble and it is only now that I realise that I lost. Now I have to go back home empty-handed. What will my family say? Some of my relatives back in Malawi were jealous that I had come to South Africa and was making something out of myself. Now when I come back like this, they are obviously going to rejoice. I have only been here for three years â€“ the first two years were very hard as I was trying to start my business. Now things were starting to look up, business was booming, then this happens. I am very heartbroken that I have to go back home just when big things were coming my way. The only thing I am glad about is leaving the camp. My wife and baby have also been in the camp and my baby is sick now because of the camp conditions. Daniel Sainet, vendor, 27, Umlazi
I thank South Africa, I have seen enough. I will never come back here again. I was there when they petrol bombed an Ethiopian in Umlazi. How can people be so cruel? I will rather starve to death in my own country than to be killed like a dog here. I am happy to be going home now â€“ I am tired of this camp and this country. This is the second round of xenophobic attacks that I see in this country. I was victimised in 2008 while I was still in Johannesburg. This time I ran to the camp before they could get me. I know a lot of people who were brutally attacked in my neighbourhood; I couldnâ€™t wait for that to happen to me, not again. My mother was against me coming to South Africa in the first place â€“ I am just going to go back home now and make her happy. I will never return here. Jacqueline Stephen, vendor, 29, Thornwood
I am not happy to leave this country at all, as cruel as it is. When they came to my place atÂ midnight last weekend, I just lifted my hands up and got out of the house. They went in and took everything and when they came out they tried to rape me. This is when I ran away and hid in the bushes. I stayed in the bushes until the morning because I thought they would come back for me. I woke up the next morning and headed straight here to the camp. Although the conditions in the camp were inhumane, I knew I was safe. Now I am going back home to my poverty-stricken society. I will no longer be able to support my mother. I used to send them around R1,250 per month. My family knows what is happening to us in South Africa; they had been calling and begging me to come back ever since the attacks broke out. They donâ€™t know that I am coming back now â€“ it will be a surprise. They will be happy to see me and I will be happy to see them, but I will be sad to not be able to support them anymore.

– Voxes have been edited for brevity and clarity.
– All images by Qiniso Mbili.