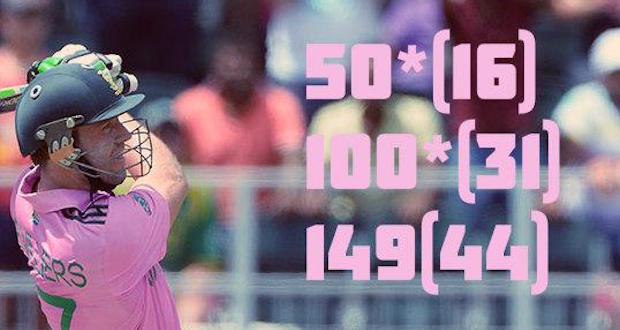 AB de Villiersâ€™ record-breaking knock during Sundayâ€™s one-day international against the West Indies had South African cricket-lovers all smiles. THE DAILY VOX team asked South Africans what they thought of the Proteasâ€™ performance. Sphamandla Ngongoma, 22, accounts manager, Rondebosch, Western Cape
It was obviously amazing. Iâ€™m amped for the ICC World Cup now, even though the Proteas are known to choke. I believe they showed something that theyâ€™ve never shown before yesterday, and they had a hunger that Iâ€™ve never seen before. Iâ€™m happy for AB, and Iâ€™m happy for our squad. If our top three can do that, then going forward I think we can win the World Cup, finally. Believe it! Thatâ€™s one thing that unites us: sports. Weâ€™ve had hard times, but when it comes to sport, thatâ€™s the only thing that unites us as South Africans and I believe itâ€™s the only way we remain united. Jill Patel, 40, secretary, Plumstead, Western Cape
It was amazing. Just the way [AB de Villiers] scored those runs â€¦ I was very proud of De Villiers and our players. It really inspires me. Look at the team: itâ€™s not just white or black, thereâ€™s a real mix, and that makes me proud â€“ that makes me want to watch cricket because it shows that we have made strides. Lungani Mnguni, 22, student, Umlazi, KwaZulu-Natal
The Proteas have upped their game from their previous matches. In past matches, we had individuals winning us the game. Looking at yesterdayâ€™s game, team effort and dedication saw the men in green and gold through. And it was an outstanding performance from AB de Villiers breaking the record â€“ recording the fastest century from 31 deliveries. I feel that was a super performance. We are combat ready for the World Cup! Jan Jordaan, 65, NGO director, Durban, KwaZulu-Natal
The Proteas were brilliant yesterday but I felt sorry for the West Indies, you know, because they are brilliant cricketers. AB de Villiers was just amazing, not normal at all. If the Proteas play like they did yesterday during the upcoming World Cup then I obviously donâ€™t think anybody else can beat them. If they donâ€™t play that well then they will still be in the top three. The Proteas are one of the best of the One-Day Internationals and thatâ€™s not going to change anytime soon, not with the present team. Eunice Botopela, 64, domestic worker, Tembisa, Gauteng
It was my first time watching the cricket live and when I entered the gate, I felt like jumping and crying, because it was my first time at Wanderers. During the match, I felt like I was in heaven when I saw our guys play so very well. When the match started they were scoring slowly, and I started to think weâ€™re going to lose, but from there Amla and Rossouw scored very fast and the runs went higher, higher, higher. And then came AB de Villiers â€“ yoh! AB for me is the best man in the world, the way he played the balls. I think we are going to win the World Cup. All our guys are perfect â€“ I know the guys are going to work very hard, because even now theyâ€™ve shown us what they can do. Natalie Cook, 50, hair stylist, Parkview, GautengI didn’t watch the cricket yesterday, but I heard about how fantastic it was! But even before hearing about it I knew they would so well â€“ I always expect South Africa to do well in cricket, and they usually donâ€™t disappoint. We have great sports people in our country and I always support the sport, even the soccer. Generally I support sport more than politics in this country. And without a doubt, we have more than a good chance for the World Cup! Â Iâ€™m more of a book man, and Iâ€™ve been to one sporting event in my life (a soccer match back in 1976), but even I know about how well the Proteas played yesterday. They did really excellently yesterday, and I definitely think that for nation building itâ€™s great â€“ especially for the youth.

* Voxes are edited for brevity and clarity.