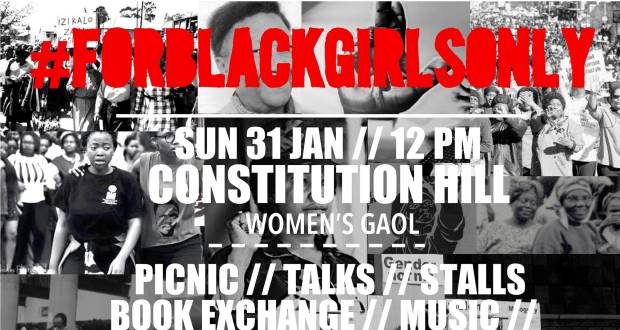 With #ForBlackGirlsOnly Johannesburg just around the corner, racist and sexist assaults on the necessity of a safe space for black women abound. KABURA NGANGA attended the Cape Town version of the event in 2015 and knows how necessary For Black Girls Only was in helping her heal.

For Black Girls Only in Cape Town will linger in my mind for years to come. Not because there were stunning black women looking amazing in all-black outfits. Not because we had important conversations about our own stake in cissexism and homoantagonism. Not even because amazing black women like Tiffany Mugo, Sivu Siwisa and Lihle Ngcobozi served us life. Simply because, in those few hours, we felt like we could breathe.

If you donâ€™t know what it feels like for the world to be trying to strangle you all the time, I am envious. That world that you live and love in is a very different experience for cis and trans black women. More times than we can count, it feels like we do not live and die in the same world as everybody else. We die invisibly, melted into impersonal statistics. We count and recount our stories of harassment and abuse and, even when we gasp for air in between it all, we are at best an irritant.

Resistance to systemic violence takes many forms, and though I have been in many activism spaces, my psyche was healed immeasurably at For Black Girls Only. It was an act of survival, a refusal to bow our heads to the cissexism, patriarchy and racism. It was an act of rebellion – we were forging on, uninterested in the contempt of our oppressors.

So really, itâ€™s no wonder that For Black Girls Only has had such a big splash – it forces some very uncomfortable conversations that some people do not want to have. It means that we need to ask ourselves what kind of cistem* we live in that requires such a space, who makes it impossible for us to live and breathe in the same world as them, in the same events as them.

We spend far too much of our time fighting through systems of oppression from all sides, in all forms, and from the people who proclaim to love us. It is painful and dehumanising. So once in a while – and thankfully a lot more in these days of intersectionality – we resist, we rebel, we live. We are holding each other in ways we never could before, loving one another and living in our magic.

So excuse me if I care very little if you are irked by the beautiful sea of pictures from the two For Black Girls Only events floating around your timeline because you are not a black cis or trans woman or non-binary person yourself. We are learning to live here, finding ways to breathe and love one another and if that only saves one black girl from the perils of self-hate and from the burden of your expectations and angers the rest of the world – we have done what we set out to do.

*Cistem – a systemic investment in the use of the gender binary, an insistence that sex determines gender and an often ideologically and physically violent refusal to imagine that some people live outside of this system.

#ForBlackGirlsOnly Joburg takes place at 12pm on Sunday 31 January 2016 at the Womenâ€™s Gaol on Constitution Hill. As the name suggests, the event is only open to women of colour. For more information, email forblackgirlsonly@gmail.com or follow @ForBlackGirlsSA on Twitter.

Kabura Nganga is a young feminist researcher for the African Gender Institute, a member of UCT: Rhodes Must Fall and interested in the politics of postcoloniality, queer identity and African literature.