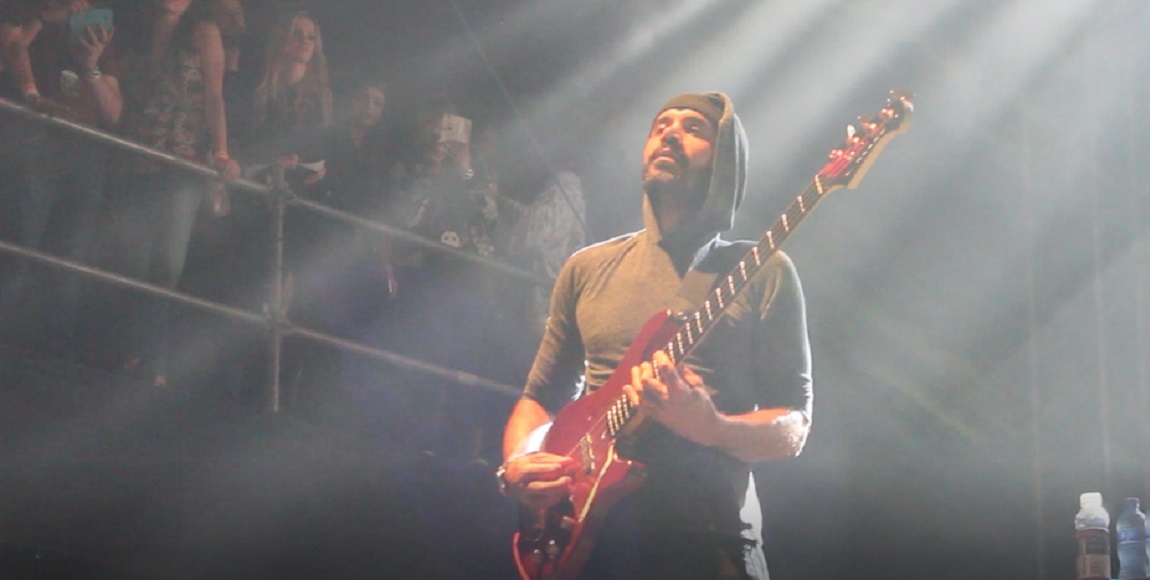 The Daily Vox caught up with alternative rock band Incubusâ€™s bassist Ben Kenney about an hour before their maiden performance in South Africa on Saturday, 24 February. We asked him about the importance of black children having black musicians as role models, Black Lives Matter, the Trump presidency, and his own personal attitude towards pirating their music.

Incubus is a world-famous alternative rock band from California, USA that has been performing around the world for nearly three decades. They have sold over 23 million albums worldwide and are a killer live act who absolutely slayed the energetic and expectant crowd in Pretoria. Incubus is unusual for an American rock band because it is incredibly racially diverse line-up. Of its five members, Chris Kilmore (DJ) and Ben Kenney (bass) are black, Jose Pasillas (drummer) is Latino and Brandon Boyd (vocals) and Einziger (guitarist) are white.

In addition to their widely acclaimed musical genius, their songs tackle serious political issues such as racism, confronting dictatorial US presidents such as George Bush, and praise for rogues and rebels who overcome societal apathy.

The Daily Vox (TDV): Incubus has been playing since 1991 and has travelled everywhere in the world but hasnâ€™t ever been to South Africa or anywhere else in Africa until now. Is there a reason for that? How does it feel to be here?

Ben Kenney (BK): Itâ€™s great to be here. Weâ€™ve wanted to come here for a very long time. Itâ€™s not the easiest trip to make for a band. We have a big crew we travel with and itâ€™s really far away. There arenâ€™t that many stops along the way that we can string along. Touring the USA for us is really easy. We just drive for four hours, play a concert, drive four hours [and] play another concert. To make it out here we had to fly for almost an entire day. We had one seven and a half hour flight and then a 10 hour flight. So thatâ€™s just to show up, you know? Thatâ€™s the main thing – itâ€™s just really far away.

TDV: Did you know that Incubus has a lot of fans in South Africa who are really excited to see you?

BK: We had gotten some buzz over the years. People had requested that we come down and play. But I guess weâ€™re going to find out in couple of hours what itâ€™s all about!

TDV: Do you care â€“ some artists do â€“ how people have been getting your music â€“ buying CDs or listening online or whatever?

BK: Itâ€™s great when the system is kinda supported because it allows us to have money to make more records. Personally, I just love it when people love the music. Thatâ€™s kind of the most important thing above all. So, whatever means you gotta do to do that, you know, if youâ€™re doing it Iâ€™m psyched.

TDV: Getting into the context of South Africa. There is a strong climate of racial tension here historically and presently. Some of your songs deal with these issues. In the song â€œThievesâ€ for example, the band says â€œwhen will I get mine, must I be a God-fearing white American?â€. Can you tell us a bit more about that and how it might connect with the South African context?

BK: Yeah, I mean for us weâ€™re artists you know. Kind of left-leaning people. We want to try to do things to take care of each other. When it comes down to it, weâ€™re not very greed motivated â€“ we are joy motivated. I think those two things are kind of visible when you look at politics and history. Some people are more concerned about profit than happiness. I mean general happiness â€“ happiness for others. Happiness you can share. Itâ€™s really tricky because the world is more out in the open right now about a lot of things than itâ€™s ever been. Itâ€™s kind of terrifying what motivates some people.

TDV: Can you tell us a bit more about how you grew up and how that has influenced your interest in music?

BK: I grew up about an hour outside of New York City. My family is great, really special people. My mother is a white American, my father is a black American. In my neighbourhood there were other mixed kids â€“ it was probably about 80% white and 20% black. For the most part we got along. I didnâ€™t realise how the rest of the world worked until I started leaving the nest and travelling to different places and meeting other people. I was kind of sheltered from it and thatâ€™s why I think it bothers me more now.

TDV: From a South African perspective, which is a very racially diverse country, we get a lot of major rock bands coming here with exclusively white musicians. Itâ€™s noticeable that Incubus is a lot more diverse in its members than most of these bands. Is that important to the band and how it produces its music?

BK: I know for me, itâ€™s important to me. I didnâ€™t have as many brown-skinned role models doing what I wanted to do as I had white role models. I wanted to play guitar and be in a rock band and do all this stuff. It wasnâ€™t exactly the normal thing. So if there is any chance that we are that, and people with brown-skin can see us and then see themselves doing it, then maybe that opens up possibilities in their minds. Then I think thatâ€™s important. Because when youâ€™re young and you donâ€™t see anybody that looks like you doing something itâ€™s hard to imagine yourself doing it.

TDV: What are your personal feelings on the current racial tension and movements like Black Lives Matter in the USA right now?

BK: I think black lives are very, very important. I think they matter very much to me. Most of my family is black. Itâ€™s hard say anything about it that doesnâ€™t upset people. People get upset in either direction. Either youâ€™re not firm enough or whatever. But, I donâ€™t know. The things that are being brought up now are the first steps towards making things better. And things are really fucked up. The old way of doing stuff is more visible â€“ itâ€™s disgustingly visible, and Iâ€™m not a fan of it.

TDV: We all know in South Africa what is going on politically in the US right now with the Trump presidency. Incubus as band has dealt directly with political issues in its music. The song and video for â€œMegalomaniacâ€ is a good example. Is there anything you want to say on that to people here who are very concerned? Does it influence your music at all?