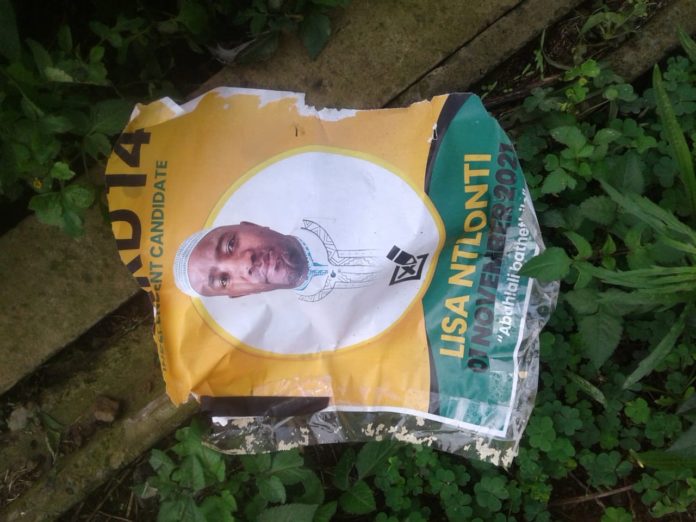 Lisa Ntlonti is an independent candidate running for Ward Councillor in Buffalo City Metropolitan Municipality (Ward 14). On October 13, Ntlonti released a press statement stating that he was accosted by the African National Congress (ANC) while campaigning. He said he has been subjected to threats ever since. The Daily Vox spoke to Ntlonti about his experiences.

A municipality in the Eastern Cape, Buffalo City is an African National Congress (ANC) stronghold. With the 2021 local government elections just over two weeks away, controversy is afoot in Buffalo City. Ntlonti said he has been subjected to threats and insults from the ANC.

Ntonti’s journey into the political arena has not been entirely pleasant. In the press statement released, Ntlonti explained that he has endured threats from the ruling party for several days now.

Members of the ANC allegedly ripped posters put up by Ntlonti and his team in Mdantsane. One incident reportedly saw ANC members plastering an ANC campaign poster over one of Ntlontli’s posters. Over and above damaging his campaign posters, members of the ANC have reportedly  threatened Ntlonti. Ntlonti said the ANC candidate for Buffalo City told him on more occasions than one that she will “show [him] who she is.”

“Lisa Ntlonti has been subject to all forms of insults. Last weekend we were putting up his posters and a gathering of ANC people then drove around the ward describing Mr Ntlonti as a boy over the loudhailers and describing him as an indecent person,” Kholiswa Tyiki told The Daily Vox. Tyiki is a supporter of Ntlonti and has been assisting him in dealing with threats from the ANC.

An activist, Tyiki has reached out to several organisations, including My Vote Counts and the Working Class Eastern Cape Summit. These organisations have assisted in directing the attention of the electoral court toward Ntlonti’s situation.

Tyiki believes that the threats have a sinister agenda. He said the ANC wants to negatively impact Ntlontli’s image to ensure that they receive votes instead. Threats hurled at Ntlonti by the ANC have been reported to the Independent Electoral Commission (IEC). The Daily Vox has reached out to the IEC for comment. The piece will be updated once received.

Where will he go from here?

Ntlonti, along with the support of his team, has opened a case against the members of the ANC who have threatened him. He firmly believes that the results for the upcoming election will not be affected by him opening a case against the ANC.

“It is up to [the residents] to vote for who they please,” said Ntlonti. Ultimately, Ntlonti believes that the ANC has violated the electoral code of conduct. He said they have done so by damaging his campaign materials and defaming him on their campaign trails.