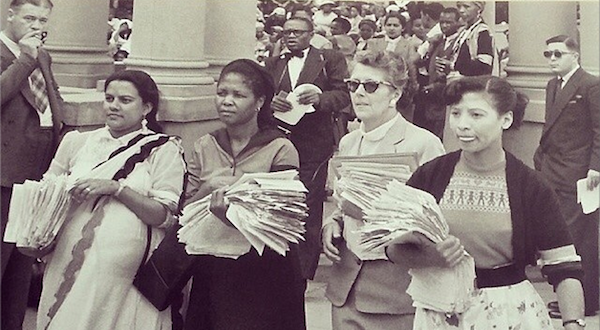 INDIRA GOVENDERÂ reflects on whether you need to display “struggle credentials” before you can speak on racism and injustice in South Africa.

Mishka Wazar’s columnÂ about whether or not Indians can or should identify as black reminds me of a conversation I once had with a white supervisor.

I was working for an international NGO based in South Africa and my supervisor was a foreign white man who had spent all his time here working and living in Cape Town. We used to have many honest conversations about politics and life but his opinions were shaped mostly by white liberal media, the kind you find a lot of in Cape Town. Despite having spent years working in Khayelitsha, he lacked a certain depth of understanding and insight because of his sheltered white privilege and white ignorance. Which is not surprising, because the average foreign white aid worker based in Cape Town just doesn’t get it. Back then, I tolerated much of his naivety because I respected him as a person. Until one day, in the heat of an argument about the state of South African politics, as the cracks in the facade of the organisation started to show he said to me, “But why are you complaining? It’s not like your life is a struggle”. I don’t remember what that argument was about but I’ll never forget that line, or the way it was nonchalantly tossed in my face.

You see, this is what whites and certain privileged groups of South African Indians like to believe. That because you have not directly suffered some injustice, you have no legitimacy talking about it. (Alternatively, and less obviously, they believe the struggle doesn’t exist and their lives are just better because they made the right choices.) Does that mean I have to start every opinion I express on race or racism or social injustice with a list of personal anecdotes that I or my family have suffered before I have any real right to express it? Because I am the sum of my experiences and the political education I received in my home and community. And I’ve chosen to identify with the ongoing black struggle because I recognise how fortunate I’ve been, that my life and freedom would not be possible if others hadn’t sacrificed their own lives and freedom, and that many people still struggle against poverty and unemployment and a lack of access to amenities the rest of us take for granted.

This awareness of where I come from, how I got here, that others are still struggling and that those of us who have now should be actively working to help those who don’t have, is my black consciousness. It’s how I live and it’s the spirit I take into everything I do in my work as a rural doctor and in my life. The Black Consciousness movement of Steve Biko did much to unite and empower people of colour against apartheid ideology in South Africa, and I would add, to liberate South African Indians who were trapped in “caste system” beliefs about the colour of their skin. Sadly, not much of that awareness remains amongst the Indian community, and I distance myself from township-life nostalgia because of the racism it often invokes towards other race groups and Indians themselves.

This also speaks to the issue of “struggle credentials” and those individuals riding high in post-apartheid South Africa on their role and personal sacrifices during the struggle for liberation. What are they doing in our current climate of escalating racial tensions, xenophobia and tribalism to advance Black Consciousness and dismantle white privilege? Or is this now left to racist rants on social media and seething mobs on the street to figure out? More black pain and white tears, more banging your head into brick walls and then wondering why you even bothered.

I never did get to answer the question from my supervisor; I was stunned into silence by the arrogance of his assumptions. So I’m going to say this now, if you find yourself working for or engaging with an organisation in South Africa that avoids issues of race and racism, then you’re probably not going to achieve anything meaningful with them. Organisations and individuals who don’t want to acknowledge this will forever remain on the surface and outskirts of the South African discourse, never quite relating to the subjects of their charity and research. And foreign NGOs that are responsible for employing significant numbers of South African national staff shouldn’t underestimate the wokeness of their employees either, no matter the job description. Some of us may not be as articulate as others but the issue of race in South Africa is a hot potato, and when it lands in your hands you better know where you stand or be prepared to say you don’t know but that you’re willing to talk about it.

Indira Govender is a medical doctor based in KwaZulu-Natal and she’s not into talking about herself. But if you want to chat, you can find her on FacebookÂ or Twitter.