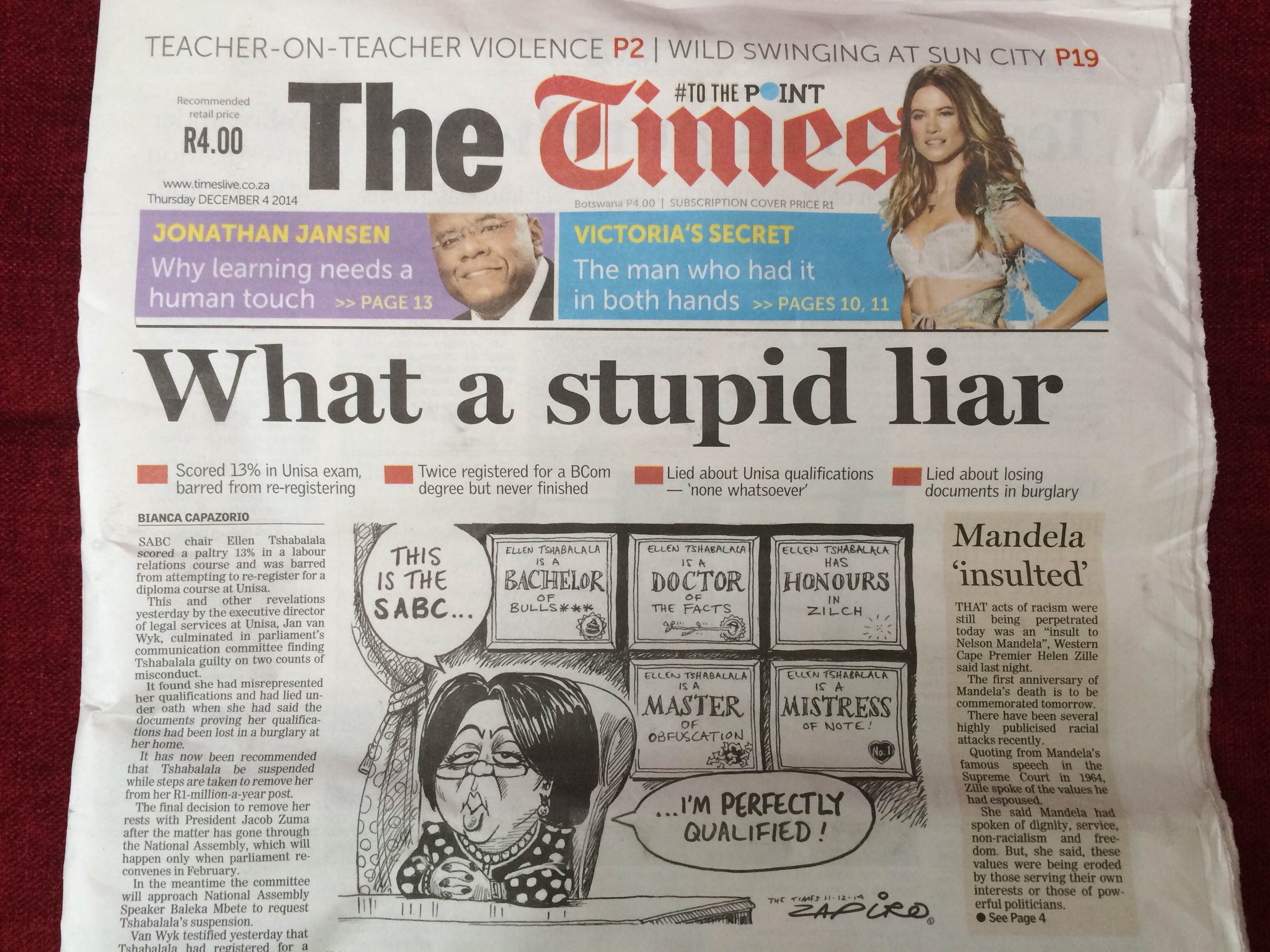 @becsplanb not a fan either. Abusive ad hominem, adds nothing to story, betrays bias.

For the record then, we’d like to strike “stupid” from reference toÂ Tshabalala here.

What the Â Times article does indeed do is detail the fact that Tshabalala has been found guilty of misconduct by parliament’s communications committee. Tshabalala has been found to haveÂ lied to Parliament about her qualifications. Her case, of course, comes in the wake of Hlaudi Motsoneneng, the public broadcaster’sÂ chief operations officer, who liedÂ about his matric qualification. Â It was Tshabalala, incidentally, who facilitated Motsoneneng’s Â appointment, even extending his appointment until the end of 2014 despite the findings detailed inÂ a Public Protector report .

People at the SABC who are not qualified to do their job include HlaudiMotsoeneng, Ellen Tshabalala and the entire cast of new Generations. â€” Deep Fried Man (@DeepFriedMan) December 3, 2014

AndÂ while we are grateful to Deep Fried Man for finding the funny bone here, this latest iteration of the fake qualifications saga is anything but a joke.

So, what do we need to know about Ellen Tshabalala? Well, here is what the Communications Portfolio Committee found after hearing evidence:

1. Although Tshabalala had claimed to be a UNISA graduate, she had not obtained any qualifications from the institution.
2. In 1988, Tshabalala had registered for a BCom degree. She dropped out of the Business Economics 1 course, did not receive entry to write the Economics 1 exam and also failed Industrial Psychology 2.
3. In 1996, she tried to register for Business Management 1, Introduction to the Economic and Management Environment and Industrial Psychology 1. In August of that year, however, UNISA cancelled her registration due because the Matriculation Board refused to renew her conditional exemption certificate
4. In 1995, Tshabalala registered at the Graduate School of Business Leadership for a one-year Labour Relations course. She passed only two out of the six modules, and therefore again did not complete her qualification.

The Committee had found Tshabalala guilty of misconduct for lying about her qualifications. She had claimed that she couldn’t provide certificates because they had been stolen in a burglary and she further asserts that the Unisa records have been doctored to reflect poorly against her. She insists her legal representation need more time. The Committee says they’ve given her more than enough time.

Well, in terms of the Broadcasting Act, it is the presidentâ€™s prerogative to decide whetherÂ she stays in her job, or not. For now at least, it seems it’s up toÂ JZ to decide whether Ms. Tshabalala is indeed a “liar”.