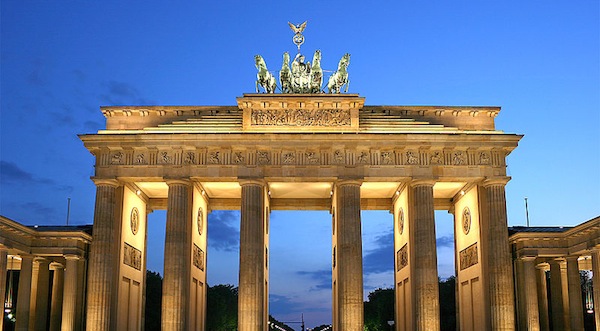 Berlin, Germany – Across Germany red, black and gold color the streets of bustling cities and quaint village towns. Flags are pinned and draped on cars, while tricolored top hats and garland necklaces hang loosely around necks and flowered bracelets adorn the wrists of Deutschland supporters. The excitement and anticipation of Sundayâ€™s World Cup Final against Argentina is hard to escape. The game dominates the headlines and idle chatter overheard in Berlin’s cafes focuses on the game, the after-party and the promised victory paradeÂ at the cityâ€™s famous Brandenburg Gate if Germany bring the Cup home.

Brimful of confidence after Germanyâ€™s dramatic 7 – 1 defeat of World Cup hosts, Brazil and with the memories ofÂ  the 1990 World Cup final – a 1- 0 victory against Argentina – on the minds of many, could this game wonder be a repeat of history for Der Mannschaft or will La Albiceleste triumphantly settle the score 24 years later?

Eleven men carry the hopes of a nation, onto the pitch today. THE DAILY VOXÂ spoke to football fans on the streets of Berlin. This is the most important game for Germany in 24 years and I’m very optimistic we’ll win, but you can never be certain with football. I think the team has a good chance as they have a good coach and most of the players play for big European clubs. Of course Argentina have Lionel Messi and Pablo Zabaleta and Ãngel di MarÃ­a, but at the moment Germany has a strong team, not just individuals.

If we won it would be important for the country because we’ve been waiting 24 years for this moment. Some people say football is Europe’s substitute for war and some use football in bad ways, like the hooligans in England or Holland or the nationalists here. You have fanatics everywhere. But for our country, football has been a good way of creating national unity as itâ€™s better to fight on the pitch than with weapons. I think we could win. I’m confident of the team, they work well together and have a good team spirit. Some players like Thomas MÃ¼ller really want this but Manuel Nueur is a brilliant goalie so it won’t be so easy.

Some people are worried about the revival of nationalism with the World Cup and if Germany do well it might not be good for us, but the only time people feel they can be proud of being German is when we play soccer. This time itâ€™s been a good feeling and it’s a different World Cup so I think we are over that and if our team win it might actually be a chance for us to finally show some national pride. Iâ€™ve lived in Germany for 30 years and Iâ€™ve supported the team since 2002. Theyâ€™ve developed very well since 2006 when some of this teamâ€™s players – PhilipÂ  Lahm, Bastian Schweinsteiger and Lukas Podolski – played in their first World Cup. Germanyâ€™s starting line-up is filled with players who have World Cup experience so they have an advantage, I think theyâ€™ll win 3 – 1, with goals from Miroslav Klose, AndrÃ© SchÃ¼rrle and MÃ¼ller.

This game will not be as easy as Brazil, Argentina will play a very defensive game but Germany will win. The German players are not under as much pressure as the Argentinians so they can do well. If Germany loses the country will be sad, but itâ€™s not as if the world will come to an end. But if Argentina lose, the country wonâ€™t take it well. We want to be modest, but we think Argentina will win. It will be a difficult and long match so they have to play really well. This game is similar to a game of chess, itâ€™s about strategy and our team has to think and execute well. The first mistake defines the match.

We have a team of players, not only Messi. He will be surrounded by the Germans but the rest of the team can play and make the difference. Javier Mascherano is a lion and Sergio Romero is also another key player.

In the last two World Cups, Germany beat us and now we face them in the final so if we beat them it will be a great victory for us. We havenâ€™t reached the finals in 24 years so if we win this game it will be amazing for our country. Football is the sport of the nation. All the energy and good vibes coming from Berlin are going to help them win. I have been told there is only one definition of football, itâ€™s a game of 11 eleven players on each side, they play for 90 minutes and in the end Germany usually wins.

The German national team is in much better shape than Argentina, they have played really well in this tournament. But Argentina have the advantage of playing on their home continent. If Diego Maradona were playing for Argentina then they would surely win because he uses the hand of God. Germany will win because they have played so well, especially Klose and MÃ¼ller. I predict a 3 – 1 victory. It’ll just be the game, no penalties. Although Argentina have Messi, one man canâ€™t change the game.