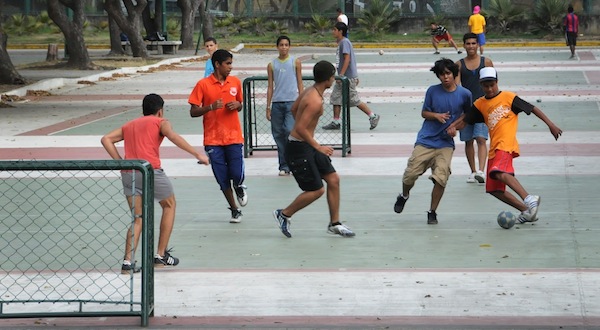 A Brazilian in South Africa speaks with MUHAMMAD SHEIK about football, poverty and the World Cup.

Marko Gimenez (26) wore a green golf shirt and flashed a huge smile the day we met. His cheerful personality overshadowed his massive frame and he smiled all through our hour-long conversation at a local cafÃ© on Durbanâ€™s Florida Road last week.

Gimenez, a software programmer, hails from Brazil â€“ a nation known for producing some of the best players on earth â€“ butÂ when we met last week, he didnâ€™t think Brazil would take footballâ€™s most coveted prize this year.

â€œMy money is on the Germans – technically the best outfit at the World Cup – and they have the players to take the trophy. Brazil have become a team centered on Neymar. He is still young and while he is brilliant and can score goals, other players must be allowed to shine also,â€ he told me.

â€œAlso my wife and children support Germany and I donâ€™t want three people saying that they told me so on July 13.â€

Giminez wasnâ€™t wrong. Neymar crashed out of the tournament in the quarter-finals owing to a back injury, and Brazil crashed out even more spectacularly after a 7-1 routing by Germany in the semi-finals.

He told me about coming to South Africa at the tender age of 17 with his uncle, leaving his home and family behind, landing a job as an â€˜office boyâ€™ for a big software firm and, nine years later, heading up his own division in the company.

He, his wife Maria (who was born in South Africa) and their two children Abel and Aksara live in the plush suburb of Glenwood in Durban. His skill set is unique, but his perspectives on football echo those of thousands across the globe.

Gimenez hails from Recife, the capital and largest city of the state of Pernambuco in the South American nation, and a city rich in a history of football participation.

He recalled his childhood playing football with his friends. “It was fun. We were all very good soccer players… almost all children in Brazil are. But making it your career is difficult,” he said.

Poverty and unemployment now drive young people in his city to pursue what he calls ‘practical careers’ because “if you’re not from a football connected family, forget playing at national levelâ€.

â€œYou look at the Ronaldos and Robinhos… okay, maybe these guys were scouted, they are the exceptions, there are always a few, but people don’t realise just to be scouted you need to make it to a certain level, and many kids from rural areas won’t be able to make it that far. Money to travel is a lot and it’s needed for food not for soccer,” he said.

To the working class Brazilian family, Gimenez said, the spectacle of the soccer showpiece will quickly fade once the World Cup is over and the teams head back home.

“Everyone is enjoying the atmosphere now and itâ€™s great because as Brazilians we love football, but at the end of the month despite the World Cup, people will still be unemployed, the cost of living will be the same or maybe even higher and the money that comes in goes into the pockets of officials not people like you and me,” he said.

As our conversation drew to a close, Gimenez gave me a warm handshake, saying â€œSorrir mais, homem bom.â€ I later found out this meant â€œSmile more, good man.â€