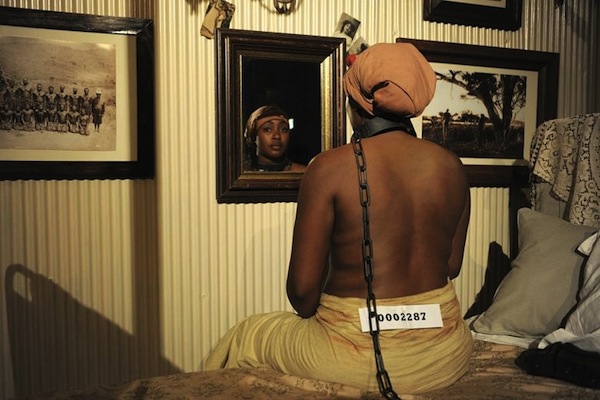 The theatrical production Exhibit B â€“ The Human ZooÂ claims to challenge the idea of 19thÂ century human zoos. Instead South African theatre director Brett Bailey has recreated the debased portraiture of black people and the racist, dehumanising spectatorship of human zoos.

In his exhibit, which is supportedÂ by South Africa’s department of arts and culture, Bailey locks black men in cages with sign posts reading, â€œThe blacks have been fedâ€ tacked on. In another installation, a black woman is portrayed as a coloniserâ€™s sex slave waiting to be raped.

â€œWhat interests me about human zoos is the way people were objectified,â€ Bailey toldÂ The Guardian.Â â€œOnce you objectify people, you can do the most terrible things to them.â€

But there is no critique evident in any of the portrayals. Instead, they are regurgitated reenactments of the racialised human zoos that turned black people into freaks of nature for the entertainment of European spectators. Bailey simply objectifies black people once again.

Exhibit BÂ has been showcased all over Europe and is currently a feature of the Edinburgh International Festival 2014.

While some observers enjoyed the piece, the theatrical montage has come under fire, with an online petition calling for the withdrawal of the â€œracist exhibitionâ€ from a show in London.

Baileyâ€™s exhibit is said to be a challenge to modern day racial profiling and deportation. But his work has affirmed human zoos in a way that has left even his performers uncomfortable.

One actress who portrayed Sara Baartman, a Khoi woman who was caged and displayed in Europe during the early 1800s,Â has beenÂ ogled and laughed at.

â€œAÂ bunch of guys came in. They were laughing and making comments about my boobs and my body. They didnâ€™t realise I was a human being. They thought I was a statue. Later, they returned and each one apologised toÂ me in turn,â€ she toldÂ The Guardian.

â€œHow do you know we are not entertaining people the same way the human zoos did?â€ asks anotherÂ performer.

– Image via the Edinburg International FestivalÂ