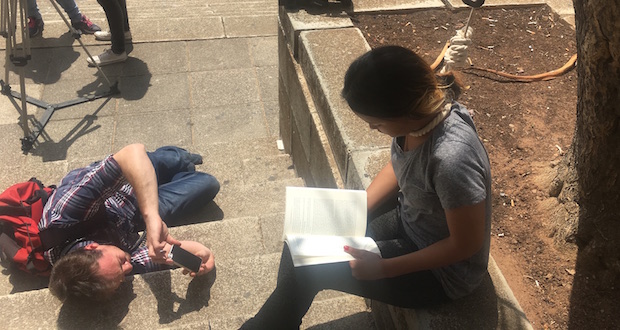 As a young journalist covering the #FeesMustFall movement, Iâ€™ve written both on my experiences of abuse by private security, as well as my difficulty reconciling the relationship between police and protesters.

But theÂ topic thatâ€™s hot within newsrooms right now, and on the ground among reporters, is the antagonistic relationship between the media and student protesters. Itâ€™s an important discussion.

News 24â€™s Adrian Basson has written about the violence, threats and intimidation reporters have faced from students.

The fact is that many students have a distinct mistrust which often manifests in an aggressive attitude to the media during protests. By now most reporters are familiar with exclamations of â€œMedia leave!â€ and â€œFuck off media!â€ – an example of some of the milder expressions directed at journalists.

Yet, as someone who until a few months ago was also one of these students, I do also understand how the hostility developed.

Why are students hostile to the media?

The general sentiment among protesters is that the media tend towards casting students as irrationally violent, aimless hooligans – a destructive and regressive force in an already unstable South Africa. Or, they are characterised as misguided youth, impervious to critical thought and in need of firm reprimand before they harm themselves and others. Thus the feeling among student protesters is that the media tend towards telling only one side of the story – paternalistically so.

It is in situations like the current studentsâ€™ protest that the inherent weaknesses of the media are also revealed.

We prefer action and scandal over complexity and nuance because they sell papers and increase page views – it makes money. When it comes to the studentsâ€™ movement we have often failed to capture the complex, and often ambiguous, dynamics at play.

This narrative of violent students has become the dominant opinion with the general public – it’s uncertain whether the media inform this narrative or pander to it.

The media doing the most to paint the #FeesMustFall protests as violent and destructive.

Do students respect freedom of the press?

Yet students must also recognise the importance of media freedom as an enshrined right for legitimate reasons. By keeping the public informed and gathering varying perspectives and factual evidence, the media plays a critical role in keeping entities accountable.

While this applies to students – it also applies to dodgy factions, private security, police, university management and government. In fact, one of the best ways to ensure students arenâ€™t abused is by having media close by. It’s for that exact reason that reporters – I was one of them – were assaulted at UJ. We posed a threat to the impunity with which private security act towards students.

None of this is possible if media are not free to work unencumbered by intimidation and fear of violence – from all parties.

Reports that #UJ is restricting media access to campus. Clamping down on the media is a dangerous scenario for all concerned. #FeesMustFall

Do the media respect students?

On Tuesday, I watched footage of Wits protesters removing their clothing and begging the police to stop shooting at them. It was an emotionally charged scene of bare-chested women in tears, laying themselves bare to armed police officers. Yet as this scene unfolded, what I was struck by was the swarm of photographers, cameramen and reporters surrounding these women – faces masked behind equipment, shoving at each other to get the winning shot.

This made me feel ill.

#RememberKhwezi protestors plead with cops: ‘We are women stop shooting at us’ #Wits #Fees2017 pic.twitter.com/raHNxomzch

A colleague later told me that after the incident, a male reporter approached her and casually assessed the women’s bodies – commenting on the variety of their cup sizes.

This made me feel even more ill.

The incident and footage left a lasting impression on me. It spoke to how removed, voyeuristic and dehumanising the mediaâ€™s attitude towards people can be.

Iâ€™ve begun to wonder to what extent we care about the subjects we capture. Is our focus on telling accurate human stories – or are we just there so we can land the winning story, pictures and video?

My concern is that we are in the business of treating people and their stories as commodities – peddling segments of their lives for headlines, pageviews, retweets and shares. Thereâ€™s something broken about us if this is the case.

Stud: come cover this
Media: is they any drama? Arrests or injuries?
Stud: No!
Media: okay tell us if they is any drama
#FeesMustFall

And often, the studentsâ€™ hostility towards media is indeed justified.

As much as the media might aspire to be objective, neutral parties, even a 1st year media studies student knows that this is not the case. The media are not impartial, and it’s no secret that media houses have identifiable leanings. Students are not unaware of this. Theyâ€™re sensitive to political slants and immensely aware of the effects these narratives have on the publicâ€™s sentiments towards them – such as the willingness to accept the use of force on protesters.

In my experience, people who feel othered are the least likely to respond well to people in the media.

So perhaps it’s not simply a matter of media having to choose between reporting from the periphery or choosing a side, as Basson suggests. I think thereâ€™s room for accurate and critical journalism that still respects and empathises – while not necessarily agreeing – with individuals, their backgrounds and aspirations.

In this way perhaps the media can take a lesson from students and activists. We may need to critically reflect on the way our gaze, biases and commercial incentives affect our work and relationships with those whose stories we presume to tell.

Maybe it’s time we start thinking about what it would mean to decolonise media.