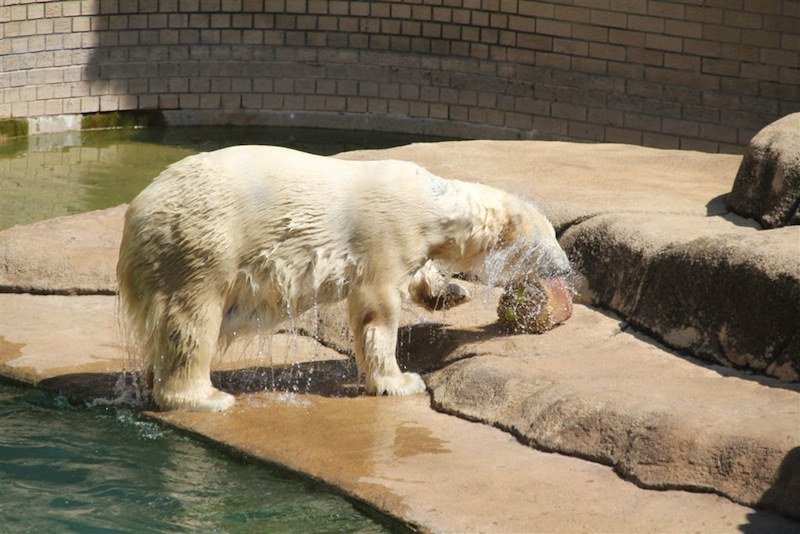 â€œHe weighed more than 300kg but he never used it to intimidate people. He never scared anyone off. He would come and look at you and enjoyed interacting with people,â€ Agnes Maluleke told me as she stood atop a boulder in the enclosure where Wang lived. Nearby there is a hammock, a jungle gym and a watery moat where Wang once played.

The Jo’burg Zoo has kept polar bears for decades, and had even bred polar bear cubs at one point, according to Maluleke. But Wang, and his partner GeeBee were to be the last polar bears on the continent.

Wang was born in 1985 and arrived in Johannesburg a year later. Maluleke worked with Wang for the last nine years of his life. Putting him down was not an easy decision to make.

â€œWe decided to put him down because he wasn’t well. In 2010 we did tests and discovered 70% of his liver wasn’t functioning,â€ she said. Then in January the zoo discovered that Wang had multiple organ failure.

â€œWe tried our best to give him medicine, but we knew it was just a matter of time,â€ she said. When the zookeepers looked in on Wang on Wednesday morning, they realized there was nothing more they could do for him, Maluleke said. But the decision to put Wang down was not an easy one to make.

“As much as we knew that he had multiple organ failure, it doesn’t give you the right to put an animal down. You go home asking yourself, â€˜Did I make the right decision?â€™â€ she told me.

Wang had struggled to adjust after GeeBee died earlier this year.

â€œAfter she died, he stopped eating. He wouldn’t go into the water because that was where she died – he associated water with something bad. We tried to help him cope, and eventually he did come around,â€ she said.

â€œI think Wang had a good life. He really enjoyed his life at the zoo.”

The zoo has not decided what will become of the polar bear enclosure but Maluleke said it might be used to house either penguins or seals.

Hundreds of people left messages of condolence on the Johannesburg Zoo’s Facebook page after receiving news of Wangâ€™s death. “We were there last weekend and my heart broke,” wrote Patricia Libenberg.

Kashan Krawitz-IrmakÂ wrote: “So sad! I always loved seeing the polar bears. Tragic that they are both gone. However they didn’t really belong here.”

Johannesburg Zoo employee Cherene Cherry Williams had known Wang a long time. “I had six years of memories looking after this awesome bear. He was a big softy and a real ‘gentlebear’. It’s so very sad, yet a relief that he is released of his pain and discomfort,” she wrote.

Polar bears are a threatened species. Itâ€™s estimated that there are between 20,000 and 25,000 polar bears left, and many of their populations are in decline.

According to the polar bear conservation group Polar Bears International, the single biggest threat to polar bears today is sea ice loss due to global warming. â€œPolar bears depend on sea ice for hunting, breeding, and in some cases, denning. In recent years, summer sea ice losses in the Arctic have been accelerating,â€ it says.

Researchers have found an increase in the number of polar bears dying of starvation in recent years and experts say that between half and a third of the polar bear population could be lost within three generations.

â€œIf there’s no intervention, we might end up with no polar bears in the future. It’s heartbreaking to talk about,â€ said Maluleke.