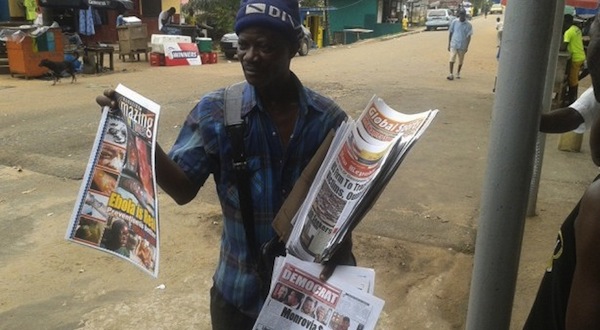 Journalists need to up their game in the way they report the impact of Ebola on Liberia, Guinea and Sierra Leone, says BERNADETTE PAULO, writing for AllAfrica. Arguing against the scaremongering generalisations often seen especially in Western media, she advocates being specific about the countries affected and reporting positive developments where they occur.

The world has to take the Ebola virus seriously given the toll it has exacted and stands to exact on countless numbers of people, most of which, thus far, are in Liberia, Guinea and Sierra Leone. Equally important is managing the fear this contagion is causing that may lead to determinations being made by countries that will further exacerbate the isolation and destabilization being experienced by affected nations.

In addition to rendering all possible forms of assistance to the three countries most impacted and taking preventative steps in countries with an isolated case or a few cases of Ebola, caution must be taken about reporting on this disease.

One way to do this is to stop referring to Ebola as impacting “West Africa.” Sixteen countries make up the region known as West Africa including Benin, Burkina Faso, Cote d’Ivoire, Cape Verde, Gambia, Ghana, Guinea, Guinea-Bissau, Liberia, Mali, Mauritania, Niger, Nigeria, Senegal, Sierra Leone and Togo. From reports on reputable networks such as CNN to testimony given by experts from many quarters, the terminology used is “Ebola in West Africa.”

Just as no country that has been severely impacted by this virus should be stigmatized or their borders closed, describing an entire region as being impacted can have serious economic ramifications.

Another way to mitigate fear is to report the positive developments in countries where the Ebola virus has been contained such as Nigeria where due to the efforts of health officials and authorities, the few incidences of Ebola that were discovered were handled quickly and effectively.

Avoiding mass hysteria
The first case of the Ebola virus in the United States was reported in Dallas, Texas on September 30. The Centers for Disease Control vowed that the disease will be stopped, posing no threat to the American public. There is no doubt that this contagion will be handled efficiently.

It is also not responsible for policymakers to suggest that flights from “West Africa” be banned from coming to the United States, even those from the most significantly impacted countries. How then can those seeking to provide assistance in those countries be transported?

Should there be better screening at airports to protect citizens from the Ebola virus? Yes. Should every possible precaution including vigorous education campaigns by health care officials be implemented?

Absolutely. In addition to throwing every possible deterrent toward eliminating the Ebola virus, precautions should be taken not to create mass hysteria leading to unreasonable determinations by authorities.

As a result of the Obama Administration, the United States is taking steps not only to send personnel and resources, but to coordinate the international response to the Ebola virus in Liberia, Sierra Leone and Guinea, among other countries. Only positive, consistent and coordinated action by the international community will defeat Ebola, not immobilizing people by engendering widespread fear, thus making a serious threat even worse.

– This story is special to the Daily Vox, courtesy of AllAfrica.com, with featured imageÂ by Boakai Fofana/AllAfrica.com