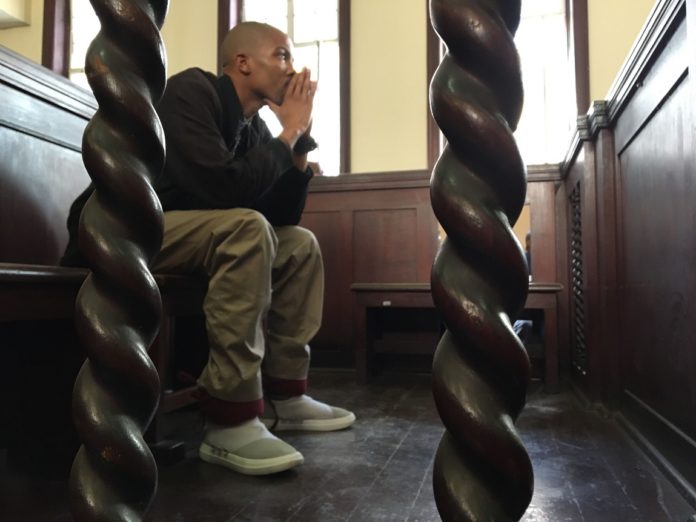 “Why is the state hell-bent on keeping Cekeshe in jail,” asked Advocate Tembeka Ngcukaitobi. It was a packed court at the Johannesburg Magistrate’s Court for Kanya Cekeshe’s bail hearing. Cekeshe, a Fees Must Fall Activist (FMF) has been in prison for the past 22 months. On October 10, the court heard a bail application for Cekeshe. The magistrate reserved judgement until October 14.

Update: On Monday 14 October, the Johannesburg Magistrate’s Court denied Kanya Cekeshe’s application for leave to appeal his sentence, and also denied him bail. (Editor’s note: This is a developing story. More to follow.)

Outside of the court, the mood was jubilant. Around 100 members of the Economic Freedom Fighters Student Command (EFFSC) had gathered to support Cekeshe. Inside the courthouse, Cekeshe’s family and friends filled the room. EFF national spokesperson, Mbuyiseni Ndlozi, EFF MP Vuyani Pambo, and fallist Busisiwe Seabe were also in court to support Cekeshe.

Why is Cekeshe is in jail

In 2018, Kanaya Cekeshe got an eight-year sentence in prison with three years suspended. Cekeshe was jailed for public violence and arson related to the 2016 FMF protests. During the protests, Cekeshe was reportedly caught on camera bending down next to a police car trying to light a match.

At the time, Cekeshe was a student at Footprint Media Academy. However, he joined students at the University of Witwatersrand (Wits) out of solidarity.

Immediately after his arrest, Cekeshe spent six days in Sun City prison. He was later released on R5000 bail. However, in December 2017, the judge at the Johannesburg Magistrate’s Court sentenced him to five years at the Leeuwkop Prison. He has been in prison ever since his sentencing.

During the October 9th proceedings, Ngcukaitobi said he would be asking the court to rule on the bail hearing, as well as a leave to appeal on the case. He mentioned that he had found a number of flaws in the state’s case.

Ngcukaitobi said there was a discrepancy between what Cekeshe admitted and what the state submitted on the charge sheet.

Steyl has power of attorney by Cekeshe to represent him. Ngcukaitobi questioned the lack of video evidence in Cekeshe’s case. The state identified the video as the most important piece of evidence.

The magistrate announced he was informed on the morning of the hearing during the ending portion of Ngcukaitobi’s judgement. He also said he had not received any of the relevant documents necessary for the case.

The flaws within the criminal justice system seemed to be a huge theme of the day. There were all the glaring areas that Ngcukaitobi raised during his arguments. This includes the state not producing the video evidence in court.

Then there was the fact that Ngcukaitobi said Cekeshe was charged with violations on the charge sheet which he did not admit to. Then there was the charge being unaware of the case and its content. The state, the judge, and the defense said parts of the transcriptions were missing from the original case.

After lunch, the state had its chance to oppose the bail application. Speaking to The Daily Vox, EFFSC president Mandla Shikwambane said they were surprised the state opposed bail as they were initially told the state wouldn’t be.

State prosecutor David Mothibi said the state is opposing bail because they believe justice has been served. “The applicant doesn’t have leave to appeal and should remain in custody,” said Mothibi.

Considering that the judge said he was not aware of the specifics of the case, he said he would hear the case. However, he reserved judgment for another day. The defense pressed the judge to set the date for the judgement which Judge Carstens decided to set for October 14.

Earlier this year, Cekeshe petitioned the high court to appeal his conviction and sentence. The Fees Must Fall (FMF) activist said his former lawyer was “wholly unprepared and inexperienced”. During his petition, Cekeshe admitted to dousing a police vehicle with paraffin and then setting it alight. He said the vehicle was destroyed but no one was injured.

However, Cekeshe argued that he believes he was incorrectly advised to plead guilty. He said he was not explained his rights such as the “state had a duty to prove its case beyond a reasonable doubt.”

“The first mistake I can see is Kanya was not advised on the consequences of pleading guilty. I don’t mean to badmouth my colleague. I do not know him, but the legal representative, even from the court documents, admitted in court that criminal practice only constitutes 20% of his practice,” said Steyl.

During the October 1, court appearance an agreement was reached that the National Prosecuting Authority (NPA) would accompany Cekeshe’s legal representatives to court to secure a date for the hearing of the application for bail pending the appeal.

Other fallists with sentences

Writing in the Mail & Guardian, Bonginkosi Khanyile said: “Cekeshe must be set free. The state shouldn’t even oppose bail instead, it should expunge his criminal record and withdraw the case.”

Khanyile is an FMF activist found guilty on charges of public violence, and possession of a dangerous weapon. In January this year, he was sentenced to three years house arrest under correctional services supervision by the Durban Magistrate’s Court.

Along with Mcebo Dlamini, Khanyile has been calling on the president to institute a presidential pardon for all Fees Must Fall activists who have criminal records from that period. Speaking in parliament, the justice minister said a blanket pardon was not possible, and that those affected would need to submit a list of people asking for the pardon.

Before the hearing proceedings kicked off Ngcukaitobi submitted an application on behalf of the media. The media asked to broadcast the hearings. Ngcukaitobi said the case was not just important for Cekeshe for the entire country. “Public interest outweighs any inconvenience to the administrative proceedings,” said Ngcukaitobi.

Leaving the court when the judge announced the date for judgement, Cekeshe looked remarkably more somber than when he arrived. The toll of the past few months was evident on his face, and those of his loved ones gathered in the room.

“We have today somebody who is in prison who should have never been in prison. It lies on the worship that he does not remain in prison any longer,” said Ngcukaitobi showing just the seriousness of the October 14th judgement.