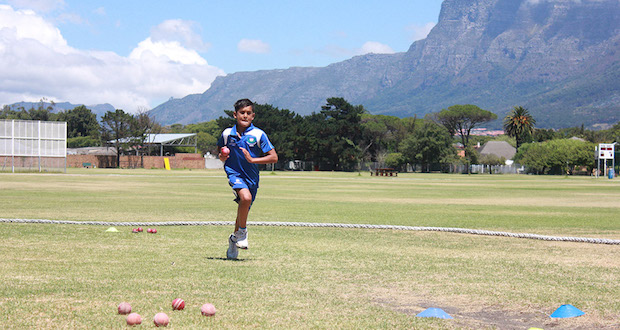 A heartwarming video of a 12-year-old boy meeting his cricket heroes has already been watched more than 230,000 times on YouTube. RAâ€™EESA PATHER met the little man who made South Africans feel #allthefeels.

â€œI didnâ€™t want to go inside â€“ I was just in shock,â€ he laughs. â€œItâ€™s probably the best feeling Iâ€™ve ever felt.â€

Kieron lights up as he talks about Amla. South Africaâ€™s star batsman has clocked up 6,757 runs in just 82 matches. But itâ€™s not Amlaâ€™s run rate that has left an impression on the young admirer.

â€œI wrote about how he will always put his family above his life,â€ Kieron says, â€œHeâ€™s so humble and down to earth.â€

â€œWatching the team helps me to think that I must stay humble, keep my feet on the ground, and just enjoy the game and not put so much pressure on myself,â€ Kieron says.

The Proteas are currently in New Zealand and Australia for the cricket World Cup. On Sunday, the team will play India, who Kieron believes are one of the strongest contenders in this yearâ€™s tournament. But the youngster animatedly says that South Africa can take the Cup, as long as our bowling improves.

â€œWeâ€™re bowling short and weâ€™re getting hit to the boundary,â€ Kieron says. â€œWhen thereâ€™s a good death bowler bowling bad on that day, we should change it up a little bit. The person whoâ€™s bowling good that day, could bowl [at the] death too, to tighten the game up.â€

On a Sunday morning in Cape Town, Kieron is trying to improve his own bowling. His face falls as the wind disrupts his delivery. But he tries again, as his parents watch on, encouragingly.

â€œTheyâ€™re always at my cricket games. My parents are actually the base of all of this,â€ Kieron says. â€œThey let me be a child instead of making me try to be an adult. Thereâ€™s boundaries, but they let me be myself.â€

Kieron is at the top of his class in academics and plays for his primary schoolâ€™s under-13A cricket team. His bowling is stronger than his batting, but he hopes to improve in high school next year.

His meeting with the Proteas has gone viral on YouTube, drawing a wave of public attention. But Kieron has kept his cool.

â€œItâ€™s just like when I play cricket, I donâ€™t change anything to impress somebody,â€ Kieron says.

A cricket and rugby fan, he hopes to play for the Cape Cobras or the Stormers before becoming a sports physiotherapist.

â€œI love rugby just as much as cricket, but I canâ€™t decide which one I will choose for the future. Itâ€™s too early,â€ Kieron says.