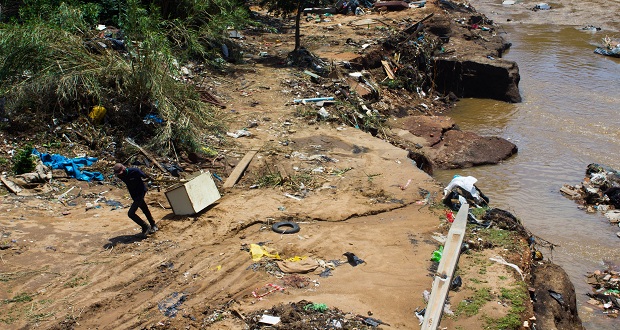 A long row of mobile toilets separates the East Bank cemetery from Setswetla informal settlement where scores have been left homeless by Johannesburgâ€™s recent flash floods. The rainâ€™s trail of destruction is visible along the banks of the brown Jukskei River. Wrecked shacks and broken branches jut of the eroded embankment and, even a week after the fatal storm, debris still floats in the polluted Jukskei. In sympathy with those whoâ€™d lost loved ones and their homes, President Jacob Zuma, flanked by security and city public officials, waded through the destruction for an afternoon visit on Tuesday.

He saw the site where, for at least three hours, people sat in trees to waiting for the high waters to subside. One branch couldnâ€™t hold and a man was swept away. In another tree, Shadrack Chauke lost his three-year-old daughterâ€™s grip and she fell.

Until today, little Eve Chaukeâ€™s body is yet to be found.

From the footage, the president seemed sincere in his promise to improve Setswetlaâ€™s housing conditions. He vowed thereâ€™d be action; the homeless would be (temporarily) housed and the most flood-prone moved from riverbank to a better location. Zuma sounded great, but itâ€™s not the first time Setswetlaâ€™s shacks have been washed away by floods.

In 2008 and 2013, homes were destroyed by heavy storms and then, as now, the government promised to act. However, efforts to move people elsewhere have been painstakingly slow. Last year, after a long wait, the council allocated 800 homes made from corrugated iron sheets to sections of Setswetla, but residents complained the one-roomed houses made from flimsy material wouldnâ€™t be able to withstand a turbulent storm. Stronger housing units made from prefabricated materials were given to 70 households affected by floods in 2014 by Gift of the Givers.

Despite their tragic loss, the Chaukes, a migrant family from south-eastern Zimbabwe, are fortunate to have a temporary home here, but the view from the NGOâ€™s housing village is an appalling landscape of shacks. Itâ€™s maddening to think that more than 20 years since apartheidâ€™s end, people still live in such deplorable conditions. Established in the late 1980s, Setswetsla was built on a landfill in an area that has a 1% chance of flooding each year, but settlements continue to sprout on the riverbanks. Whatever the authorities have tried to do to prevent people from building unsafe shelters in risky areas, it doesnâ€™t seem to be enough.

Season after season, the rains risk wreaking havoc on the Jukskei, and even the president admits this. But after the death of at least six people from poor flooded areas around Gauteng, the stateâ€™s slow pace of housing projects in the province risks sending a very chilling message: that the lives of the poorest South Africans and migrants donâ€™t matter, that they are a blind spot in the regimeâ€™s eye, easily forgotten until the next tragedy strikes.