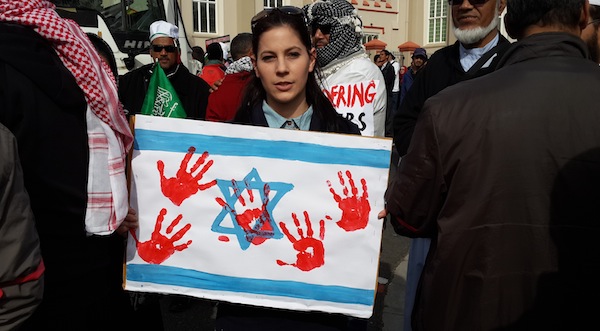 I wasnâ€™t always a pro-Palestinian Muslim. Seven years ago I was a Star of David-wearing Zionist Jew.

I lived in the Jewish stronghold of Sea Point and eagerly disposed of my spare change by contributing to the blue tin that an elderly lady would shake all day in front of Checkers. She said I was doing my bit to plant trees in Israel. That felt good. Iâ€™d visited Israel and loved the country.

I close my eyes and I can still feel Israel. I hear the Mizrachi music in the sherut heading towards Jerusalem from the airport, I feel the energy and sense of belonging at the Wailing Wall, and I feel the overwhelming family love on the Kibutz in the Hula ValleyÂ where I spent a June holiday in 1999 picking bananas. Mostly I can still feel the admiration I had for the young soldiers that I used to see on the busses in Tel Aviv.

At the time, I was oblivious to the living conditions of people in nearby Gaza. But anyone with a real understanding of the daily threat that Gazans live under and an understanding of the way the IDF treats civilians on the other side of the separation wall would surely be waving a Palestinian flag like I do today.

I became Muslim in 2007. Not long after, I found myself standing in a Spar in Kenilworth, inhaling freshly fried samosas with a handful of newly purchased books on Islam. Â An elderly woman approached me carrying a pile of books, scarf wrapped tightly around her face. My white face and awkwardly pinned scarf must have screamed â€œrecently convertedâ€.

â€œSalaam, here are some books on the Israeli occupation. They are killing the Muslims, you know.â€

I nodded and smiled and walked away feeling uncomfortable and angry.

I had not been Muslim for long and came from a Jewish and Zionist upbringing. I had no interest in mixing my religion and my political views. I loved Israel as my homeland; I believed in everything it stood for.

Not long after the incident, I covered a Palestinian rally for the radio station I was working for at the time. The crowd, as always, was predominantly Muslim. But I also saw many non-Muslim activists standing against Israel. It was the first time I started to see Palestine not just as a Muslim issue but as a human rights issue. After meeting Palestinians and hearing their stories, I knew I had to start paying closer attention and I reluctantly began to research the conflict.

What I found was uncomfortable to say the least and it took a long time to overcome the indoctrination of imperialism and colonialism, and of unequivocal entitlement to the promised land, that I had been raised to believe in.

These are some of the statements I only sought to interrogate later on in life.

â€œWhen Palestinian mothers love their children more than they hate us, there will be peace.â€

This was said to me by an Israeli woman who, like many, thinks Hamas and the entire Palestinian population use children as human shields, and that Israel does not target civilians.

Gaza is recognised asÂ one of the most densely populated pieces of land on earth. According to theÂ BBC itÂ is home to 1.7 million people who are imprisoned in an enclave 40km long and 10km wide. It goes without saying that soÂ many people confined toÂ such a small space would findÂ very fewÂ safe spaces to hide from an attack.

â€œThere has never ever been a country called Palestine. On the other hand, it is Israel who is offering the chance of a Palestinian state side by side with Israel, but radical Muslims keep ruining that possibility.â€

Since the late sixties, over 500,000 Israeli citizens have settled and occupied Palestinian land. Â According to the United Nations Security Council Resolution 446 this is illegal. Furthermore Israel continues to enforce a full military blockade on Gaza, leaving Palestinians are trapped inside an open-air prison, with nowhere to take refuge. Â According to the Population Reference Bureau,Â  Â 50% of the Gaza population is under the age of 15 and most of the population live below the poverty line. SoÂ when Israel attacks Gaza, it is attacking an impoverished, child population.

â€œIsrael has a right to defend itself.â€

Every country has this right. The Geneva Conventions governs military conflict however and these laws include the concept of proportionality. The Palestinian people have no army or tanks and their defence system is based on homemade devices. The mainstream media portrays this conflict as a face-off between equal military powers.

In the past few days, Israel has killed more than 200 Palestinians, mostly women and children, and injured hundreds of people. Entire families have been obliteratedÂ andÂ little children have been killed while they played. On Tuesday night we heard of the first Israeli being killed.

â€œIsrael is not an apartheid state.â€

This analogy has been used by United Nations investigators and human rights groups, some of which have also accused Israel of committing the crime of apartheid. With a system of control including Jewish-only settlements, the ID system, separate roads for Israeli and Palestinian citizens, military checkpoints, discriminatory marriage law, the West Bank barrier, use of Palestinians as cheap labour, Palestinian West Bank enclaves, and inequities in infrastructure, legal rights, and access to land and resources between Palestinians and Israeli residents in the Israeli-occupied territories, Israel today has many similarities to South Africa during the apartheid regime.

Over time Iâ€™ve come to believe that my people, my persecuted people, some of them holocaust survivors themselves, are complicit in an increasingly racist regime.

I challenge you to look at this issue, not from a religious or nationalist point of view, but rather as a human rights issue.

*Editor’s note:Â This piece was influenced by a note posted on Facebook by Sayed Dhansay. It has been amended to more accurately reflect its sources. You can read Dhansay’s note here. Jess Mouneimne is a media strategist, presenter,Â blogger and general seller of words. In 2013 she launched Fight the Fight, an NGO taking a stand against child rape in South Africa. She is also on the managing committee for the ‘Enough is Enough’ campaign which is demanding harsher sentencing for rapists.