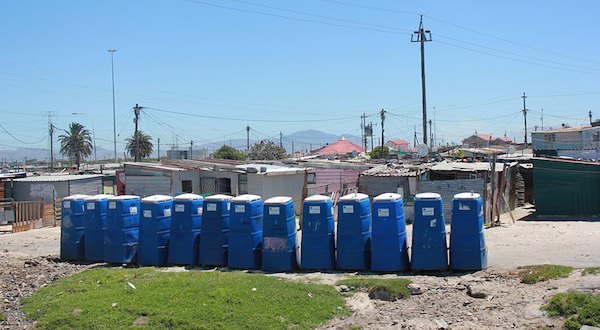 Khayelitshaâ€™s dirty toilets and Cape Town’s “poo wars” have become almost as famous as the mountain that overlooks the touristy city. But even though every human has a right to sanitation and dignity, shack-dwellers still relieve themselves on the side of N2 highway. Khayelitsha’s toilets tell a very different story to the travel brochures.

Informal settlements around Khayelitsha have sprung up on wetlands over the years, making it difficult to establish infrastructure and lay the pipes required for proper sanitation. Even so, the general feeling among residents is that the City of Cape Town could be doing a better job.

A social audit, conducted by civil activist organisation the Social Justice Coalition (SJC), found that one in four flush toilets in Khayelitsha was not working. Every flush toilet is used by at least five households, so if one of them is out of commission, many people lack access to a basic amenity.

And that’s just the flush toilets.

Chemical toilets â€“ known as mshengu toilets â€“ and portable toilets are still widely used in the township. Earlier this year, the South African Human Rights Commission found that the City of Cape Town had discriminated against black African people and violated human rights in distributing these temporary services as a permanent sanitation solution.

Portable toilets, commonly known as porta portas, are sometimes used because access to flush toilets is limited, or the mshengu toilets are in poor condition. In 2013, riots broke out in Khayelitsha when residents received a notice from local government telling them the City would be providing more portable flush toilets. The City defended itself, saying people had a choice to use the service. But residents disagreed.

â€œWe do not want the porta-potty toilets. If the City of Cape Town thinks they are good and private then they must use it and build us proper toilets,â€ community leader Nokuthula Boqwane said.

The toilets in Khayelitsha stand in plain sight. While more flush toilets and ablution services are slowly being made available, Khayelitshaâ€™s residents still find themselves walking through the dirty water that leaks from existing public toilets. “Mshengu is not right at all. The biggest problem is like now, itâ€™s too smelly. When you go inside itâ€™s too hot … We donâ€™t feel safe because of the smell and also because of the chemicals. Some people are allergic to the chemicals. I get a rash, especially when itâ€™s hot, so I donâ€™t like it,â€ says 23-year-old Zine Bikitsa, who lives in RR Section. â€œItâ€™s dangerous for women. Letâ€™s say itâ€™s night and then thereâ€™s some skollie outside, then if you go inside, the skollie will come and he can rape you outside. So the women are not safe at all. I go to the toilet at night, and Iâ€™m too scared. Just to think that something will happen in my head, it makes me scared,â€ Bikitsa says. â€œItâ€™s better to give us flush toilets, because the flush toilets are the better ones than mshengu,â€ says Bikitsa. “There are not enough flush toilets for all of us, there are more now, but not enough. Itâ€™s a big improvement to have flush toilets because we used to use the portable toilets, and more people used to relieve themselves over the road next to the N2 which is even more dangerous,” says Ntuthuzelo Vika, a resident at RR Section and volunteer with the SJC. The taps at Khayelitsha’s public toilets provide water for hand washing and for residents’ other household needs. In some areas of the township, the water comes out slowly, making it difficult for residents to collect the water they need. â€œIâ€™ve been using the flush toilets for one year, and the porta porta for four years. Porta porta is dirty and it smells,â€ says 31-year-old mother of two, Nompiliso Molose, as she does her laundry. â€œIâ€™m happy with the toilets, because weâ€™re not using porta porta, these are flush. I donâ€™t feel right that some people in Cape Town have toilets and we in Khayelitsha donâ€™t,â€ Molose says. Portable toilets are usually located in an outhouse next to the home. Ablution blocks are scattered around the township. Security guards are employed to protect the toilets from vandalism and crime. The blocks have lights, but are locked at night, leaving residents to find alternative facilities. â€œI have no problem sharing, because normally weâ€™re used to sharing. Thatâ€™s what itâ€™s like to stay in an informal settlement – you share toilets up until you get your house and then you use your own toilets. The sanitation is getting better. Last time there was more mshengu, but now itâ€™s becoming better because there’s more flush toilets,â€ said Fundiswa Moyake, a security worker at the RR Section ablution block. The City is being pressured to draw up a sanitation plan to solve the problems residents in Khayelitsha face. Civic organisations say they have tried to engage with local government, but little communication has been shared.

â€œThe people who use the toilets are the ones who can come up with the solutions,â€ Vika says.