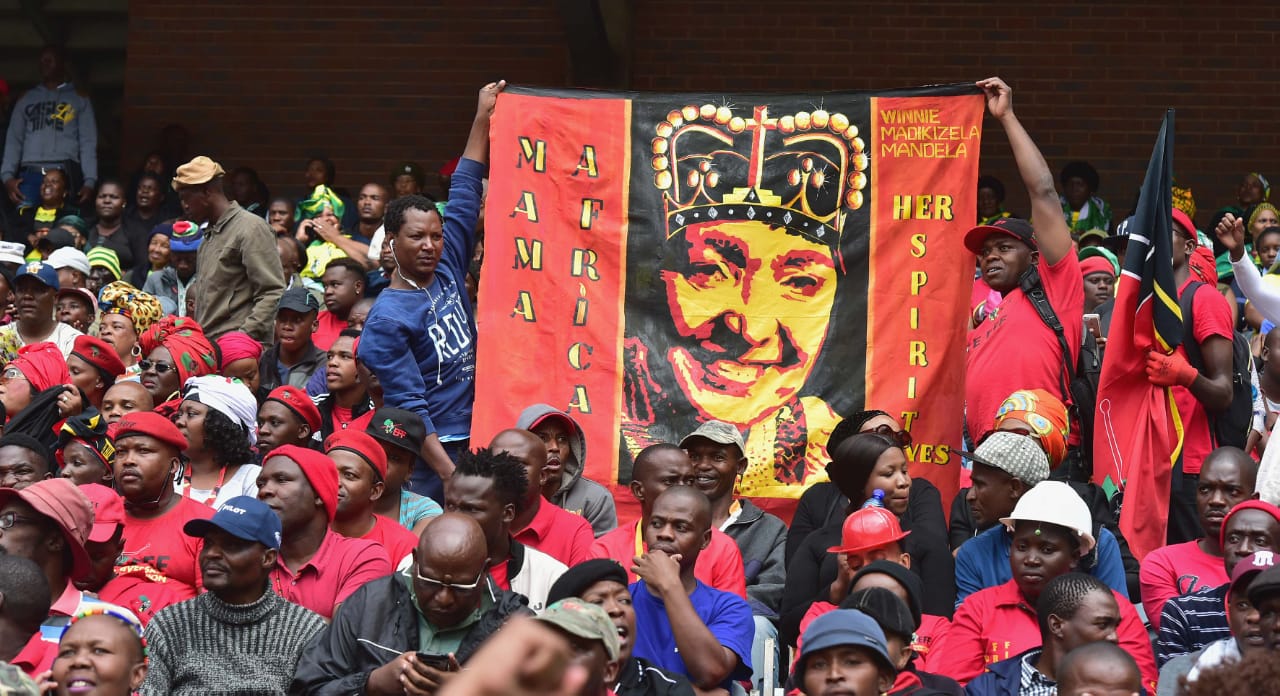 UPDATE: Mam’ Winnie’s daughters delivered moving tributes. The eldest Zenani Mandela said that her mother’s humanity had touched her family and the entire world. The family noted the outpouring of grief at the news of the death. She also strongly criticised elements of the press and the apartheid police, who had conspired to smear her name, and drive a wedge between her, the African National Congress, and her husband at the time, Nelson Mandela.

UPDATE: Supermodel and close friend of Mam’ Winnie, Naomi Campbell pays her tribute to the family and honours her life. “She taught us not to be limited in our thoughts. She gave us the courage to dig deep and strive for freedom,” she said.

UPDATE: President Cyril Ramaphosa gives his eulogy. He spoke about how Mam’ Winnie was left alone with her wounds while she touched and healed the wounds of others. “She not only touched our wounds, she bandaged our wounds. but we did not do the same for her,” he said. As the president of the ANC, Ramaphosa said he will propose to his executives that Mam’ Winnie be bestowed the highest honour a member of the congress can receive. “I’m sorry your organisation delayed in according you your honour. As president of the ANC, I will be proposing the executive bestows on you its highest honour – the Isitwalandwe / Seaparankoe.”

Zenani named the former South African Police commissioner George Fivaz for waiting until Mam’ Winnie had passed on to tell the truth about what the apartheid government had done to her, especially the anti-struggle Security Branch and the Strategic Communications operation (Stratcom).

“Those who vilified my mother don’t think for a minute we have forgotten. Praising her now that she is gone shows what hypocrites you are,” she said.

Speaking straight after Mam’ Winnie’s children, the leader of the Economic Freedom Fighters Julius Malema continued on a similar theme, criticising the ANC and society for failing to properly recognise and love her for her enormous contribution to the struggle against apartheid.

“In this fight you were persecuted by apartheid regime and disowned by your own. She died a perfect death, she never sold out,” Malema said.

In his speech, he also called out the political organisations that sided with the apartheid regime in disassociating themselves from her. He asked for a sign from Mam’ Winnie on what to do about the UDF. “Buya ma, come back and leave again after you have given us a signal,” he said.

Malema also called for Cape Town International Airport to be renamed after her.

Politics were never far from the proceedings of the day, which was highlighted by Malema’s refusal to acknowledge the presence of the former president Jacob Zuma, in spite of acknowledging a wide range of political leaders present, and promising that the large throng of EFF supporters in the crowd would behave themselves.

Mam’ Winnie is to be buried at the Fourways Memorial Park, in the same place where her late great-granddaughter Zenani Mandela.

On Wednesday both the ruling African National Congress and the Economic Freedom Fighters held separate memorial services to commemorate the stalwart.

Watch the live stream of the funeral here.