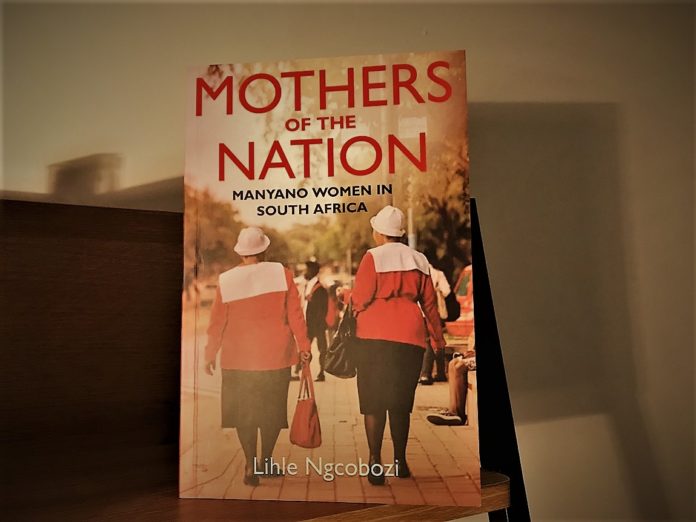 “I have been surrounded by the Manyano all my life. From my earliest memories of childhood, I always knew that being a Manyano woman was a rite of passage that all Ngcobozi women went through…”

Lihle Ngcobozi, lecturer and academic begins her book: Mothers of the Nation: Manyano Women in South Africa with a question. The question was why being a Manyano woman was such an important part of her family’s history and more so for the women.

Her book, which took two years to research and write, looks at the Manyano women and their role in South Africa’s religious and political history. Her Master’s thesis on the topic was converted into the book – placing the voices of Manyano women at the centre. Ngcobozi interviewed around twenty women to write the book.

But who are the Manyano women?

Instantly recognisable with their red, white and black outfits, the Manyano women are one of the most prolific African women’s organisations. They form part of the Methodist Church of Southern Africa, came about in 1907 and are still operating in 2020. In an academic paper written in 2002, Fannie Mkhwanazi notes that “From 1907 up to this date Manyano fought for recognition in the church and for an end to oppression of women.”

Inspiration for the book

“I was born in Durban and I was raised by my gran who is still part of the Methodist Women’s Manyano,” said Ngcobozi. She was always surrounded by the church and the women. It was only later though when she was working on her Masters that Ngcobozi decided to dig a little deeper in the Manyano women. She focused on two main themes: how the Manyano women navigate their position within the church and what they mean more broadly in a political sense through their involvement with the liberation movement.

Ngcobozi’s work is a feminist text. Through the book she attempts to understand how the Manyano women used their matriarchal power and position within the church to navigate space. She says there’s limits to Western feminist lens around motherhood and religious spaces. “It was really an exploration of the political ways black women make use of the church,” said Ngcobozi.

She centers the women’s voices in the book and uses a feminist theoretical lens to interept what they’re saying.

“We give the church life and we are the ones who make it work,” one of the women interviewed in the book says. From the public sphere to motherhood, rituals of death and more the women speak on all the issues. Then Ngcobozi uses theory to explain where these ideas fit in the political discourse.

She wanted to make sure she didn’t speak for the women. Instead, Ngcobzi said she hoped to achieve a more collaborative intellectual project.

Ngcobozi said much of the existing scholarly work on Manyano women is based on colonial narratives. She said the research shows black women’s training in Victorian ideals of womanhood and domesticity. What she sought to do with her book is to go beyond those ideas. Ngcobozi said she looked at how the women changed into the iteration of the Manyano women we find nowadays. “They made use of the church, motherhood and women’s networks to ensure they infused it with ethics of liberation, anti-apartheid politics and redemption,” said Ngcobozi. A big theme from the book is how the Manyano present new understandings of motherhood.

Ngcobozi hopes people realise the importance of the Manyano for black women. She said she wanted to showcase a dynamic group of women who often don’t get the recognition they deserve. The book is an attempt to show how Manyano women contribute to post-apartheid feminisms. It’s not about the fact that this group of women exist but it’s to show that they contribute a huge amount to intellectual thought and black liberation.

“I wanted to make sure they are seen as an institution of knowledge and not just as women who go to church […] presenting something deeper than that.”