Home Sexual Violence Marching against rape and violence: ‘If they donâ€™t heed this message, then...
WhatsApp
Facebook
Twitter
Email
Print 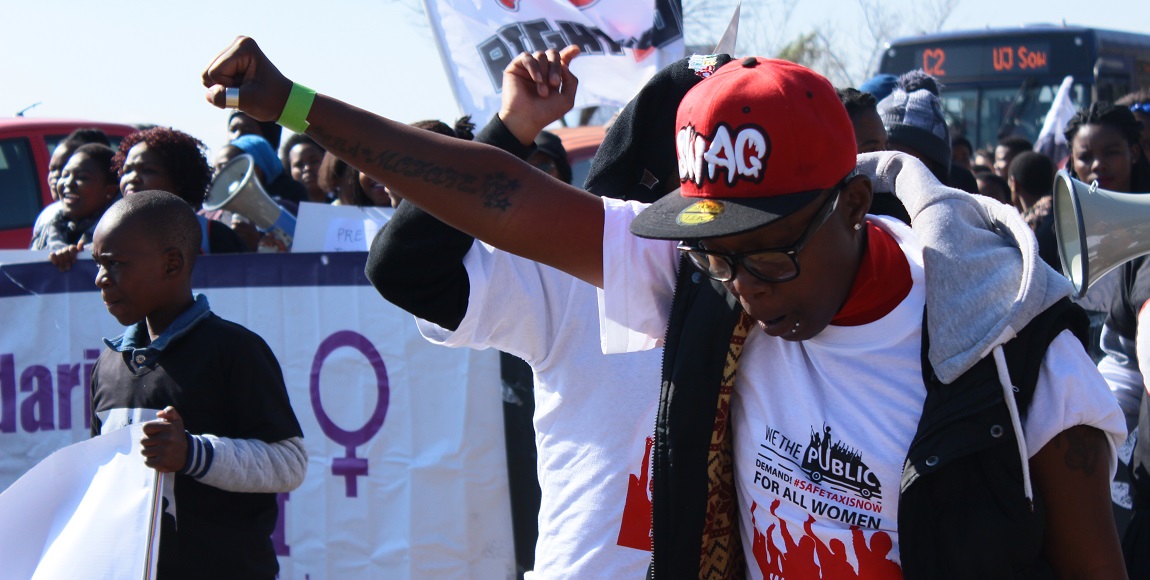 Trigger warning: this article contains an account of rape

This weekend, at the final #SafeTaxisNow event in the month-long campaign, women, LGBTQIA+ folk, men, and children gathered outside Bara Taxi Rank to voice their frustration about and tell the country enough is enough. The Daily Vox spoke to some of the women at the taxi rank to find out why they were marching and why they think men are a danger to womenâ€™s bodies. Mgladzo Nikelo, 33, gender activist, KwaThema
Weâ€™ve been marching since we were born. Whether I stay sitting down nothing is going to happen so itâ€™s a must that I should be here. But Iâ€™m hoping thereâ€™s change where men can at least be sympathetic. They use their masculinity and power over us and use it to kill us. Itâ€™s not that we canâ€™t reciprocate it. We are women of the 21st century; we can own guns. But because we like peace we want it to be peaceful. So this is our last message to men asking them to stop killing us. If they donâ€™t heed this message, then weâ€™ll retaliate. Weâ€™ll start a war because I think thatâ€™s the language theyâ€™ll understand.

I donâ€™t doubt that each and every single woman that uses a taxi has been harassed by a male that drives a taxi. Itâ€™s either the taxi driver or the person sitting next to them. Iâ€™m a lesbian so I get sworn at a lot. They call me inkonkoniÂ [a derogatory term for a lesbian]. Itâ€™s not that I canâ€™t reply to them but I know that if I do talk back they could just kick me out of the taxi before I reach my destination. He has that power. Iâ€™m always sworn at because I like women.â€ Sizakele Phasha, 30, unemployed, Diepkloof
Men are a problem for women. I was a social person that loved dating but since the rape, Iâ€™m even too afraid to greet a man. If a man greets me I start to shake because I think of what happened to me.To me a man now is the same as an animal. I chose to go back to the father of my child who I had been separated with for nine years. I thought he could love me because we have a child together and heâ€™s never raped me.

It happened in a car parked along the road. So these guys were [identical] twins. One guy stopped the car and the other one raped me. It came out that I had identified the other twin as the rapist. On the last day of the trial I saw him. They got him and he was sentenced to 25 years at Newcastle.

Men donâ€™t think about us, they have no sympathy for us. They donâ€™t care if you live with them or have a child with them. He sleeps with both the child and the mother. Men are trash. Those people need to be arrested. What would change all of this is if youâ€™ve raped, or abused a child, you must be sent to jail no matter what. They must get that sentence that discourages them from ever thinking about doing it again. Weâ€™re tired and weâ€™re fed up. Manku Noruka, 43, Soweto Womenâ€™s Forum youth programme coordinator, Soweto
Men are making themselves dangerous [towards women]. They donâ€™t need to be because they are also human beings. If a man does not see a fellow woman as an equal partner, who has got the right to exist as he is, then he becomes a threat. As women, we will not stand back. We will take back our power and say enough is enough and we will fight back.

We need a shutdown [now] more than ever. That thing [woman abuse] has started from top office and itâ€™s filtering right down. If women can stand up together and not just view it as a situation of other women, and not wait until something happens to you, it can definitely happen.