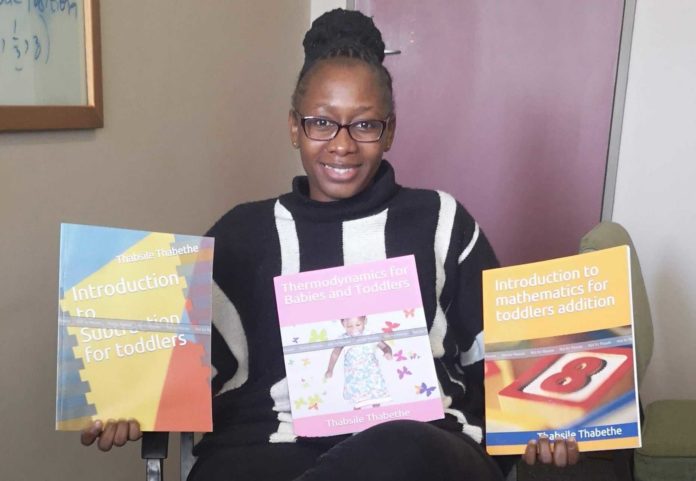 A 30-year-old physicist and post-doctorate research fellow at the University of Pretoria, Thabsile Thabethe, recently published mathematics and physics books for toddlers, aimed at introducing and familiarising them to these subjects from a tender age. Thabethe says her books are inspired by her two-year- old daughter whom she usually do math with. She shared her writing journey with the Daily Vox.

I am a physicist by profession and a mother of a two-year old daughter. My writing started as drafts with my daughter and I would put it in a file, and when I showed it to my friends they suggested I share it with the rest of the world.

It all started with my daughter because everytime when we did something together I see that she grasps and enjoys it. Kids are quite smart, if you show them something now they might come back to you in the future and show you how it’s done differently and better than you; and also ask you questions that you’ve never thought about.

One of the other things that made me want to publish these books is the attitude that most people have towards mathematics and physics. They often say these are hard subjects and they can’t do them but once you say something is hard, it often becomes hard because you already believe that. So if people are being exposed to these two at a young age like my daughter, the attitude of the hardships that come with them would also become minimal. It would also become easier to teachers because they would have to focus on other things knowing that the foundation has  been laid with the basics, than spending so much time focusing on the basics.

I was also once one of the people who perceived math to be hard. My uncle, who was very good at it taught me how to do it, that’s how I ended up in my field.

With the publishing I didn’t approach anyone, I decided to take the self publishing route to see how people receive my work. Currently all the books are available only on Amazon. The books are not available locally yet but we are in the process of printing copies that will be used for promotion and will be available hopefully  around September this year.