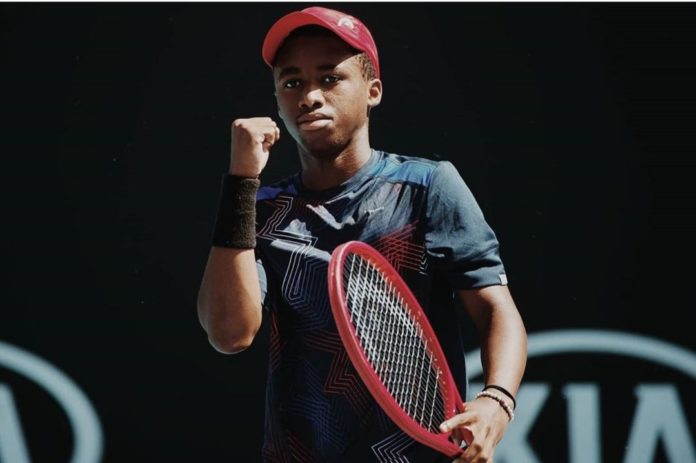 It’s less than a week after his return from the French Junior Open. And even over the Zoom call, it’s clear to see that Kholo Montsi still looks tired from the trip. He says that he is recovering from a flu and is tired – understandably so. The 17-year-old played his final match in Paris on October 7.

Montsi says going to Paris for the tournament was not the dream experience he thought he would have. Even before leaving, there was so much happening off the court. He had to get a Covid-19 test before leaving. Montsi initially had a false positive test meaning he had to get tested twice. After testing negative for the virus, during the flight there were issues with the paperwork. Montsi said the problems started from the beginning and it made the whole process difficult. Added to that he only traveled to Paris with his fitness trainer and without any family.

But Montsi was grateful for at least one familiar face. He said his trainer helped keep his mind on track throughout the tournament. On arrival in Paris, he had to quarantine for a full day. Self-isolation and quarantine can be very difficult. But for a young sportsperson eager to train and play, it was even more so. Montsi said the food provided was nothing to write home about and playing on your phone can only take up so much of your time.

“So I think there were many things off the court that just made the experience much tougher,” said Montsi. However, it was those experiences that gave him a greater desire to do his best on the court. Being at the tournament made him feel it was where he belonged.

But Montsi’s journey didn’t just start with his recent trip to Paris. It started years ago when he stepped on the court aged seven holding a tennis racket for the first time. A big sports fan growing, Montsi had no idea that tennis would be the sport he would ultimately take up. Bryan Habana was his first sporting icon and Montsi loved playing rugby more than anything. Along with his brother Siphosothando and their parents, the family participated in many sports from tennis, rugby, athletics and cricket.

However, there came a time when in East London they needed a black player for the team. Montsi said a parent from their school suggested his brother for the tennis team. After his brother had many successes and started travelling around the country, Montsi didn’t want to be left behind. He was about to leave for a karate championship tournament but his brother was leaving for Malaysia. Montsi dropped karate and instead headed for Malaysia to watch his brother play tennis. If he hadn’t left for Malaysia and subsequently taken up tennis, Montsi said he would definitely be playing rugby right now.

“I picked up the racket and started playing and never wanted to stop,” he said. While his brother remains a huge inspiration, for Montsi there was a moment when he knew tennis was his sport.

It was when he won his first International Tennis Federation (ITF) tournament in 2018 in Potchefstroom. During that win, he told himself that if he won one tournament what was stopping him from winning many more tournaments. It was the support of his family, team and especially his brother that gave Montsi the belief in himself.

“I started to dream – too big – but I think if the dream is not too big it’s not worth it,” siad Montsi.

Initially it was the dream of fame and glamour which attracted Montsi to sports. He wanted the fancy cars and houses which he saw sportspeople had. However, as he grew Montsi realised sports isn’t everything. He plans to go to university to study law or business, if tennis doesn’t work out. But he does want to be successful with tennis so that he can help himself, his family and his community.

While Montsi was knocked out of the French Open Junior, he was happy with his performance. Given that many things that happened off the court weren’t in his control, Montsi said he had to adapt. Just having the opportunity to play at Roland Garros is something that he counts as a blessing.

It’s what has inspired his future goals. Montsi wants to be the world’s best athlete and the world number one in tennis. For the time being he wants to be ranked 500 on the ATP circuit by December 2021. Montsi is not just interested in growing his career. He wants to grow tennis in South Africa and Africa, especially in black communities.

Something that Montsi has noticed at tournaments is there are lots of players from the European countries. He is the only South African along with Eliakim Coulibaly, his doubles partner as the only player from Ivory Coast. He believes that with support, there are many players from South Africa and Africa who can play in these tournaments. He hopes that the federations can invest more into the sport.

As the news of Montsi’s participation in the tournament reached South Africa, there was an outpouring of support. He said by the time he got to Paris, it felt like he had already won the tournament. “I felt happy knowing that I have that many people backing me. Even after my loss I got tons of support,” he said. As there weren’t many supporters in the stadium, the virtual support helped him during his matches.

“I always want to represent my country, my continent, my race and culture. Being a young kid and having all of this support – I used it as motivation. I’m super grateful for every person that sent me a message,” he said.

Even at such a young age, Montsi has travelled around the world and played in different venues. But it’s a venue closer to home which he counts amongst his favourite places to play. Montsi said Zimbabwe and Mozambique are his favourite places as he feels at home. Japan is also a favourite especially for the interesting food he tried there. And South Africa remains close to his heart.

Montsi’s passion and dedication for the sport is clear to see. And if you happen to see Montsi before he is due to court, make sure not to disturb him. He will probably be found with his earphones in, listening to some music. That’s the moment when he doesn’t want to be disturbed as he gets in the headspace for the match. And on his playlist you can find a little bit of Lil Baby, Lil TJ, Sam Smith, Lewis Capaldi, Justin Bieber and Ed Sheeran. As he says he likes to mix things for his playlist.

Lastly, with all he has achieved, Montsi is just grateful for all support he has received, especially his family. Montsi believes the key to success is to stay close to your family and have a good team around you.

“I think for those who want to be successful in whatever they do in their life, I think just believe in yourself,” he said.