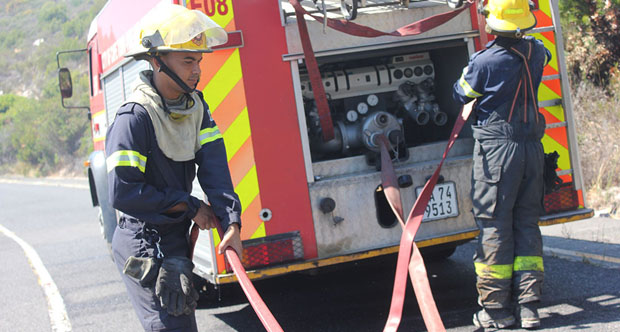 The blaze that is raging in Cape Townâ€™s mountains has brought firefighters, helicopters and rescue workers out in droves. But itâ€™s not just the officials who are working tirelessly to control the inferno. Volunteers from affected communities have joined the relief effort, while many people fear being evacuated. By RAâ€™EESA PATHER. â€œThese guys [firefighters] are absolute flipping angels. Iâ€™m telling you, theyâ€™ve been out here the whole night. It wasnâ€™t too serious Sunday morning but at around 10pm, this whole section near Boyes Drive was in flames. At about 5am, it was almost on the edge of the mountain, and thatâ€™s when I got up and hosed the garden to keep everything wet so any sparks that fly across donâ€™t start any problems. Fortunately, we didnâ€™t have to evacuate. My wife packed the dogâ€™s food in first, my daughter was worried about her hamster, and you need things like your ID book. Nowadays, photos arenâ€™t a problem because you can just take your computer hard-drive. But weâ€™re not too worried, we get a bit complacent about these things on Boyes Drive. My wife and I just packed a few sandwiches and water for the firefighters.â€ â€“ Kevin du Preez, 62, Lakeside â€œLast night [Sunday] on our way home from Blouberg, we were driving and we could just see the orange mountain in the distance. Then, as we got closer I realised that it was actually our mountain that was on fire. Right away, we went to our balcony to make sure the fire wasnâ€™t too close. As the night went on, it did creep closer and closer to our house â€“ it was about less than a kilometre away. I had my bags packed; I had my passport, my Kindle, a change of clothes, and my wallet. From my bedroom window, I could see the mountain on fire, so I was scared. I didnâ€™t sleep at all last night. I kept having nightmares that we would be evacuated, but thankfully we werenâ€™t.â€ â€“ Brooke Neilson, 28, in Lakeside on holiday from Canada Community security ready to help
â€œThere are residents here who are concerned that the fire will jump over across Boyes Drive. It happened in 2006, but I think now theyâ€™ll have it under control to prevent it from jumping over. Residents now are okay, but they have to keep an eye on the wind and see where it takes the fire. If the fire does come over, weâ€™ll obviously contact the fire department and offer some assistance, and tackle the fire in anyway we can. Last time they provided some of the community with these rags that were tied to something similar like a broomstick to beat the fire out, but thatâ€™s what we can do to help.â€ â€“ Wain Carew, 37, security-company owner, Lakeside Co-ordinating the volunteer effort
â€œThe flames at 2am were probably about 30m high. At that point the fire really did pose an imminent danger to residents. I made sure my family was safe, woke up a few neighbours to let them know what was going on, and came down here and worked out a strategy to help the officials.

â€œAlready firefighters, disaster management, and the neighbourhood watch guys were on the scene. We used social media, namely our Facebook page, which is the Noordhoek Community Forum, to spread the word and let people know they can volunteer or bring donations here. Since then, weâ€™ve had more than 100 volunteers. People have been actively fighting the fires, and also working behind the scenes. If you go into the kitchen there are people making sandwiches, in the next room thereâ€™s a distribution centre where boxes are being packed for volunteers and official firefighters, and thereâ€™s a first-aid area where the volunteer fire fighters can get treatment for injuries and a saline solution for the smoke in their eyes.â€ â€“ Athos Rushevich, 50, sales manager, co-ordinating volunteer effort at Dutch Reformed Hall, Noordhoek Volunteering to fight the blaze
â€œYou feel adrenaline in the moment, but youâ€™re focused on what you have to do, so you donâ€™t really think about it. You see your neighbours, you see their houses are in trouble, and itâ€™s the community spirit that motivates me.

â€œThis morning [Monday] we were using spades, and a few wet blankets to fight the fire… The wind keeps changing direction, so you have that smoke burning in your eyes. When the smoke blows back on you, thatâ€™s the worst thing, because of the visibility. My one eye is still bad because of the smoke.

â€œI donâ€™t envy the job of these firefighters. They have been working the whole night; they are machines. While we were out there this morning, we were battling a little area and one of the helicopters came overhead and dumped litres of water onto us. Your skin is beginning to burn in the heat, and you get this cold bucket of waterâ€¦ It was stunning.â€ â€“ Ivan Duffield, 54, manages interior design company, volunteer firefighter at Dutch Reformed Hall, Noordhoek

-Â Voxes have been edited for brevity and clarity.
– All images: By Raâ€™eesa Pather.Â