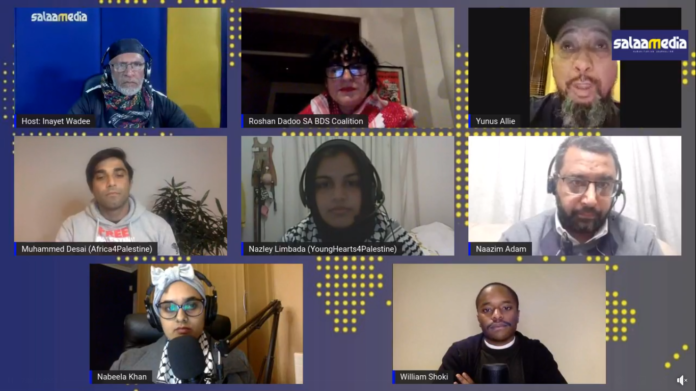 On Wednesday, community radio station Salaamedia hosted a panel discussion titled “Maintaining the momentum in the solidarity struggle for a free #Palestine”. Featured on the discussion were several activists and figures from the South African Palestinian solidarity movement. The discussion was hosted by Salaamedia presenter, Inayet Wadee.

The guests on the discussion included Roshan Dadoo, William Shoki, Yunus Allie, Naazim Adam, and Muhammed Desai, among others. The over two-hour long discussion went into the various issues facing the struggle and how to continue fighting for a free Palestine.

However, what has caused a social media outcry happened during comments made by Dadoo and Shoki. During Dadoo’s opening comments, she mentioned that the organisation she represents, the SA BDS Coalition, came about at the request of the BDS National Committee.

Dadoo said the BDS National Committee informed the coalition that they were disaffiliating the former BDS-SA. “They said it was because they failed to reach mediation […] around allegations of sexual harassment that were made around the then-director Muhammed Desai. In their opinion, they had failed to conclude this matter satisfactorily and they requested a number of organisations to form a coalition.” In response to Dadoo’s opening statements, Allie said there shouldn’t be any slanderous remarks made.

In March 2019, The Daily Vox revealed that an American academic who had been in South Africa for a study tour had raised allegations of sexual harassment against Desai. Then BDS-SA, now Africa for Palestine, launched an independent investigation into Desai and found him not guilty. In March 2020, the coalition was formed with BDS-SA rebranding as Africa for Palestine.

Later in the Salaamedia discussion, Shoki spoke on the importance of intersectionality in the Palestinian solidarity movement. Shoki said it was important to condemn all forms of oppression. “I just want to mention that there is a fierce conversation happening in the comments about what happens when a figure in our solidarity movement is credibly accused of sexual harassment. How do we respond?”

Wadee interrupted Shoki, saying that he had also seen the comments but that the discussion was about where the solidarity movement was at strategically.

He mentioned that movements like Fees Must Fall and Rhodes Must Fall came underdone when it relegated questions of how women are treated in the movement and how toxic masculinity dominates. Wadee once more interrupted Shoki at this point to say the question being asked was around the impact of student movements can have on intellectuals.

Many social media users have expressed their dissatisfaction with the manner in which the interview was handled.

The Wits PSC, of which Shoki is a member, said they condemn the radio station’s attempts pf “trying to silence” Shoki “when he tried to address the issues of sexual violence within the Palestinian movement.”

Salaamedia told The Daily Vox they have been running an academic series on Palestine for the past three weeks. “We are proud to be a platform that provides equal access to women and men without discrimination. Regarding the latest development which was brought to our attention via social media by the Wits PSC, who were invited to our panel, I can confirm that we have reached out to initiate contact with them. We will be more than happy to chat once we have additional developments.”