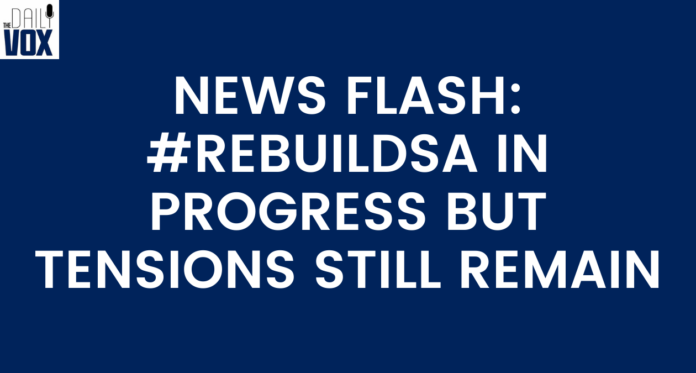 Even as parts of KwaZulu Natal (KZN) and Gauteng start to rebuild and open up, racial tensions continue in KZN. Many have also been left without access to essentials.

On Friday, president Cyril Ramaphosa, visited KZN where there were some reports of looting and arson reported from Thursday night. Ramaphosa was accompanied by KZN premier Sihle Zikalala, police minister Bheki Cele, state security minister Ayanda Dlodlo, and defence minister Nosiviwe Mapisa-Nqakula. The government officials were there to assess the impact of the recent violence. While addressing the media, Ramaphosa said he was wrong to label the violence “ethnic mobilisation”. During addresses on Sunday and Monday, Ramaphosa said what was taking place in KZN and Gauteng was as a result of ethnic mobilisation. On Friday, he said the looting and destruction were planned by people but the plan failed.

He was due to head to Phoenix from Durban but instead rushed back to Gauteng for a cabinet meeting.

The death toll from the violence and destruction of the past week has risen quite high. It is now at over 117 people. Over 20 people have died in Phoenix in the last few days. Many people’s bodies have been recovered from malls as law enforcement agencies have secured the spaces and cleanup has started. Phoenix has been identified as a hotspot with both criminal and racial tensions in the area. In KZN, 91 people have died and over 1500 people have been arrested since last week Friday.

On Friday, the Western Cape Disaster Management Centre was informed that the SANDF will be deploying soldiers in the province. Alan Winde, the premier of the Western Cape said, “I welcome this proactive step, which we believe is necessary given the unrest seen in some parts of the country.”

On July 13, Shell & BP South Africa Petroleum Refineries (SAPREF) declared force majeure. This is a common clause in contracts which essentially frees both parties from liability or obligation when an extraordinary event or circumstance is beyond the control of the parties. SAPREF will be shutting down due to the civil unrest in the country and disruption of supply routes in and out of Kwazulu-Natal.

In a statement issued on behalf of SAPREF, the refinery said that without these critical materials and with no clarity as to how long the unrest would continue and when normal supply could resume, SAPREF said it was unable to sustain refinery operations.

The Engen refinery in Durban and the Chevron refinery are currently out of commission, leaving Natref, a joint venture operated by Sasol and Total, the only major source of refined fuel in the country.

On Friday, the N2 and the N3 were reopened. These national roads are vital transport routes for food, medicine, fuel, and other supplies  – as well as the ports of Richards Bay and Durban. The routes were closed for almost a week since the unrest began last week Thursday. Motorists were urged to be cautious while using the roads and to expect traffic delays. Thania Dhoogra is the operations manager at the N3 Toll Concession said: “Law enforcement agencies are deployed on the N3 toll route, and will be maintaining a highly visible presence.”

Many communities in the affected areas have come together to assist with cleaning up malls and other businesses that were destroyed. People from other parts of the country have also set up donation drives to assist those affected.

The PayTheGrants campaign has put together a useful working document about where to go for help and how to donate to those in need.

The List: Help for businesses and communities affected by unrest