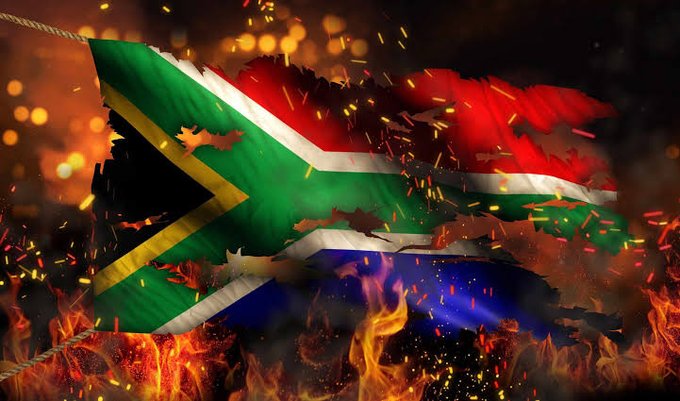 The cost of damages from the #ShutdownSA unrest has been estimated to run into the billions, for the retail sector alone. The rand weakened by 2% to R14.50 to the dollar on July 12, the most since February 2021.There is also the unquantifiable costs to the “township” economies of South Africa, and a certain rise in unemployment. The Daily Vox takes a closer look at the economic impact of the unrest.

Read more: #SAShutdown triggered by #ZumaArrest but not the reason

Many small, medium-sized and micro enterprises (SMME)  South Africa businesses are not insured. In a survey done by the Small Business Institute (SBI) in 2020, as many as 55,000 SMMEs would not survive the COVID-19 pandemic. Being uninsured has worsened recovering from the damages caused by the protest action.

The protests and looting in KwaZulu-Natal (KZN) destroyed and disrupted vital transport, logistics, warehouse and distribution facilities in the province. Fears have been raised of a food shortage happening in the coming days and weeks. Critical transport networks are unable to function disrupting supply chains that are essential including food and fuel. The Durban port has been closed, which is critical for import and export. The South African Special Risk Insurance Association (SASRIA estimated the damage caused at more than R30 billion.

The Road Freight Association (RFA) has said at least 33 trucks were set alight along Mooi River in KZN. This will impact small businesses linked to the freight industry, who may have to close. Damages including the road infrastructure could run into the millions.

The South African Property Owners Association (SAPOA) said on July 13, eight hundred stores were looted and around 100 malls were burned or damaged. SAPOA  estimates eThekwini’s GDP alone stands at R20 billion in overall losses – this includes more than 50 000 informal traders. The Gauteng premier David Makhura said the exact economic impact on Gauteng’s economy has not yet been identified.

Read more: The List: Help for businesses and communities affected by unrest

The SA Milk Processors’ Organisation (Sampro) said the violence and looting of the past few days has forced dairy farmers to dump their supplies of milk. Looters invaded some farms and stole equipment and livestock, and destroyed infrastructure. Sampro says unprocessed milk has to leave the farms as it has a limited shelf life, resulting in farmers dumping their milk supply. Deliveries cannot be received as the facilities were either damaged or destroyed. The supply chain system has been severely affected.

The already embattered alcohol industry said more than 200 liquor shops have been looted in KZN and Gauteng.

Lucky Ntimane, who is with the National Liquor Traders council, says hundreds of taverns were targeted during the protest action. He says even if the alcohol ban was lifted, tavern owners have no stock to trade with. The tavern sector in the township economy is vital to the livelihood of many people.

The South African Informal Traders Alliance (SAITA) says the consequences of the protest action are dire. SAITA said hundreds of traders who trade within the precincts of shopping centres were targeted, have lost their income. SAITA president Rosheda Muller says the government must make good on the promise of monetary aid to informal sector workers Muller said the government should also increase the amount to R1000 per person monthly during the duration of the lockdown.

Balabala said in a survey they did with informal traders they discovered 80% 6000-plus township and rural entrepreneurs said they didn’t have business insurance, worsening their current situation. “As an organisation our programmes don’t have actual support. Yet as an unfunded organisation we were able to reach out to 50 000 township and rural entrepreneurs,”Balabala said.

“Government must take an active role in resuscitating, rebuilding and the restructuring of small businesses. It is a great opportunity to remodel the township economy inclusively. Private companies should join in rebuilding township businesses across the country. Working with organisations that are on the ground all over the country is the best way forward,” Balabala said.

The SBI says the protest action threatens to worsen unemployment, poverty, hunger and inequality, as well as the food security of millions of South Africans. The economic impact intersects with the social where various charity organisations were looted-cutting off the food supply to thousands of people.  The Durban Chamber of Commerce said on July 13, ongoing protest action may lead to a shortage of food and other supplies.

“This disruptive activity is damaging to the economic infrastructure, the threat on food security should be taken very seriously. Producers of essential foods have now decided to temporarily shut down,” its deputy president Gladwin Malishe told the African News Agency (ANA).

As the unrest dies down and clean-up operations begin,  the Congress of South African Trade Unions (Cosatu) tabled a proposal for a disaster relief fund package. The proposed fund will provide relief for workers and communities, funding of township and rural economy, and the broadening of the social welfare transfers. Cosatu said there is also a need to discuss the basic income grant.

Read more: Why an income guarantee would create a South Africa where everyone can thrive

“There is an urgent need to finalise the discussions around the introduction of the basic income grant to help bring some relief to the millions of unemployed South Africans,” Cosatu said.

Cosatu said the relief fund must be all encompassing to include food vouchers, insurance relief, Unemployment Insurance Fund’s Covid-19 TERS relief and the reinstatement of the R350 Covid-19 Grant for all unemployed persons across the country.

Cosatu says, “This moment calls for a change of mindset and an acknowledgement of the fact that the current unemployment and poverty levels are not sustainable.”