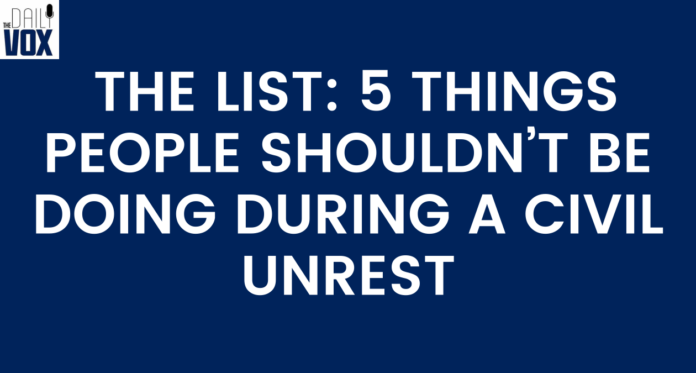 As the civil unrest and looting unfolded across KwaZulu-Natal and Gauteng we’ve seen tensions starting amongst the public. Here’s 5 things people shouldn’t be doing to worsen these difficult times.

Fake news is intentionally false and designed to manipulate people’s perceptions of reality. It is used to influence politics and to promote advertising. Fake news has also become a method to stir up and intensify social conflict. Stories that are untrue and that intentionally mislead people have caused growing mistrust amongst the public. In some cases this results in civil unrest, hate crimes or violence.

During these times it’s important to get reliable information from reputable sources to understand what’s happening. The more you know about the current situation, the more effective steps you can take to help minimise the risk of spreading fake news. Before sharing something on social media or your family groups, make sure to check and verify first. It will save a lot of anxiety if you make sure you are sharing correct information. The president has even repeatedly asked people to check before sharing any information and news.

Cyberbullying is repeated behaviour, aimed at scaring, angering or shaming those who are targeted. Spreading lies, posting embarrassing photos, sending hurtful messages or threats and impersonating someone and sending mean messages to others on their behalf with the use of digital technologies fuels the fire and promotes fake news, hate crimes and violence.

Taking the law into your own hands

When a person or group of people take the law into their own hands, in an attempt to serve justice, it’s called vigilantism. The consequences of taking the law into their own hands can lead to injuries or even death to a person that is being suspected of committing an offence. Charges for vigilantism differ because of the nature of injuries sustained by the accused. Cases of grievous bodily harm, attempted murder and in the case of murder itself can be opened.

A citizen’s arrest, as described by Section 42 of the Criminal Procedure Act of 1977, allows citizens to arrest someone for certain crimes. A citizen can arrest someone, inform the police, then hand the person over to the police as soon as possible. Under Schedule 1, citizens can make arrests for murder, rape, robbery, assault with a dangerous weapon and burglary. While people obviously want to protect their homes and families, there has to be better ways to do that than breaking the law.

Police Minister Bheki Cele confirmed that 15 people were killed in Phoenix, north Durban, this week following racial tensions sparked by public violence and the looting of shopping centres and outlets in KwaZulu-Natal.

An open, honest dialogue must take place for communities to rebuild and move forward. The government also needs to be doing more to stop these tensions, instead of further encouraging them.

Social scientist Doctor Rama Naidu says underlying differences between groups of people stem from post-apartheid political issues that have never been resolved in the province.

South Africans, young and old alike, need to educate themselves about the history of KwaZulu-Natal and the history of Indians in South Africa. The 1949 Durban riots, which saw clashes between Indians and Zulus, should not be forgotten. The ‘us’ and ‘them’ syndrome must be eliminated.

With the masses, many people are not following the public health guidelines: wearing masks, social distancing, using hand sanitiser, and getting tested for COVID-19.

The riots and looting have led to the closing down of several COVID-19 vaccination sites in KwaZulu-Natal and Gauteng. Pharmacies, some of which were also vaccination sites, have also been looted and Cipla, a major manufacturer of generic medicine, had its factory in Durban burnt down. The biggest loss however is not the vaccines, but the chronic medicines that were looted, leaving many patients with HIV, hypertension, cancer and diabetes without their medication which make them more likely to fall severely ill with coronavirus ending up in hospital.

Dr. Akhtar Hussain from the SA Medical Association (SAMA) says police and military interventions have come too late.The impact of the ongoing unrest in Kwazulu-Natal and Gauteng has affected essential medical services badly.

Hussain said public healthcare workers are unable to travel to work in KZN because of fuel shortages, and current public violence. Private practices have been looted, and many clinics have had their medication and critical medical supplies stolen. Food and staff shortages are affecting hospitals, while emergency admissions are increasing.

Stockpiling is never a good idea. Even when the country went into hard lockdown, people were encouraged not to stockpile essentials. Well it’s now more important than ever especially if you are living in KZN and Gauteng. Buying copious amounts of essential goods just because you have the resources is extremely selfish during this time. If you have the resources, rather buy the goods and share it with those who aren’t able to access these essentials. But don’t clear the shelves at the shop just to stock your own pantry!