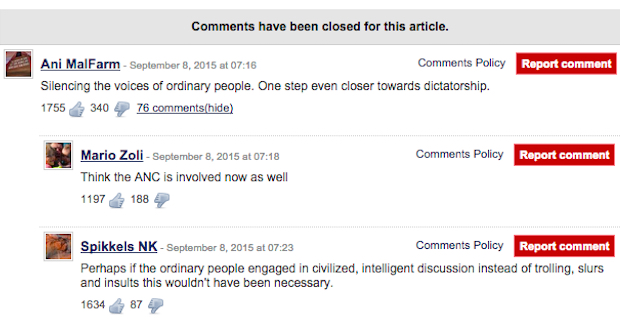 On Tuesday, News24, one of South Africaâ€™s primary online news destinations, announced that it would be disabling its comments sections, and South Africans had a lot to say about it. AAISHA DADI PATEL rounds up.

In a statement, News24 editor-in-chief Andrew Trench explained the companyâ€™s decision saying it had come following â€œfollows months of internal debate and discussionâ€.

â€œThe end result of these debates is that we have decided that we wish to be known for the quality of our content rather than for our comments,â€ he said.

Itâ€™s true that over the years News24 has developed the reputation of being a place where you actually do not want to read the comments, lest you open yourself up to a tsunami of hate and vitriol. Unless youâ€™re bored, and looking for something to laugh at, then of course, thatâ€™s exactly where you go.

Haha what will people do with their tea breaks now? RT @MyNews24: Farewell to comments: Why we are making a change http://t.co/FnPteRDQI6

When the news came out on Tuesday morning, many were ecstatic.

Thank you @news24! Your decision to switch off #news24comments on articles has ended digital Apartheid

Racists when they hear that News24 is shutting down comments. pic.twitter.com/hSK8wy7WUW â€” Khaya Dlanga (@khayadlanga) September 8, 2015

In the good spirit of things, comedian Deep Fried Man even added his two cents to it all

My very own @News24 comment in reaction to them closing the comments section. pic.twitter.com/xbSY46GTMB

But some people were highly displeased, and claimed the comments were being closed because of censorship, an ANC conspiracy or â€œthe Dingaan regimeâ€. (Ya, we donâ€™t know what theyâ€™re talking about either.)

The comments under the article saying that #news24comments are closing are *amazing*. pic.twitter.com/dhiVzzcnd6

Trolls having one last emotional romp on the @News24 article about closing the comments section. LOL @ Keith! pic.twitter.com/recJbIHQoV

But seriously though, could this be an attempt by Naspers â€“ Media24â€™s parent company â€“ to further redress its role in supporting apartheid?Â  All is not lost for those whoâ€™ll miss it the most â€“ as this tweep pointed out, the comments section in the Afrikaans version of the site is still very much active

Hahaha the Afrikaans News24 has not switched off its comments, i knew there was a loophole pic.twitter.com/RD8jL7EK5M â€” Impi isesendeni (@fistvoices) September 8, 2015

What do you make of it all? Let us know in our very much open and available comments section.

– Featured image: screenshot from comments on Andrew Trench’s statement regarding the end of comments on News24