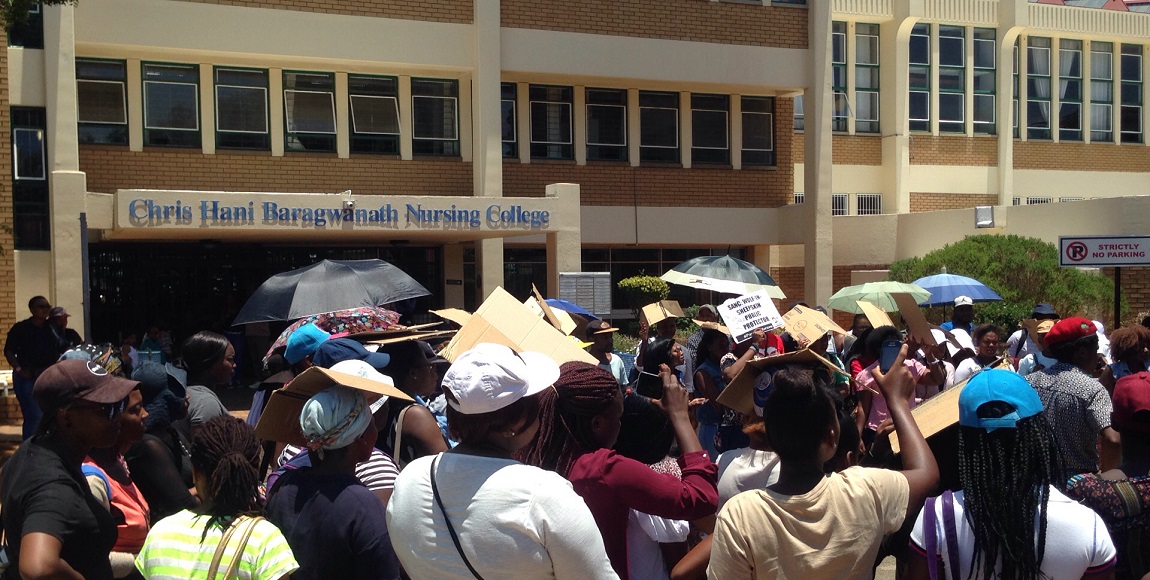 Most of the students who gathered outside the Chris Hani Baragwanath Nursing College on Monday had applied for the four-year nursing diploma. They had been called to the college for testing, which included psychometric testing and medical surveillance. After completing the testing, many did not receive any communication at all from the college or department about the nature of their application. They then heard rumours that the department did not have any bursary funds. The students decided to gather outside the three Gauteng nursing colleges to demand answers from the academic institutions and the provincial health department.

Another group, who were also outside Chris Hani Baragwanath were students who had seen advertisements in the newspaper and social media, telling them that registration would be open at the college. However, when they got to the campus, they were told that those messages were a scam and registration had not been open.

On Thursday last week, a Sowetan report revealed that around 700 students in Gauteng who had applied to nursing colleges were being left without a place for the upcoming year. This is in spite the students qualifying for a place at the colleges. The main institutions who are being affected is Chris Hani Baragwanath, Ann Latsky and SG Lourens.

A spokesperson for the provincial department of health said that it is unable to fund the first year students for the four-year nursing diploma because they cannot afford the R57 million required. The department would still be funding second, third and fourth year students. The spokesman Lesemang Matuka told The Sowetan that the colleges would only be able to admit first-year students with external bursaries or those who can afford to pay the fees themselves.

The MEC for health Gwen Ramokgopa discussed the matter of the nursing colleges while addressing members of the media on Monday. She said the department have confirmed that they have gone through the tests and are qualified to be appointed, and that her department is looking to postpone the start of the academic year for the first years.

â€œIt is important to share with the public that our attrition rate – the number of nurses that feed our healthcare services in Gauteng – is about 1000 every year so thereâ€™s no way that we will not take the first year students. We will take them. It is just a matter of making sure that by the time we take them there are finances to make sure that we are able to pay their bursaries, their accommodation, and also assist them with their training materials,â€ she said.

One of the students who was waiting for the department to address said to The Daily Vox that she has received an SMS to come and submit the necessary documents for application and later received another telling her to come and write the psychometric test, for an interview and for the medical surveillance.

â€œAround the 18th of December, we got an SMS telling us to pick us up our approval letters. And then on Thursday (last week) they sent another SMS not to come because there was a new development and when we called them, they told us the process is busy on hold and we have to wait until further notice,â€ Tintswalo said.

Many of the students said this course was their last hope while others had gave up other opportunities for the nursing one.

The Democratic Nursing Organisation of South Africa (Denosa) says that it is not a funding problem and the main problem was with the minister of health Aaron Motsoaledi who issued a directive that there should be no intake of first year students.

The Denosa acting provincial secretary Bongane Qankase said in an interview with The Daily Vox: â€œIt was a directive from the minister. There is a budget to fund the intake for this year. During the ANC national conference the department issued a directive that there shouldnâ€™t be a intake of first students without giving a reason. We understand there are task teams that have made representations to the government but the word of the minister is final. So basically the problem is the minister not the colleges.â€

A spokesperson for the department of health Foster Mohale said that he was unaware of any such instructive to stop the intake of first years into the colleges.

Qankase said that Denosa has proposed that the department should look for companies and NGOs who would be able to fund programmes of nurses. â€œBecause without this intake the consequences are going to be dire especially on the patient. We are here for the patient, not for the government,â€ he said.

Lerato Madumo Gova from the Young Nurses Indaba Trade Union said to The Daily Vox that the members of this union at the colleges informed them about the situation.

â€œThe current students and academic staff became alarmed and notified the union to say this is what is going to happen and the ripple effect will be not just on the students that are not yet here but will actually directly impact on the academic programme but most importantly it impacts on the community that we serve,â€ she said.

The union said it has been trying to get a meeting with Ramokgopa, accusing her of issuing a directive to colleges that there would be no more bursaries.

â€œThe department needs to recall this decision, which was not even done in a proper manner. We would also like those students who have went through the testing to start this yearâ€¦ For many students this was their last hope and they are not going to take this lying down,â€ Gova said.

One of the students who had seen the message about registration being open today said: â€œI received it on Whatsapp. Then when we got here, we saw them standing here saying they were not taking any more people. They know nothing about this.â€

Another student said her mother found out from a nurse who confirmed that there was registration. Yet that was not what she found when she arrived at the college.

Jack Bloom, a Democratic Alliance member of provincial legislature released a statement, calling for the department to reconsider the cancellation of training for first-year nurses, â€œwhich is a priority that should not be sacrificed because of poor budgeting.â€

The Economic Freedom Fighters Studentsâ€™ Command has also called for an explanation from the Gauteng department of health.