Home Talking Back No, Fox News, you are welcome in Mayfair. Just get your facts...
WhatsApp
Facebook
Twitter
Email
Print 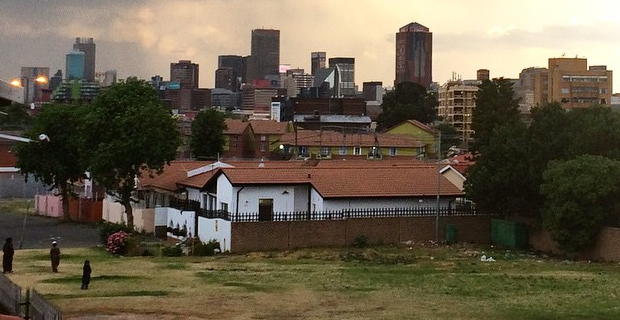 Fox News recently claimed that portions of Johannesburg are under the sole control of Muslim extremists. The suburbs of Mayfair and Fordsburg, the reporter Paul Tilsley claims, are “well known for spawning terrorists”. But Daily Vox executive editor KHADIJA PATEL says these claims are dangerous fabrications that show how poor journalism is being used to further the reporter’s own agenda.

Several claims underpinning a Fox News report that asserts South Africa has become a key source for ISIS of not only money, but also jihadist fighters who typically hail from a small area of Johannesburg” are false at worst and severely distorted at best. Here’s a breakdown of how Fox got its facts wrong:

1. “While ISIS recruits come from throughout the country, most are radicalized and lured from two downtown districts of Johannesburg, Mayfair and Fordsburg.”

In May, Azad Essa and I conducted an investigation for Al Jazeera, in which we found that at least 23 South Africans had travelled through Turkey to join the Islamic State. In the course of our investigation, we found that several of these people travelled to the ISIL-held territory from Cape Town, Port Elizabeth, Durban, and small towns near Johannesburg, while others hailed from Johannesburg itself. Meanwhile, Independent Newspapers’ Yazeed Kamaldien last week reported that the town of Roshnee in Vereeniging is actually central to ISIL recruitment in South Africa.

The claim that most South Africans joining ISIL are lured from Fordsburg and Mayfair is patently false.

On Twitter last Saturday, when I pointed out to Tilsley that his assertion that non-Muslims are not welcome here is not accurate, he countered with another claim that South Africans who had recently returned from ISIL-held territory were all from Mayfair and Fordsburg.

As I pointed out to Tilsley, the story of the ISIL returnees was broken by us on Al Jazeera and the majority of them were from Roshnee and even Durban.

@khadijapatel speak to Iraqi Ambassador and ISS they disagree, but I’ll take your word. And Samantha Lewthwaite and the training she got?

3. “Those who respond to ISIS’ call leave through Johannesburg’s main international airport, where just weeks ago, five men were nabbed with $6-million and believed headed for the Islamic State.”

In the course of our first investigation, we found that 11 South Africans had been deported from Turkey en route to ISIL-held territory in Syria. We spoke to an official in the Turkish foreign ministry who said the Turkish government remained concerned about foreigners transiting through Turkey to enter ISIL-held territory, but they were not particularly concerned with ISIL recruits from South Africa. “We are, after all, dealing with thousands of fighters from some 90 countries,” the Turkish foreign ministry official said. As for the money confiscated at the airport, Fox News is the only agency pushing this ISIL link to the cash confiscated at the airport. If Tilsley actually did some investigative work that does not already exist, he would find that this cash is well known to be the fruits of creative tax evasion practices, or as it’s known in these parts, ooplang, and hawala money in transit. Tilsley would be amazed to learn what he would find if he actually bothered to speak to people here. “Non-Muslims are not welcome in the downtown area known for spawning terrorists.” Firstly, there are actually a number of churches and temples in the area. None of them have been pushed out by the marauding army of Muslim extremists.

And then I must ask, who are these terrorists that Mayfair has spawned? Tilsley, after conceding to me on Twitter, keeps coming back to the so-called White Widow, Samantha Lewthwaite.

Lewthwaite was not born here. She arrived here from the UK, after already having some links to terror groups. The exact nature of her associations here is still not known. The only thing that is known for sure is that she lived here for some years, and acquired a South African passport during her time in the country. Everything else remains speculation.

Tilsley, however, claims Lewthwaite received training here in Mayfair. I don’t know what his sources are here, but if it is De Wet Potgieter’s book “Black Widow White Widow” then a reviewer’s summation of the book as “contrived and muddled” may inspire him to source his facts elsewhere.

The portrayal of an entire community as some kind of terror incubator based on the fact that one woman lived here some years ago, shows that he has long drawn conclusions about this part of Johannesburg, and is merely looking to further those.

4. “A Fox News crew that recently tried to film near a Mayfair mosque was threatened and chased from the area. The ominous encounter raised for the first time the specter of ‘no-go zones’ or areas where Muslim extremists have sole control of the streets.”

The claim of “no-go zones”, or “areas where Muslim extremists have sole control of the streets” in Mayfair is spurious, misleading and wholly inaccurate. It is a claim based on the reporter’s single encounter outside an unnamed mosque in the area.

And yet, as a visibly Muslim woman, I have also had trouble filming in the area.

Last year, reporter Ihsaan Haffejee and I were shooting video for a small film I was to present at Duke University when we were accosted by a group of Mayfair residents who objected to being filmed. We had been shooting for hours when suddenly, on the corner of Bird Street and 8th Avenue we were accosted by a very angry man demanding, “Why are you taking pictures of my house?”

The man pushed against Ihsaan, shouted at him and insisted that he had been filming his home.

Ihsaan had actually been filming a flock of pigeons among the filth on the corner before we were stopped. Yet this man, angrily insisted that we were taking pictures of his home.

After some minutes of seemingly inane argument, I eventually asked the man where his home was.

He pointed to the street corner.

There was little to mark the space as anyone’s home, never mind a place fit for human occupation. There was rubbish strewn among puddles of water. There was nothing in that corner that indicated it belonged to anyone, that someone belonged to that place. It was free of stuff, free of even the basic things that we commonly associate with life on the street.

Within minutes, we were surrounded by a group of Somali men from the area who were angry that the last round of pictures I’d taken disenfranchised women in the eyes of other men here.

We were well within our rights to film the street, in all its glory of human and aviary life. But so too were the people in the street free to question, and object to what we were doing.

I am currently writing a book about Mayfair. In the course of mining the memories of people and documenting their stories, I have had to learn to negotiate the suspicions, reservations and reluctance of people to become spectacles in themselves. I have had to learn that much as I want to tell the stories of this place and the people who live here, people too are entitled to push back against my storytelling. I have had to remember as well, that not everyone takes so well to having a camera or microphone pushed into their faces.

And indeed for many adherents of Islam in this area, photography is considered haram, or forbidden. Moreover, the sanctity of a mosque is considered by some to be breached by cameras. Tilsley could have contacted the administrators of the mosque, or other religious leaders in the area for better access to the mosque. But Tilsley insists that his difficulties filming outside a mosque in Mayfair points to non-Muslims being unwelcome here.

Lest we forget, this is not the first time Fox News has claimed vast swathes of a foreign land to have slipped from the control of its democratically elected government to the dominion of Muslim extremists.

The last time the news channel declared areas in France and the UK no-go zones for non-Muslims, they were forced to make this apology: “To be clear, there is no formal designation of these zones in either country, and no credible information to support the assertion there are specific areas in these countries that exclude individuals based solely on their religion.”

And by those standards, another apology is due.

Hey @paultilsley, a group of students from @Journ_SA are working in Mayfair and Fordsburg as we speak – only one of them is Muslim.

There is no formal designation of streets in control of Muslim extremists in either Fordsburg or Mayfair. And the only information supporting the assertion that there are specific areas that exclude individuals based solely on their religion is from Tilsley himself.

As a journalist, Tilsley came here with a preconceived idea of the place and he found any excuse to give life to his idea of Mayfair being under the control of Muslim extremists. He wasn’t allowed to shoot outside the mosque, yes, but he has no evidence for any of the other claims he makes to support his conclusion for what those reasons might have been.

It is easy to lampoon Fox News, but this is particularly bad journalism.

Tilsley, above all else, seems to avoid treating people here as humans with their own experiences. What he does is relegate the thousands of people who live and work here as the nameless, faceless subjects of his greater experience.

Enjoyed this piece? Help us to keep doing what we do by donating to our crowdfunding campaign here.

All images by Khadija Patel