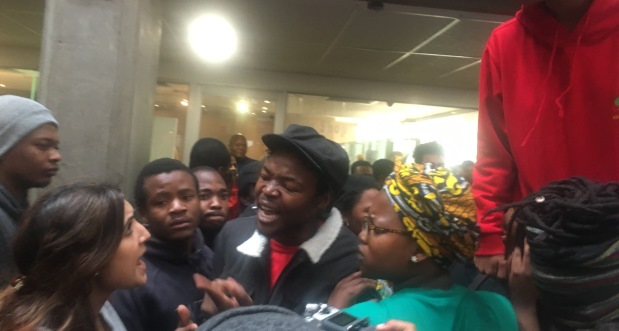 The Fees Must Fall (FMF) movement which has re-emerged at universities nationwide has been criticised for being disjointed. But to understand why students have had difficulty forming a unified movement, you have to understand the political divisions that exist on each campus. And, contrary to what higher education minister Blade Nzimande would have you think, itâ€™s not just about students being anti-ANC.

Traditionally, Student Representative Councils (SRCs), which include members of the student arms of national political groups such as the ANC and DA, have represented the collective interests of students on university campuses. In the past year, deep divisions have sprung up between SRCs and the more recently constituted Fees Must Fall groups, based on party politics, identity politics and questions concerning the way forward for the movement.

Wits may have a unified student movement now but there have always been divided regarding who should lead. On the one hand, there is the SRC which is made up entirely of (ANC-aligned) Progressive Youth Alliance (PYA) members. On the other hand, there is the Fees Must Fall movement which is argued to be aligned with the EFF Student Command (EFFSC).

A feminist caucus in FMF as well as other feminist students, identified by the sjamboks that they have taken to carrying at protests, have also rallied over questions of feminism, patriarchy and questions of the legitimacy of the PYA-led SRC.

Running counter to this is the #Back2Class movement which wants academic activities to be resumed at the university.

As with Wits, the student movement at UCT also presents a united front. However, there are clashes between the SRC, which is also PYA-led, and the so-called â€œ#ShackvilleTRCâ€ protesters.

Earlier this year, students who erected a shack on upper campus to highlight the housing crisis at the university, and later vandalised nearby residences, were suspended and charged with assault, arson and hate speech, to name a few. #ShackvilleTRC are made up of those who protested for the charges to be lifted.

The #ShackvilleTRC group rejects student movements affiliated with PYA and Sasco-led structures who are aligned with the ANC. They are comprised of progressive candidates for the SRC. the Pan Africanist Student Movement of Azania (Pasma), Black Land First (BLF), as well as a number of non-partisan students.

Alongside this is #ReOpenUCT, a movement by students who believe university should remain open and that students should be allowed to protest simultaneously.

Right. Thereâ€™s currently a split between the SRC and Daso on the one hand and the rest of the student leadership, based on events that took place during the protests. (Which may or may not involve who got pizza and who didnâ€™t. We are not joking. This was legitimate grounds for beef.)

The conflict started last week Wednesday when the SRC and Daso opposed the decision to protest at the Boardwalk Shopping Centre, then failed to show up to the police station to support the NMMU9 who had been arrested after earlier protests. The SRC maintain that they were chased away by other FMF leadership.

As a result, Daso and the SRC were excluded from Thursdayâ€™s mass meeting and their appeal to explain their actions on Friday were denied. FMF leadership, as well as majority of the students present say the SRC and Daso arenâ€™t recognised as part of the movement due to resolutions taken at the mass meeting.

NMMUFMF considered starting a petition to â€œdissolve the SRC as the students had lost confidence in itâ€.

More than 500 students are protesting outside City Hall refusing to accompany the #NMMU SRC to 2nd Ave Campus for a public meeting. pic.twitter.com/rvK3o7LYsm

A â€œFed up Students – NMMUâ€™â€™ Facebook page (made up mostly of parents and students), calling for the continuation of academic activities, has also emerged.

The two groups differ on the how to take the protests forward. The SRC and Daso want campus to reopen and they want to direct their grievances to government institutions. On Monday, they campaigned to mobilise students to march to governmental departments at the City Hall at 10am. The rest of the collective met at the Kraal, a central plaza and the main meeting point for protestors, where management would be given a chance to respond to the memo presented to them last week.

On Tuesday, the SRC and Daso planned a march to reopen the university.

At UP, the main players in the movement are Sasco, Daso, EFFSC and Pasma. Last week, the groups banded together to form a collective UPFMF movement. All parties joined except Sasco, which claims they are waiting for management to make a decision on fee increases.

Sasco, whose members are not formally elected, generally take the lead at UP. However, there has been such dissatisfaction with Sasco, that students have even burnt Sasco t-shirts to show their ire.

AfriForum, meanwhile, forms part of the opposition to FMF and wants students to go back to class.

At Stellenbosch, the movement was headed by feminists who were among the founding members of #SFMFDefiance and #Occupy4FreeEducation.

They had two tools of engagement in the movement:
1. Prioritise voices of black womxn and
2. No sexism, racism, homophobia, transphobia, classism, ableism, misogyny, misogynoir, patriarchy, etc will be tolerated.

Some male SRC members affiliated with Sasco have since taken over the movement from #SFMFDefiance, whose key members have been interdicted or suspended. This is despite the original tools of engagement, which emphasis prioritising the voices of black womxn. These SRC members have are also been accused of being politically aligned with to the ANC and the EFF.

At UCKAR, the legitimacy of the SRC is also under fire. The student body in general is distrustful of the SRC, which is perceived to be illegitimate, owing to its history of poor leadership and lack of accountability to the students.

The SRC has been accused of being puppets to management, and students sometimes mockingly refer to the SRC as â€œthe MRCâ€ (Management Representative Council).

In a meeting on Tuesday, the SRC asked to join the FMF collective. Their request was granted but they have only been allowed to join in their capacity as students, and not as part of the student leaderships running FMF.

The gathering concludes that the SRC can join, but they will join as part of the student body, not as representatives #UCKAR #FeesMustFall

So if you can keep track of just some of that, youâ€™re on your way to understanding why there is no homogeneous student movement and why itâ€™s difficult to speak about â€œthe studentsâ€ as a generic group.

Editor’s note: The headline of this story was changed.Â