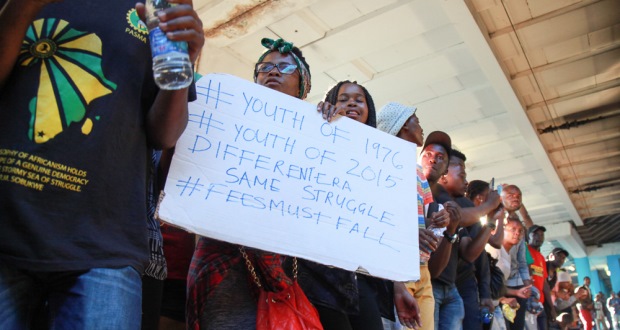 On Sunday, amidst growing tensions between police and protesting students in the Western Cape, parents of students who attend the University of the Western Cape (UWC) and the Cape Peninsula University of Technology (CPUT) issued a statement declaring their support for the Fees Must Fall campaign and their reasons for supporting the students. Below is the full text of the statement.

We are parents of students at the University of the Western Cape (UWC) and CPUT. We are in support of the Fees Must Fall campaign. We know our children. They are not violent nor hooligans. We strenuously reject the crude propaganda of university management to cast them in this light. This is nothing short of attempting to criminalise the student struggle so as to avoid negotiating with their legitimate demands and grievances.

As parents we do not condone violence. We do not believe, however, that there is a symmetry between the violence of armed police and private security forces that indiscriminately shoot at students and their resistance.

There is a pattern of behaviour from those in power and their armed forces, which got its most heinous expression in the Marikana massacre that suggests that when protests are directed at authority, there is no need to engage. Rather the security forces are substituted for political processes. Those in power and authority wish to buffer themselves from legitimate protest, anger and frustration of those in society who are yet to taste freedom.

We also believe that it is important to contextualise the student confrontations. In most cases it emerges as frustration with high-handed and unaccountable behaviour of the university management. We understand that the recent clashes on the UWC and CPUT campuses resulted from failure to meet with the students and the practice of reneging on agreements.

As parents we are also workers. We are very mindful of the deteriorating situation of workers at both UWC and CPUT. We stand in total support for workers to be directly employed by the universities. In other words, we oppose outsourcing and support the call for insourcing.

In the interest of overcoming the present impasse and polarisation we call on the UWC management to:

Should this be done, we are confident that a lasting agreement can be reached.