Home Features After Monday’s event at Wits we know the student movement has been...
WhatsApp
Facebook
Twitter
Email
Print 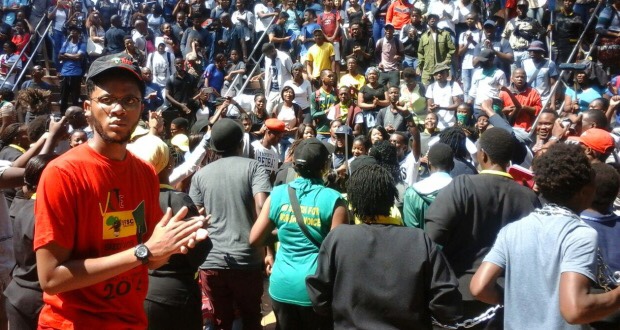 In the confusion of an attempted campus shutdown at Wits on Monday, the national student movement suffered a severeÂ fragmentation. And it’s not like the movements across campuses this year have been a testimony to unityÂ anyway. AAISHA DADI PATEL rounds up.

A protest at Wits University on MondayÂ did not outline any specific demands, and many students – including those involved in the movement – questioned its legitimacy, after it came to light that secret and closed meetings had been held over the weekend. The labelling of the movement as â€œintersectionalâ€ was also doubted when it emerged that some Â members of the movement regarded feminism and consideration of LGBTIAQ+ rights as divisive to the movement. Many called out the patriarchal cultureÂ characterising the movement, and spoke against defending student leaders who were violating women.

While reasons for the protest were not made clear, there were a number of speculative theories proffered. And certainly the presence of student activistsÂ from other campuses, like UCT’s Chumani Maxwele, was unusual. While many said that the protestÂ concernedÂ issues of financial exclusion of students, outsourcing of workers, the call for free education, and students with charges against them; some also said that there were larger political agendas at play.

Furthermore, allegations of assault by student protesters surfaced.Â In a statement released by Wits students aligned to #FeesMustFall the alleged assault was slammed.Â “Feminist and queer bodies were assaulted, strangled, kicked and beaten by these black men in the service of the black revolutionary project,” the statement says.

The crux of the discontent goes back to reports that a meeting of student leaders from across the country was held over the weekend, but feminists and queer bodies were specifically excluded.

“Through reliable sources and substantive evidence, we know that the plan to shut down the Wits campus was discussed at a private symposium this past weekend, convened under the banner of Fees Must Fall, the invite to which was not extended to the broader Fees Must Fall movement on different campuses as well as the explicit exclusion of feminist and queer persons,” the statement from Wits students says.

This is how the partial shutdownÂ unfolded.

Students returned to Wits on Monday after the Easter break, and around 10am disruptions began.

A group of students – allegedly led by representatives of PASMA (Pan Africanist Student Movement of Azania) and the EFF (you all know who they are) – began disrupting and shutting down classes on East Campus. Equipped with fire extinguishers and apparently teargas, the group moved through campus with intent to shut it all down.

Students in libraries were removed and fire extinguishers opened, and the group then moved down to student mall The Matrix, which was also then shut down.

The group then moved to West Campus, where they shut down lectures happening in various buildings.

Classes have been shut down on West Campus. Venues on East + tests also disrupted (pics via @priyankha94) #Wits pic.twitter.com/5XBmxv9a2C

The crowds were then gathered outside the FNB Building on West Campus, where they were addressed by the leaders of the protest, which included Rhodes Must Fall movementâ€™s Chumani Maxwele.

#Wits clashes between feminist, non binary people who say the protest is exclusionary and patriarchal pic.twitter.com/S8ei5u7rWh

After Pambo addressed the crowd once again, the SAPS ordered students to disperse or face prosecution. While protests quickly died out, a lecture venue in the Umthombo Building was also torched.

The aftermath of #Wits lecture venue U11 being burnt by Protestors for #FeesMustFall Lecture Hall tapped off pic.twitter.com/7PzDzuR9Ji

All seats inside have been burnt. Fire department on the way https://t.co/EeQJLoDs3I

The university released a statement on Monday night stating that they condemned the disruption â€œin the strongest form.â€

â€œWe believe that todayâ€™s protest is a politically orchestrated campaign with larger national objectives. The individuals who addressed the student groups today were from Wits, other universities in Gauteng, the Western and Eastern Cape and some political parties. The individuals were calling for free education for all now. The University has requested the police to intervene and to arrest the individuals for their criminal behaviour and for contravening a court order that was granted earlier this year. These are criminal acts and the University will deal with this matter decisively using all means at its disposal. Suspension orders are being issued to individuals who are Wits staff or students and barring orders have been put in place for all non-Wits members who engaged in illegal activities.”