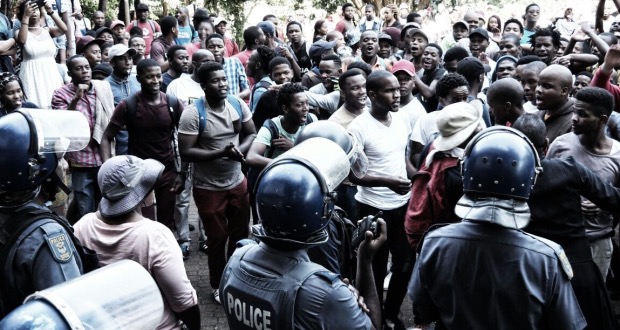 On Thursday afternoon, students at UKZN Howard clashed with police when students attempted to start a shutdown after several students disrupted classes. Policemen armed with tear gas and rubber bullets approached the crowds while a pastor tried to mediate between students and the police. The Daily Vox Team were there and captured these images.

Students were dispersed when policemen fired rubber bullets and tear gas at student. One student was arrested for supposedly leading students in the disruption of classes.

A student activist who is a member of the student arm of the Inkatha Freedom Party has spoke to The Daily Voxâ€™s Kwazi Dlamini regarding the protests. Students gather for the commencement of the shutdown. Police officers were on the scene watching over the crowds.

#UKZN Howard: The pastor arguing with the police. #FeesMustFall2016 pic.twitter.com/eUMPpUgL2L Students wait on the steps to be addressed by leaders. Policemen surround the pastor who attempted to mediate between the police and students. Police watch on as students discuss their plan of action.

Stun grenades have been fired at #UKZN Howard and students have dispersed. #FeesMustFall2016 A student raises her fist as she addresses the crowd while behind a placard behind says: We are students #UKZN not criminals. God Bless Afrika. Students look on and one student holds a sign saying Fees Must Fall and the name of a company King Sneakers. Students sing and dance, holding up Fees Must Fall placards.

#UKZN Howard: One of our reporters has been speaking to police who told him that they don't care who he is and that he must leave. #UKZN Howard: The police officer also said the only reason he was giving the students a chance was because of the pastor. #FeesMustFall2016