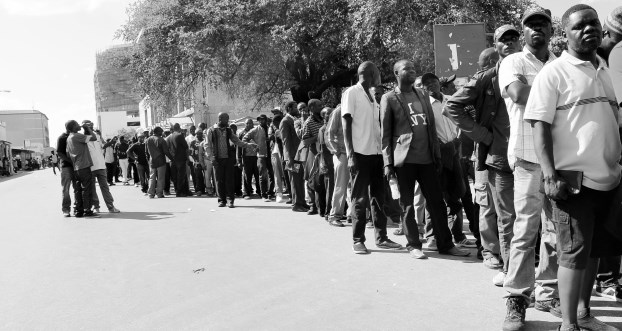 From the chilly wee hours of the morning right into the long blazing afternoon sun, millions of Zambians around the country queued up waiting to cast their votes in closely contested parliamentary and presidential polls held on 11 August.

Local elections, as well as a constitutional referendum on the bill of rights were run alongside the general vote, so in just one day, the people voted for a new president, parliament, mayor, council and a bill of rights.

And you thought South African local elections were confusing with two or three ballot papers.

A new electoral law requires the winner of the presidential vote wins by 50% + 1 vote so it’s all bets in for who will lead Zambia between frontrunners President Edgar Lungu of the Patriotic Front (PF) and Hakainde Hichilema of the opposition United Party for National Development (UPND).

This is the first time all nine of the presidential candidates needed to have a running mate to avoid a presidential by-election, in case the president passes away in office. This is actually more commonÂ than youâ€™d think – two presidents have passed away while holding office in the past 10 years.

In the referendum, Zambians voted on whether to amend the bill of rights which gives Zambians rights to food, shelter, employment and healthcare. It also bans homosexual acts, abortion and raises the age of consent to 19. Many civil society groups had criticised the decision to carry out the referendum on the same day as the elections, saying that an amendment to the bill of rights in an important matter and should be done separately with elections. The Zambian government ainâ€™t got time for that, clearly.

Current president, Edgar Lungu, won the last election which took place after the sitting president, Michael Sata passed away. He won the emergency election by just 27, 000 votes, which could be one of the reasons why the 50% majority vote rule has been constituted. Sata passed away in 2014 at the age of 77 in London from an undisclosed illness.

This yearâ€™s elections were characterised by pre-election violence, where there has been fighting between the ruling PF and the main opposition, the UPND. Three people have been killed in the fighting and many more were injured. The police have also stopped the opposition from campaigning and the running mate of the opposition leader was teargassed during a police raid. Zambiaâ€™s daily paper, The Post, which has a reputation for criticising both the government and opposition was also closed down earlier this year for tax reasons but many have said that it was actually a political ploy to silence those who speak out against power. The UPND has also accused the ruling party of corruption and being unable to contain the economic crisis which is affecting the country as a result of the falling copper price (copper makes up for 70% of Zambiaâ€™s exports) Â and the drought-induced water shortages. The president has also threatened to call in the army if the opposition rejects the results of the vote.

The results are due to be released by Sunday, but if neither party gains 50% or more of the vote, there will be a second round of voting which will take place within 37 days to be contested by the top two parties.