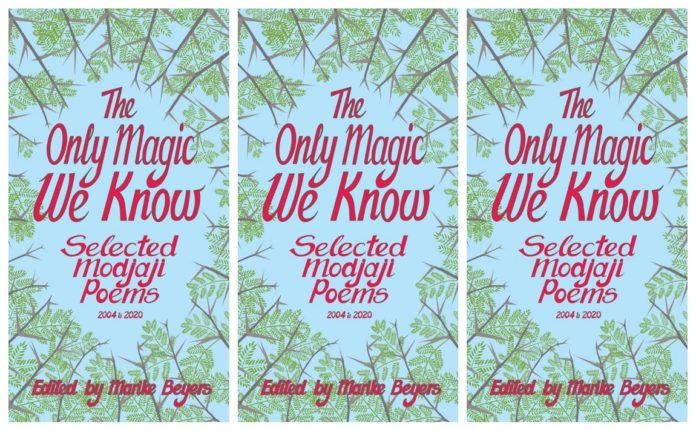 The Only Magic We Know is the latest poetry collection from Modjaji Books. It is a “celebration of Modajaji Books as an independent feminist publisher of women’s poetry.” The poems contained within the poetry have been selected from the forty-six collections of poetry published by Modjaji since 2004. The poem The offending document by Tariro Ndoro is republished below.

The offending document by Tariro Ndoro

It could be any handbag; it could be a messenger bag with extra-long straps, a designer bag with large Louis Vuitton logos or a scuffed black one that looks cheap. Let’s assume it is the scuffed black one, it is the one you see most often. We must assume that its owner is stressed – that is how she walks, that is how her nostrils flare. Her hair looks frustrated, that is to say, it was once relaxed, and now it has growth; and since she’s been hustled all day, the hair stands on one end. There is sweat on her brow and she is wearing a frock; yes, a frock because it is floral and black and made of cheap rayon. Her outfit is completed by knock-off tennis shoes that are not of the Tommy variety but she still calls them “matomi”. Yet this woman is just like the twenty-something woman with dreadlocks (we pray to God she’s not smoking mbanje). Her nose has a stud in it, another cardinal sin, and she too is frustrated. This can be attested to because she is telling her boyfriend, quite eloquently, on her iPhone.

It is true the older woman’s bag is heavy because of the old Nokia phone she’ll never replace, the one ply tissue paper still on its roll (in case she has to use a public toilet) and an old Fanta bottle full of water. Her wallet is just as scuffed as her bag but that doesn’t deter her – most of her money is in her bra anyway. The younger woman carries a bottle of mineral water, chewing gum, a book and a passport. It is this document has relegated them to the same fate. For now, the two women might share a camaraderie, a complaining together if you will, but after they’ve crossed the border, one will head for a bus station in Joburg where she will sleep under a truck for R2 a night until she has enough 174 merchandise to sell at home, the other will take the Gautrain to Marlboro where her aunt lives and spend her days between Gold Reef City and Sandton. For now they are equal because of that offending document.