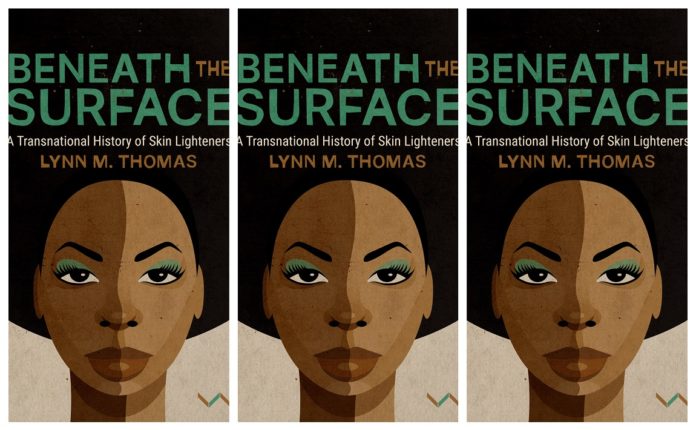 Lynn Thomas, author of Beneath the Surface: A Transnational History of Skin Lighteners answered some questions about her work.

Can you tell us your inspiration for writing the book?

My original inspiration dates back when I went to Kenya as a college graduate. While there, I saw that skin lighteners were a commonplace but contested part of Kenyan popular culture. Around 2000, I became involved in a research project called “The Modern Girl Around the World.” That research project aimed to trace out the figure of the modern girl. Together, we examined cosmetic advertising as one realm where the modern girl first emerged. In examining those ads, I learned that in the early twentieth-century skin lighteners were very popular cosmetics, especially among white women. This fact spurred me to dive deeper into researching their history.

What did your research entail?

My research entailed work in four countries: South Africa, Kenya, the UK, and the US. I spent much time combing through the archives in Washington, DC to figure out the history of active ingredients used in skin lighteners. I spent time in South Africa’s public libraries combing through medical journals and popular magazines like *Drum* and *Zonk!* that were saturated with skin lightener advertisements during the 1950s and 1960s.

I undertook interviews in Kenya and South Africa with people who manufactured and marketed skin lighteners, people who opposed them – both medical professionals and anti-racist activists, and people who used them. My favourite interviews were with South Africa models who taught me so much about how shifting beauty standards shaped their own lives under apartheid and afterwards.

We know there many different beauty standards that exist and a lot of them are harmful. However, with skin lightening, there is also the element of adopting European standards of beauty. Can you speak to this idea and what it means?

The proliferation of European standards of beauty through the deeply unequal history of slavery, colonisation, segregation, and apartheid is a very important part of the history of skin lighteners. There’s a longer history of preferences for pale and smooth complexions that extends across much of the ancient Mediterranean world and into parts of Asia. In premodern China and Japan, for instance, elites used white lead preparations and rice powder to achieve complexions resembling white jade or fresh lychee. In pre-colonial Southern Africa, people used rich red ochres mixed with fats to brighten their skin and to protect it from the elements.

From your research, how does South Africa compare with the rest of the world?

What else would you like to do with your research?

I would like my research to bring heightened awareness to the persistence and expansion of global trade in skin lighteners, and the fact that most countries already have regulations in place to tackle the most toxic elements of that trade. We need viable government institutions to enforce those regulations and safeguard consumer health.

How did you navigate your positionality in writing the book? Was it difficult?

My positionality as a white American woman certainly influenced the shape of the book. As a white woman, I occasionally met people who thought the skin lighteners was an odd or inappropriate topic for me to tackle given how ongoing histories of anti-black racism and white entitlement had enabled my own privileged position. I tried to explain that it was my aim to document how those very histories had shaped the past and present of skin lightening.