The first School and Campus Safety Summit held at the University of the Western Cape discussed campus crime as well as security issues arising out of Fees Must Fall. The summit ran from the 12-14 July and was organised by the South African Police Service in collaboration with the departments of basic education and higher education and training.

The summit was arranged to address crime in schools, colleges and universities in South Africa. It was reportedly attended by various stakeholders from the security industry, safety representatives, students, and university officials. Participants discussed issues around safety on campuses, insourcing and outsourcing, and training of security in dealing with students during Fees Must Fall protests.

The summit was initiated in reaction to students calling for the removal of security officials from campuses as well as the various crimes that have hit campuses such as attacks on students and abductions.

Stephen Ngobeni, one of the organisers said, â€œWe want to make sure that there is a situation of order and that then gives rise to a climate where there can be learning and teaching and research on campus and the purpose is to ensure that students in particular feel safe, managers feel protected and the environment of teaching and learning exist.â€

Manabela Chauke from the Private Security Industry Regulatory Authority said: â€œOur priority was to ensure that all studentsâ€™ rights were protected. I stress that it was regrettable that during the #FeesMustFall protests, some private security companies ended up being involved in crowd control, which is not their mandate.â€

Police and private security came under a lot of criticism last year during the Fees Must Fall protests about the way they dealt with students. Questions were also raised about whether private security are equipped to deal with campus protests. Many students said that the presence of the private security on campus exacerbated the situation. Private security were also accused of sexual harassment by students and excessive violence against students.

Chauke also said that institutions of higher learning should make sure that the private security on campuses protect the assets of the university and that public order policing be left to the SAPS.

One of the speakers at the conference, Dan Carter who serves as the president of the Safety Advisors for Educational Campuses in the United States, said there needs to be greater transparency about the documents relating to institutional safety.

Carter said he thinks in light of Fees Must Fall, South Africa can learn a lot from the US on how to form good relationships between students, private security, and university management. Carter referenced the USA Clery Act which says that all federally (government) funded institutions must make their crime statistics known.

The issue of private security on campuses is a contentious subject, especially in light of the private security violence seen on South African campuses during the Fees Must Fall protests as well as the violence that students face daily. With such pertinent issues that discuss students directly being discussed, itâ€™s a wonder why the summit was not better publicised and attended. 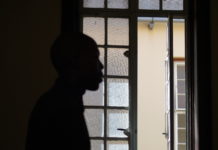