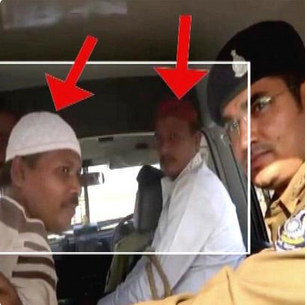 Righteous indignation erupted over social media networks across India on Thursday when it was revealed that cops in the eastern state of Gujarat had committed a serious boo boo.

Turns out Indian police in Surat held a ‘terror drill’ ahead of two fancy events in the state, and during the cops and robbers sequence (the police had to chase a fake terrorist/enemy of the state) they made the guys wear mosque hats as part of the role play.

Yes – they had to play Muslim terrorists.

A video released to Indian media this week showed showed the shocking images that categorically links Muslims with terrorism, and well that’s how everyone found out.

Ugh. #Stereotyping in India is getting way out of hand. Muslim ‘terror drill’ draws outrage in India. http://t.co/9ddHiqyZeN

The police told reporters that the incident was avoidable and that it should have never happened.

But whereas the police are trying to brush off the incident as “an error”, others are pretty sure its fits part of a growing and worrying trend to stereotype minorities.

Communal tensions are on the rise in India. And since Narenda Modi became PM earlier this year, the country is seems to be headed in a new direction.

Writing in Scroll.inÂ on Wednesday,Â journalist Shivam Vij said that despite the country’s constitutional commitment to secularism, Modi was pushing the country towards a theocracy. He says:

The [PM] Modi governmentâ€™s assault on Indian secularism lies more in his silence than in his statements or actions. Soon after he came to power in May, a young IT professional in Pune was lynched to death for merely being seen with a beard and a skullcap. Since then, not a week has passed without some action or statement by radical Hindutva outfits against Indiaâ€™s religious minorities. Churches have been mysteriously burnt, adivasis have been beaten up and others made to participate in Hindu â€œreconversionâ€ ceremonies, Muslim men have been falsely accused and put in jail for â€œlove jihadâ€, anti-Muslim riots have taken place in Gujarat: the list is endless. Modi did not so much as condemn any of these. In a bizarre statement from the Red Fort on Indiaâ€™s Independence Day, he appealed for riots to be stopped for ten years, as if to say they could resume after that.

If Shivam is even half right. If not, its all cool. You can go back to what ever it was you were doing.

Meanwhile, back to the mosque hat story, you can read the full story here on Al Jazeera.