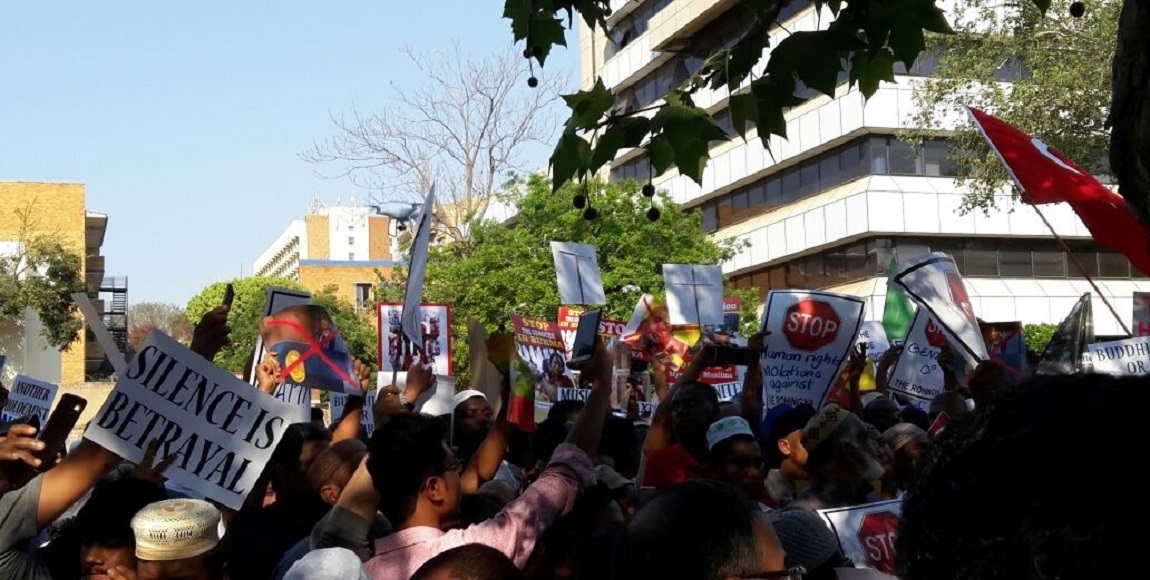 About 500 people gathered outside the Myanmar Embassy in Pretoria on Friday to protest the ongoing violence against the Rohingya Muslims. But the protest was marred by altercations between protesters and police.

The advocacy group Protect The Rohingya, which had organised a Rohingya solidarity march to the Myanmar embassy, were unable to hand over a memorandum to officials after a group of protesters threw stones, water bottles and trash at the embassy gates. Police fired stun grenades to disperse the crowd.

Social activist Yusuf Abramjee, who was at the march, said a few rowdy protesters had spoiled what ought to have been a peaceful protest. â€œA section of the crowd started hurling objects at the embassy, injuring two people. Police also used teargas. Some protesters were out of line and their behaviour is unacceptable,â€ he told The Citizen.

Another protestor, Ncobile Dlamini, told The Daily Vox he thought the police response was excessive. â€œItâ€™s not like they [the marchers] were going to break down the gates or something,â€ he said.

Shabnam Mayet, one of the organisers of the Johannesburg protest, said the local Bangladeshi community were â€œthe most emotionalâ€ because the Rohingya are their neighbours.

â€œOver the past three weeks weâ€™ve had over 400 000 people fleeing their homes. There are more than 80 sites where villages have been burnt entirely and the government is implementing a scorched earth policy. We have babies being beheaded,Â  mass rapes of womenÂ  – itâ€™s really horrific and brutal,â€ she said. At the Pretoria march, speakers from different faith groups called for Aung San Suu Kyi, the de facto leader of Myanmar leader, to step down and to give back the Nobel Peace Prize she received in 1991. Members of the crowd also called for the Buddhist monks thought to be responsible for spearheading the attacks to be labelled as terrorists.

Mustafa Ali, a protestor from Mayfair, said heâ€™d joined the protest to show solidarity with Rohingya Muslims. â€œWe are protesting because they are weak and they are the minority; they are being displaced and they are being persecuted â€¦ They have not been given any priority. They are denied their right of freedom of movement, or education, right to marriage or anything,â€ he said.

Over a thousand people marched to ParliamentÂ in Cape Town earlier this week to demand that the Myanmar government take responsibility for the atrocities being committed against the Rohingya and called for the South African government summon the ambassador of Myanmar.

The Rohingya are stateless, caught between two countries – Myanmar and Bangladesh – that do not want them. Their rights have been restricted, they have been driven from their homes, and their villages have been systematically burned. The Rohingya have been described as the most persecuted minority in the world.