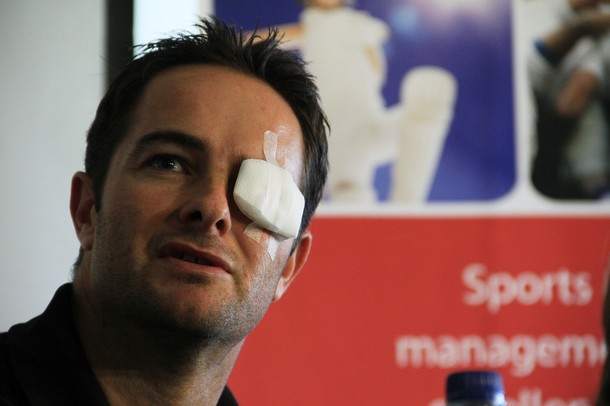 Mark Boucher, the legendary South African wicketkeeper, has been called up to join the Proteas squad for the second test match against England in Cape Town.

Boucher, known for his silver covered testie, was reportedly asked to rescue the team following the Proteas’ dismal performance in Durban, where they lost by a record 241 runs.

A source close to the team told The Daily Vox that Boucher, who played for the Proteas between 1997-2012 before an accident on the field forced him into early retirement, will play in the specialist wicketkeeper/batsman role, releasing AB de Villiers from duties behind the stumps.

“This way, AB will stop sulking like a brat and threatening the team with early retirement,” one commentator said.

Concerns are that if Boucher, who only has one eye, enters the fray, selectors would be faced with difficult choices in respect to balancing the make-up of the team.

“There are already too many disabled players in the team,” one commentator said.

But our source close to the team said selectorsÂ were willing to sacrifice two white players in order to include Boucher into the make-up.

“They’d rather have a one-eyed man with two balls of steel rather than some of the pansies they currently have in that team right now.”

“Instead of blaming the black players, selectors know that they don’t make white boys like they used to,” the source said.

Abu Oâ€™Well is a satirist and an inciteful contributor to The Daily Vox. Sometimes he is teasing, sometimes heâ€™s not.