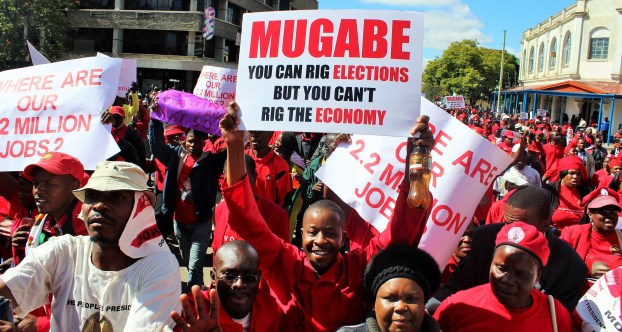 The people of Zimbabwe are angry. They’ve been stewing for a long time and now it’s starting to show. Minibus taxi drivers in the poorer satellite areas east of the capital, Harare, demonstrated on Monday against the increasing number of road blocks and the accompanying fines police demand are paid on the spot.

Around the country, teachers, nurses and doctors are threatening work stayaways and strikes of varying degrees because they’re unhappy with receiving delayed salaries as a broke government struggles to pay its employees. As the country’s economic crisis deepens, people find no comfort in silence and citizen movements are popping up in all forms, calling for aging President Robert Mugabe and his cabinet to go. But the government seems unphased, suggesting there’s a political force in recent events.

Alternative protest is on the rise in Zimbabwe

The standard go-to line is that there’s a regime change agenda driven by Western-sponsored opposition elements, but the truth, however, may be a lot simpler. No civil servant likes receiving a late or partial salary and no driver likes getting a spot fine for road traffic offences that can include having an expired vehicle registration, not having a valid fire extinguisher, a reflector vest or a radio licence â€“ whether one listens to radio or not. Penalties start from $10 and because the police no longer have the books to issue a seven-day notice to pay, one must pay immediately or risk having their car impounded.

Kombi drivers, whose vehicles are not always in the best shape, get stopped at numerous checkpoints and a significant share of a day’s fares can go to paying fines or bribes. It’s no secretÂ that some officers prefer their palms being greased rather than issuing tickets and it’s not uncommon to come across suspicious checkpoints set up for personal gain. These numerous forms of police corruption are among the reasons why theÂ Minister of Home Affairs said Â the measures would soon be scrapped. It’s been almost two months since that promise, and even though Minister Ignatius Chombo acknowledges there are too many checkpoints and admits there’s no actual law guiding the issuing of spot fines, police are still setting up more roadblocks and issuing tickets to increasingly irate motorists.

Much like Friday’s violent protests in the southern border town of Beitbridge over a ban on selected basic imports, Monday’s riots and those in the making are a clear sign of a frustrated nation. Unfortunately, public displays evoke a predictable response of fury from the authorities, and those who live in areas such as Harare’s Epworth or Mabvuku and Dulibadzimu in Beitbridge will bear the brunt of that wrath in curfews, house searches and arbitrary arrests which mirror past periods of state violence in urban cleanup operations, roundups of opposition figures and activists and squatter camp raids.

Zimbabwe’s discontent is yet to reach critical mass, but if protests rise to that level, our broke regime should know it can’t keep resorting to the same teargas and baton stick routine. Beating and arresting people only stops them for a time, but the more the economy sinks, the angrier people become and the more things fall apart. The centre cannot hold.