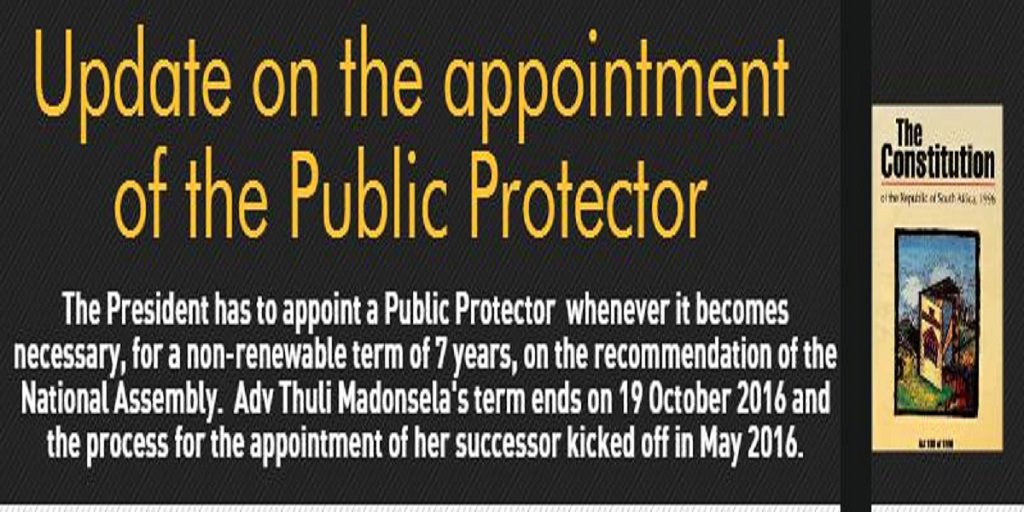 How awks would it be toÂ haveÂ your job interview broadcasted live on national television? And then, have your files pulled out ofÂ the archives even Black Twitter hasn’t found yet. And then getting grilled for skeletons you forgotÂ were hidden in the closet?

The interviews of candidates hoping toÂ take over from Public Protector Thuli Madonsela are under way in the National Assembly with only half of the candidates interviewed in the past nine hours. It’s going to be a long day in the office for some of the honourable members. Â Eight more candidates are to be interviewed within the remaining five hours, as the interviews are set to end at 11pm.

We’re not seeingÂ Baleka Mbete-induced levels of chaos but itâ€™s been lit.

“She’s suspended from her current job. But she wants to be the Public Protector” Floyd Shivambu on Mamiki Goodman #PublicProtector

And then she shaded current Public Protector Thuli Madonsela.

“To tell you the truth, she is somebody I wouldn’t want to work with, or even be friends with”.

Uncle Joshua Doore, aka Judge Siraj Desai had his Mumbai file pulled from the archives. And was quarter to losing his shit.

Desai on rape allegation: I was never acquitted, I was not convicted either. The allegation was withdrawn under oath.” #PublicProtector

Desai: What offends me is the arrogance of the white middle class!

Van Damme interjects: You see, you are now angry and proving my point.

Advocate Chris Mokotidwa disclosed his age and compared running the Public Protector office with the Soweto Marathon. Also, shouldnâ€™t you be retired at 77?

“My age 77, i don’t hide. I’m fit. I’m a body builder! I walk the Soweto Marathon. If I can do that, then this is nothing.” Chris Mokoditwa