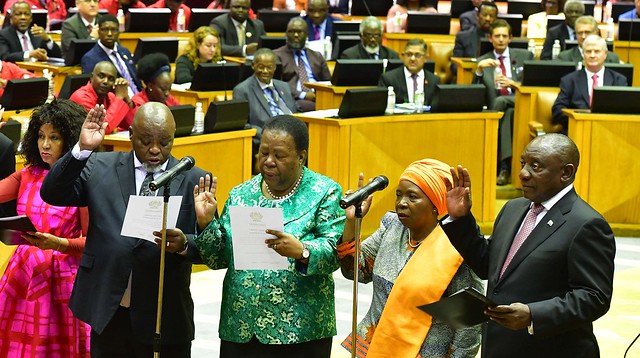 The announcement of the first cabinet of the 5th administration of a democratic South Africa is highly anticipated. Cyril Ramaphosa was inaugurated as the President of South Africa on May 25. From that moment, South Africans were already speculating who would be in the cabinet.

On May 26, the Presidency announced that the announcement of the members of the new executive will be made later in the week.

“The Constitution of the Republic stipulates that the President must assume office within five days of being elected by the National Assembly – and thereafter appoint a Cabinet and assign its powers and functions,” the Presidency said in a statement on Sunday.

“President Cyril Ramaphosa is emphatic that the new executive must possess requisite skills, experience, representivity and a commitment to the public services that will take the work of the sixth administration forward,” the Presidency said in response to reports that Ramaphosa was going to announce the cabinet on Monday.

There were whisperings that Ramaphosa delayed the announcement to allow for internal processes within the African National Congress (ANC) to be completed. David Mabuza, Pravin Gordhan and Zizi Kodwa are just some of the high profile members with cases pending against them.

“Ramaphosa is quite adamant that people will need the skills to do the job and commit to service delivery.”

During the swearing-in of MPs, many young people were included on the ANC’s list. They included Nompendulo Mkhatshwa, youngest MP Itu Mavuthela and Collen Malatji.

Gouws says she thinks the president wants a generational mix of ministers. “I think there will be a mic of older, experienced ministers with an institutional memory combined with younger members [in the cabinet],” she said.

One of the things everyone is sure of is that Ramaphosa will be cutting the amount of people in the cabinet. Under Jacob Zuma’s presidency, the cabinet increased to 36 ministers who oversaw 45 departments. Deputy ministers were introduced in every portfolio.

According to veteran journalist Ferial Haffejee, this was extend his patronage state and to keep the various factions within the tripartite alliance happy. Currently South Africa ranks quite high up in terms of the biggest cabinets in the world. This is in competition with countries which has far bigger population sizes.

Gouws said this was mainly to accommodate the Zuma loyalists.

“We don’t really need that big of a cabinet. If you look at cabinets across the world, cabinets are not that big,” she said. Gouws adds that the problem is that the state salaries of ministers’ now amounts to 48% of the budget.

According to the South African constitution, the president of the country appoints the deputy president, ministers and deputy ministers of the government. He is responsible for assigning their powers and functions, and may dismiss them.

The president may select any number of ministers from the members of the National Assembly. No more than two ministers may be selected from outside the assembly. The previous cabinet – which expired at the end of the fifth administration – had 37 members.

Nelson Mandela announced his cabinet, which was the first democratic one, a day after he took his oath of office. The cabinet included members of the ANC, National Party, and the Inkatha Freedom Party. At the time it was required by law that all parties winning more than 20 seats in the parliament be given representation in the cabinet. He had 25 cabinet members.

The next president of the country, Thabo Mbeki increased his cabinet to 28 members. He added several more portfolio committees. During his second term, the cabinet dropped to 26 members. It was during this term that former president Jacob Zuma was removed from his post as deputy president.

When Mbeki was removed from his post of ANC president and subsequently resigned as president of South Africa, Kgalema Mothlante took over. He had 29 members in his cabinet.

Zuma announced his cabinet soon after taking up the position of president. He has 34 members in his cabinet. Twenty-three ministers were removed during Zuma’s first term. This was either through death, resignation or dismissal. One more minister was added during Zuma’s second to bring the total number of ministers to 35.

Ramaphosa completed Zuma’s second term when Zuma resigned as president. He had 33 ministers in his cabinet which was reshuffled once.

With regards to the many expectations on Ramaphosa, Gouws says that it’s his party’s own making, even if it’s unfortunate.

“We are now in the eye of the world because of the very bad economic conditions, lack of economic growth and the far-reaching reports of corruption. This now contributes to the fact that there is so much pressure on him,” she said.