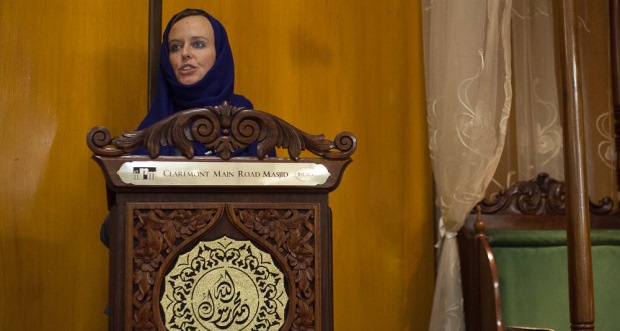 On Thursday, the Claremont Main Road Mosque hostedÂ prominent journalist and author Rebecca Davis to discuss the historical treatment and state of the LGBT community in South Africa. Her talk was part of the mosque’s Ramadaan programme where speakers are invited to give post-prayer talks on different topics each night. Jaamia Galant, secretary of the mosqueâ€™s board, said, â€œWe have talks on all our different activities, but very much on social justice issues that are concerns of our community, and globally.â€

The topic of homophobia and LGBT rights had been on the mosqueâ€™s topic list for some time, but â€œwe looked for a speaker specifically who could also reflect on it in the context of Orlando,â€ Galant told The Daily Vox. Davis’s head was covered in a blue headscarf. To the sound of gracious applause, she walked towards the podium looking comfortable and confident. At this point, half the mosque had left. But not because a gay, non-Muslim woman was about to address the audience. More likely, itâ€™s because the month of Ramadan is in full effect. People are tired. TaraweehÂ (additional evening) prayers are over. And understandably, some want to get home to eatâ€¦ again.

Davis got straight to the point. She greeted and gave everyone a quick news lesson on the recent Orlando shooting. No â€œassalamu alaikumsâ€. No samoosa jokes. Thank you, Rebecca.

On 12 June, in what is regarded as Americaâ€™s worst mass shooting in history, Omar Mateen shot dead 49 gay men at a nightclub in Orlando. Mateen pledged allegiance to ISIL in a 911 call before the shooting, but later reports indicate that no clear links have been found by the CIA. In a TV interview with Univision News, a former gay lover of Mateen stated that he was â€œ100% gayâ€ and was involved in a two-month â€œfriends with benefitsâ€ relationship. One other man has also come forward saying he exchanged messages with Mateen on a social media network geared towards gay men. Elsewhere, Mateen has also been described as a regular at the club he attacked.

According to Davis, theÂ massacre wasnâ€™t only an act of terror, but an act of terror â€œtargeted very specifically at gay people”. A hate crime born of internalised homophobia.

Commenting on the Islamic approach to homosexuality, Â The imam of the mosque, Dr A. Rashied Omar said homosexual sexualÂ acts areÂ not permissible in themselves. â€œWhilst we cannot promote promiscuity, both for homosexuals as well as heterosexuals, we leave God to be the judge of that. We affirm the human rights and the dignity of every individual,” he said.

Homophobia is described as a “range of negative attitudes and feelings toward homosexuality or people who are identified or perceived as being lesbian, gay, bisexual or transgender (LGBT). It has been defined as contempt, prejudice, aversion, hatred or antipathy, may be based on irrational fear, and is often related to religious beliefs.”

In South Africa, the worst hate crime against gay people happened in 2003 at the Sizzlers gay massage parlour in Sea Point. Nine gay men were butchered by two white Christians. In a recent columnÂ Â for the Mail & Guardian, Â Davis noted how obscene it is that the Sizzlers massacre is not better remembered and how many younger South Africans are likely unaware that it even occurred.

â€œBut we in the LGBT community in this country do remember. We remember because what happened at Sizzlers in 2003 and what happened in Orlando a fortnight ago taps into a deep felt fear that many of us carry around.

Itâ€™s a fear that makes itself felt when kissing your partner in public, for instance, cannot be an act of instinct, but undertaken after a split-second calculation of risk, or even of danger. It is precisely this fear, if not of physical harm then of social shame, that drives many of us to gay clubs in the first place.â€

On paper, the South African gay community is lucky. It is the first in Africa and the fifth country in the world to legalise same-sex marriage. But there is a disconnect between whatâ€™s written on paper, said in politics, and the personal ideologies within the majority of the country.

A number of politicians have publicly denounced homosexuality as being â€œun-Africanâ€. In in 2006, then-deputy president of the ANC Jacob Zuma said, â€œWhen I was growing up, a gay person would not haveÂ stood in front of me, I would have knocked him out.â€ In 2007, ANC MP Phathekile Holomisa said, â€œIf you accept this [being gay] you might as well accept people having sex with their relatives or with animals for that matter.â€ And in 2012, Zulu king Goodwill Zwelithini said, â€œTraditionally, there were no people who engaged in same-sex relationships. There was nothing like that. And if you do it, you must know that you are rottenâ€.

It is these statements that contribute to the construction of a society where anti-gay sentiment is normalised and accepted. â€œThis is arguably a form of hate speech far more outrageous than that of,Â say, Penny Sparrow, because it is an actual call to violence. Yet where was the public outcry on that occasion? Where was the South African Human Rights Commission? Where was the media coverage? And where was the condemnation from politicians?â€, Davis asked the congregation.

In a country with a multitude of social problems, gay rights are regarded as a luxury. Davis ended her talk by saying, â€œAs gay people, we donâ€™t need you to embrace us, we simply ask that you let us be.â€