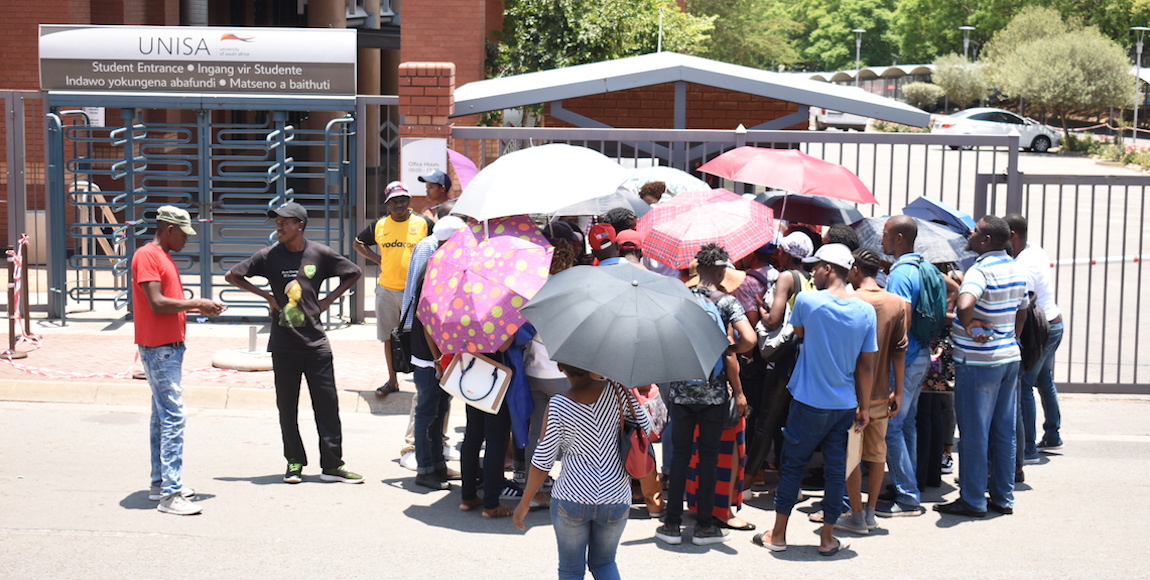 On Friday, representatives from the EFF Student Command protested outside the Sunnyside campus of the University of South Africa (UNISA) in Pretoria, calling for the reopening of application for the 2018 year and the cancellation of registration fees. The protest resulted in the closing of registration for the day as UNISA management met with protest leaders.

Students looking to register were turned away in scores by UNISA staff as the university complied with the call by protesters for all university functions to close for the day. Itumeleng Molefe, a member of the universityâ€™s national student representative council for the EFFSC, said in an interview with The Daily Vox that student leaders submitted a memorandum two weeks ago to highlight their dissatisfaction with UNISA managementâ€™s stance on late applications and registration fees.

â€œWe want them to reopen applications because the president of the country announced that newly matriculated students can register at universities for free. Now the management has been resistant and not willing to act on the issue. So today we expressed that itâ€™s not right that every day students are turned away because they do not have funds to register,â€ said Molefe.

Molefe confirmed that UNISA management had agreed to reopen the application process by Monday, but would be meeting over the weekend to decide on whether university registration would be made free. Molefe said that if managementâ€™s meeting provided a favourable outcome, UNISA registrations would proceed as normal by Monday.
Students and workers unions have additionally been pushing for a 10% increase for worker’s wages at UNISA.

The management has not moved on its proposed increase of 6.5%. In order to add additional pressure to the negotiations, the unions will be holding a vigil and protected strike on Monday. Ntando Sindane, a member of Academic and Professional Staff Association (APSA) workersâ€™ union, said to The Daily Vox management seemed unwilling to compromise.

â€œSalary negotiations started months ago and weâ€™ve reached a deadlock, so a dispute has been declared. So the protest on Monday has been formally processed to add bargaining power to the workersâ€™ demands. We plan for it to be a peaceful yet effective demonstration,â€ said Sindane.

The Daily Vox approached UNISA for comment, but were unable to get hold of them by the time of publication.