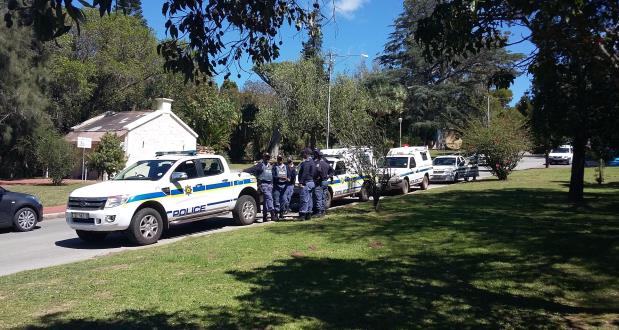 Students and police faced off atÂ the university currently known as Rhodes (UCKAR) on Wednesday,Â resulting in arrests and allegations of police brutality.

UCKAR is in the grips of shutdown with multiple demonstrations and marches on and off campus in recent days. The protests have largely been peaceful and disciplined, with tensions forming around the relations between students, university management and the SRC, who have not been leading the protests.

The UCKAR shutdown has been organised by various student constituencies and is considered a â€œleaderlessâ€ movement, with all students afforded the right to speak and suggest action. The university experienced harrowing police brutality targeting protesting students on 28 September.

The day had started off as usual, with lectures and tutorials resuming after the past weekâ€™s shutdown at the insistence of university management. The SRC had urged students to participate in a mass stay-away in solidarity with the call for free education, but later that day, the students decided to begin disrupting classes again in protest of the universityâ€™s decision to resume activities. The campus had heavy police presence and had been patrolled since the previous night by police in marked and unmarked vehicles. At the law department where students had gathered, police pepper sprayed the group and arrested four students. Students attending the lecture alleged that the police were called to the venue before the protesters arrived, ready to ambush them. The remaining group moved to Purple Fee Square, the designated stretch of road at the border of campus where barricades were put up at previous protests. Here, the group gathered and began singing before multiple police cars arrived and watched as the students moved down the road into campus. Police eventually disrupted the march with stun grenades. The students then gathered at the Drostdy Lawns on campus where police opened fire with rubber bullets, grabbing and dragging students onto the road to arrest them.

A video of the events by student media Oppidan Press shows a police officer telling a woman that they had been shooting students to protect Grahamstown residents and their cars, because the students were carrying â€œbottles and stones.â€

I keep on watching this video. Only shows the cop showing a thumbs up before the shooting, no stones throwed ðŸ’”ðŸ˜­ #UCKAR #FeesMustFall

The protest action and march had been incredibly disciplined and well-organised, and there were no signs of any damage or destruction to cars, roads or university property. The students had marched on the sidewalk of the public road and didnâ€™t block traffic. The decision by the police to open fire and arrest a further eight students is troubling. The manner in which the police reacted to a peaceful student march is no surprise in a country which is currently facing a crisis of police brutality against students. The situation at UCKAR seemed mild compared to most universities until the events of Wednesday, where police action transformed a controlled act of resistance into a chaotic and terrifying scene straight out of apartheid South Africa.

The university management delayed responding to the events until later than evening, with an email circulated stating their concern about the situation and offer counselling services to students and staff.

The Counselling Centre is available for all students who have been traumatised by the events of today.

Students at UCKAR have been in solidarity with the nationwide call for free education and stood in sympathy with the students facing police brutality all over the country. Now, with twelve students arrested and four in the hospital from injuries, it seems we can also empathise.